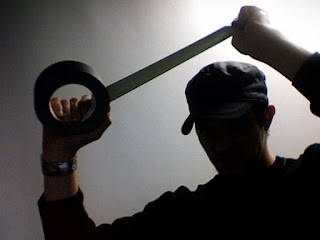 We usually discuss what's going on in the film fest world on Fridays, but Dead Harvey will be taking a break tomorrow... So, no post. However, to make up for it, I've got a great post for you today... and it is about the film fest world. We had the chance to talk with Tom O'Malley, the Festival Director of ACEFEST.

Just to reiterate what I continually blather on about day after day, week after week - the festivals are a very important scene for indie filmmakers. Here's my quick take... you must know that there's a difference between independent film and indie film and I'm not sure that a lot of people know that. Independent film has money behind it. Independent film is, essentially, pet projects of Hollywood guys that are produced and financed outside of the studio system. Indie film, which encompasses micro-cinema and true independent film are films that are not only produced and financed completely outside of Hollywood and the studio system, but they're by people who really aren't part of the system at all. They're truly independent. Obviously there's a bit of overlap here and there, but there's a growing distinction between the two and I think a lot of people mix them up or just lump them all together. Independent film, as far as Hollywood pet projects are concerned, is a dying genre. Without getting into too much detail, I don't think the economics are there for it to work. However, I believe those same economics actually help make the TRUE independent scene flourish. Long and short, TRUE indie film and its fanbase are growing and there's only one place for that growing fanbase to turn if they want to see these films on the big screen, or with a group, and that's the festivals. So, by my math, the market should be able to bear all these festivals... in fact, there's probably room for more in a lot of cities. That being said, both audiences and filmmakers alike need to support them AND the more we do, the better they'll do and the more press they'll receive. The more press they receive, the more press the films receive. The more press the films receive, the better the films do. The better the films do, the more money filmmakers will make. The more money filmmakers make, the more indie films will end up getting made, which almost takes us full circle. Anyhow, long and short, support your film festivals - they're integral to the success of indie film. Attend them, submit to them and talk about them.

Now, regardless of whether you're a fan or filmmaker, you'll want to read this interview about ACEFEST, which stands for American Cinematic Experience FEST. So, no foreign films, please... and that's cool. Each film fest has to have its niche, this is theirs. Formerly referred to as ACE Film Festival, ACEFEST is now in its third year and it's one of the festivals that the New York's indie film scene looks forward to every year. Here now, is our talk with the Festival Director, Tom O'Malley...

Tell us about yourself, how’d you get into the indie filmmaking scene?

The entire ACEFEST staff, including myself, has filmmaking running through their veins. All graduates of various film programs, we've experienced various aspects of the process and simply can't get enough. I, myself, made a short film a few years back that was an amazing endeavor but sucked the life out of me.

Tell us about ACEFEST. When and why did it get started?

ACEFEST was born during my "resting period" of said project. I wanted to take a short break from filmmaking, move to NYC and start a new life - without leaving the film industry completely.

Tell us about a few of the success stories out of ACEFEST.

Something interesting that happens as a festival programmer - the films become your own, almost like your children in a way. With that said, I can't possibly choose just a few success stories. Many of them can be read here.

So, indie horror people will love the fact that Lloyd Kaufman is a judge this year… does that mean we can expect horror to do well?

Although we've always played a horror / thriller here and there in past programs, the looming aura of Lloyd Kaufman is all over this year's event. It's hard to say at this point, but I have a feeling indie horror will have a new home at ACEFEST 2009.

From the perspective of the filmmaker, what can I expect to get out of attending and/or having my film screen at ACEFEST?

ACEFEST has always been filmmaker-oriented. From the minute we announce our program, each selection is promoted relentlessly throughout the industry on a local and national level. Our festival has the intimate capacity to deliver individualized attention to its films, and filmmakers seem to love that about us. Another rare benefit of exhibiting at ACEFEST is sharing one single screen in one single theater. All works are played with equal weight and presence in the program. We've had great success with this model in terms of catching industry, media and press attention for our line-ups.

As an indie film fan, what can I expect to get out of attending the festival?

For the experienced festival-goer, ACEFEST is an established annual event in the heart of New York City with a highly-impressive roster of titles to choose from. For newcomers, ACEFEST is an excellent starting point to the fest circuit. Our simplified programming structure, low ticket prices and overall ease of use makes our event attractive to all.

Which films come in the coolest package. (That's a joke). Our Selection Committee and Judging Panel rate each entry on a number of different points. Works that grab the viewer's attention in the first 4-7 minutes always have a slightly better chance than slow-starting films. Genre and duration are factors that don't really come into play until it's time to program the final line-up.

Not directly, no. It's not uncommon for a high-budget film to have better production value but we are just as likely to pick a $15 video art piece that has substance.

So, in general, why should indie filmmakers try to get their films into festivals?

Festival, for filmmakers, are the equivalent of bands playing shows. You need to get your film out there to a real-live audience. Video sharing websites are great and all, but serious industry producers, distributors and press are going to pay more attention to a theatrical exhibition.

Your efforts and concerns are better spent making your film the best it can be. Don't make works just to impress festivals. If it's good, it'll impress festivals - along with everyone else.

Budget for it in the beginning. Figure an average of $35 per festival submission. Then, don't worry about it until your film is complete or at least near complete.

What advice can you give to an up and coming indie filmmaker?

Make films about what you know. Bring part of your life into your work. If you don't, your audience will see right through it. Take this advice from script to screen in every aspect of the process.

As we are a site dedicated to indie horror, maybe we can talk a bit about that scene. Where do you think the indie horror scene is at now and where do you see it going?

Indie horror is as vibrant as ever - if not more! Fans get really into it and really passionate about it. The filmmakers have a connection with their audience, a mutual understanding, like no other genre. My personal opinion is that indie horror will be the last remaining survivor after the apocalypse in 2012.

What’s next for you and ACEFEST?

Once thought of as a temporary gig, ACEFEST has become one of the most anticipated events on the industry calendar. We're not going anywhere, anytime soon.

There are 3 easy ways to submit your film including Withoutabox, online form and PDF mail-in. More information can be found here.
Posted by Dead Harvey at 9:50 AM