Interview with Frank Ippolito, writer/director of "& Teller" and "& Teller 2" 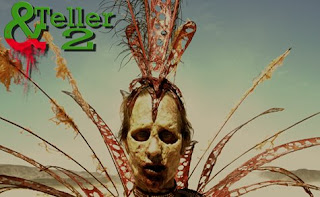 And a happy Cinco de Mayo to you, Mes Amigos!

For you history buffs, Cinco de Mayo (Spanish for "fifth of May"), is actually a regional holiday in Mexico, primarily celebrated in the state of Puebla and it commemorates the Mexican army's unlikely defeat of French forces at the Battle of Puebla on May 5th, 1862, under the leadership of Mexican General Ignacio Zaragoza Seguin. In the U.S., Cinco de Mayo has been adopted as a celebration of Mexican heritage and pride. I, personally, have incorporated it into my life because I love margaritas, tequila and Mexican beer... plus, I always celebrate May, as it's the beginning of a new fiscal year for me.... which means I managed to get through another year, pay all my taxes and I'm ready to start all over again. In any case, happy Cinco de Mayo! Go get yourself a Pacifico and celebrate the fact that I paid my taxes!

Anyhow, that's not what this post is about... this post is about innovation. They say that necessity is the mother of invention and invention, really, is to innovate. To innovate - the creation of a new configuration, composition of matter, device or process. Inventions can be based on simply innovating pre-existing models OR they could be much, much more. Innovation can lead to radical breakthroughs that extends the boundaries of human knowledge or experience. They can literally change the way that we, as humans, see and interact with the world. Think about computers, space travel and nano technology. In all that, however, they didn't factor in laziness. Laziness can also be the catalyst for innovation. Think about the remote control, automatic transmissions or frozen pre-made dinners. Something tells me that necessity was not at the root of those inventions... and something tells me that pushing the bounds of technology is NOT why Frank Ippolito did his Dead Harvey interview via his webcam... but it's genius, it's innovative and, now, I crave more webcam interviews. Happy Cinco de Mayo to YOU, Mr. Ippolito!

Frank Ippolito is both a top notch special effects guy, plus an award winning filmmaker. He got his start in the make-up department and has worked on big budget films, such as "Pirates of the Caribbean: Dead Man's Chest", but also did effects for a lot of low-budget films, as well as shorts. For example, he worked on "Cheerbleeders" and "Gay Zombie", two short horror films that we've covered. He also went on to write and direct "The Growth", "& Teller" and "& Teller 2". The "& Teller" films are brilliant shorts starring one half of the comedy duo, "Penn & Teller" and are getting lots of buzz... Now, there's a lot you can take away from this interview and, through the power of innovation, you can rest your brain and your eyeballs... don't try to think, just sit back, relax... and press play.