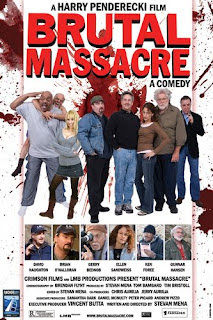 A quick week in horror, this week... as usual, you can click on the titles to buy them off Amazon and you can watch all the trailers on our Youtube page.

" is actually, in fact, a comdey, but it needs to be mentioned for obvious reasons. It's written and directed by Stevan Mena, whose only other film to date is Malevolence, and it's being released by Anchor Bay. It's a mocumentary about a washed up horror auteur who's putting everything on the line to get his one last film finished. It won the festival prize at the Long Island International Film Expo and, for a horror fan, it's got an unreal cast, including: David Naughton from "An American Werewolf in London", Ken Foree from "Dawn of the Dead", Ellen Sandweiss from "Evil Dead" and Gunnar Hansen, the original Leatherface from "Texas Chainsaw Massacre"... and they're all in comedic roles.

" comes from writer/director Cartney Wearn and this is his feature directorial debut, although he has been in the business for a while. He started out writing documentaries (I didn't know they required writers?), as well as freelance writing for magazines and newspapers before he got into screenwriting. During his screenwriting time, he began shooting short films and theater productions... and then came "Pray for Morning", which won the Columbine Award for Film Score at the Moondance International Film Festival. It's about five students who break into an abandoned, haunted hotel.

" comes from writer/producer/director David O'Malley... but he's going by one of his alternate names, Phillip Leftfield on this one... and I'm not sure why he'd go by an alternate name when everyone knows it's him, but... whatever. So, there's a lot of recognizable names here and the reviews have been fairly good. You've got Lindy Booth and Nick Cormish, with supporting roles from Roy Scheider (one of his last roles), Tia Carrere, Daryl Hannah and Eric Roberts. It's about a guy who gets married to a seductive woman after a short, but intense relationship. During their honeymoon, he uncovers the terrible truth about his new wife...

", which was originally called "Mojave", was written and directed by David Kebo and Rudi Liden. It's about four friends that head into the desert for some fun, but the trip turns to hell when they meet up with a couple of bad locals. It was actually made back in 2004 and screened at the L.A. Film Festival back then to great reviews... so, I'm not sure why it took so long to get released. In any case, it looks really good.

" has really cool cover art, sounds good and even has a cool plot - "Abducted couples are victims of medical experiments that mutate their minds with supernatural abilities. As their mental capacities increase, so does the danger from something evil that is not of flesh and blood." However, I couldn't help but notice that it was getting terrible reviews... so, I read through a bunch to find out what was going on. It turns out that the film is a "Christian film" with heavy handed Christian views... now, that's not to say it's bad, that's just to say that a lot of people rented it, bought it or saw it, and were surprised by that. Take that for what it's worth...

Like I've said many times before, I usually don't cover old films, but I'll briefly mention that 1977's "The Campus Corpse

" is being rereleased, just because I love the idea behind it. It's about a fraternity hazing where a few guys are confronted with the death of a brother and they must maintain the illusion that he's still alive by hiding the body and taking it on a trip to make it look like a skiing accident. It's like the prequel to "Weekend At Bernie's". I love it...

is coming out, this is the season with: "The Damned Thing", "The V Word", "Pelts", "The Black Cat" among others... definitely not as good as the first season, but there's some good stuff here.
Posted by Dead Harvey at 10:30 PM