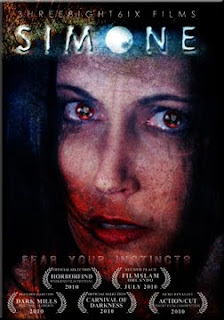 Yeah, the film has a full-on girl-on-girl sex scene and it has some great violence, but, really, that's not what got me. Come on, I have a film degree. It takes more than that. The truth is, the film is extremely well put together and crafted so well... and in a way that would make a lot of other filmmakers stumble. It's one of those films where, when you get to the end, you realize that the story is far richer than you originally anticipated. The film grips you at the beginning, then holds you as the plot and characters are slowly revealed over the course of the film. Really, for a short micro-budget horror, you can't ask for much more. However, you can ask to talk with the filmmaker... and that's what we did.

So, Joops, tell us about “Simone”, what’s it all about?

Simone is really a tragic love story. A girl who just wants to be loved, but with a certain affliction she harbors, finds it hard to make a true connection with people. The story picks up on the rare night she does go out on the town and finds someone she begins a relationship with. It’s very much a normal tale of hiding personal demons from others, whether it is drug addiction, life history or a disease. Life’s little struggles. And through the haze of the next morning she slowly puts the pieces of her horrific night together.

Simone was self-financed by 386 Films, which is, Producer, Michael Long and myself, along with Executive producer Nicole Long. We also had some great people that donated locations and their skills. The budget on whole was $1275 which included renting dollies and jibs from Mike’s other business Glideshot Industries. Most of the funds went to feed a cast and crew of 14. We do most of the pre and post work ourselves, including the FX make up and physical effects. We have a great, dedicated core crew who bleed for us and we make the most of all available resources. In the end we probably spent about $65 on actual production.

I really like how you slowly revealed the storyline through flashbacks and how you open with the main character seemingly being a victim, then things start to turn around. Talk about how you developed the script and the story.

The original script, titled ‘Hair of the Dog’ was penned by Frazer Lee. It was a great story of which most remained through to the screen version. His story dealt more with the fogginess of the hangover until the realization of the night’s events. When developing the idea we read more into the story and began to see it as a tragic love story. We did see Simone as a victim. So we had Jennifer Ward (Simone) play up those emotions that could be interpreted in various ways. On a second viewing you’ll see how Simone portrays being afraid, but it’s not actually from being in danger, she is terrified of what she has done. There is very subtle differences in telltale signs. It was a very fun premise to explore, and I think Jenn and Erin Cline (Eve) did a fantastic job in bringing that out.

Obviously you went for having lots of nudity, as you had a full-on lesbian sex scene. Talk about the decision to show all that, as you easily could’ve just implied most of it. Was it for the audience or was it for the story?

Ahh, the biggest controversy of the film. Naked lesbians! First, having Simone as a lesbian was as written in the original screenplay. It was a natural fit for the character in our back story development. Also, having a horror story with two women is not a very common approach. Of course, we could have implied both the nudity and the sex, but why shy away from it? Gore is accepted but sex is not? It was essential to the story of the character freeing herself from her normal constraints. The scene is the crux to the underlying story of agony and ecstasy. It’s inter-cut between the two. It would have been cheating to not fully convey that. I think we handled it appropriately. I don’t think it’s gratuitous in any way. Again, Jenn and Erin were incredibly brave and we had a great trusting relationship.

As for the gore and the effects, most of that was implied… except for the aftermath. Was this due to budget restraints or was it an artistic choice?

It was mostly an artistic choice given the budget. The violence part was not essential in the way we were telling the story. There is enough information on screen to know what was happening. Screams. Blood splatter. The aftermath is much more disturbing in how something so beautiful was destroyed. Would we have gone further with the visuals with a budget that allowed for it? Probably. We did shoot more revealing footage for the violence, but in the editing process it didn’t feel right. We did not want something cheesy, just to throw in, when you need to compete with million dollar effects. Any investors out there?

Mike is a huge horror fan. From the micro-budget to the main stream. He has a crazy DVD collection. We wanted to make a cool little horror film. Our previous projects have been gritty, dark and grim dramas so it wasn’t a stretch. There is a great market for horror and the fans really accept the work if you are honest about it. I won’t say it’s easier to pull off horror on a micro-budget but the genre lends itself to creativity. Plus it’s fun as hell!

Talk about your goals behind making “Simone”. Is it for accolades, for a reel, for festivals?

All three. The reviews, so far, have been awesome. Simone has been well received on the festival circuit. It opened the Horrorfind Weekend Film Festival, was featured at the Dark Mills Festival in London and was a semi-finalist in the Action/Cut Film Competition, among others and more to come. We are using this as just another stepping stone towards bigger projects. Hopefully the right someone sees what we are doing and is inclined to work with us on a great project. We just do what we do, if people respond positively to it, then even better!

Technology has made it so that anyone can point a camera, edit on their iPhone and think they made a movie. Most of what is posted is not horror, it’s horrible. On the same front it allows some truly creative people to bypass the normal channels and get some great projects out to an audience. It still takes quality writing and storytelling to make a good film. There is a craft to it. If Hollywood ever pulls their head out of their re-make loving ass, they’ll realize there is a lot of great work being produced. If indie filmmakers can make amazing work using their resources, scraping together miniscule funds and working with quality actors no one has heard of, imagine what they can do with a little support behind a project.

Where can people check the film out?

Simone is available on DVD. The DVD has the original film plus over 85 minutes of bonus features. Simone will be playing to 1.5 Million viewers on KAZV-TV Modesto, CA (Oct 11 & 26) and on Oct 28th we head out to Hollywood for the Carnival of Darkness festival. Check our website (386films.com) for updates on other festivals and to get the DVD.

We are always developing new projects. A feature script is in the works. We have a few new projects slated this year and into next. It’s all about working with great, talented people and upping our game each time to make the best possible film, no matter the budget. We just love the process. We love making movies.
Posted by Dead Harvey at 8:00 AM

awesome interview! I never seen something like this this before, good job!

It's been said that every bettor needs to look at this,