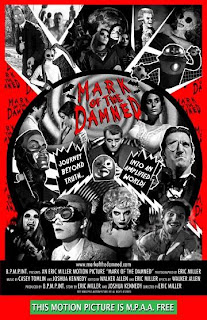 I'll warn you, there's lots of rereleases, double packs and special editions this week and only a few of them are notable, but I'm diligent. I'll go through them. First up, there are rereleases of a few so-called classics, including: "Coma

" and "What Ever Happened to Baby Jane

" and, really, let's be honest. None of them are true classics... maybe "What Ever Happened to Baby Jane", 1962's tale of harsh sibling rivalry starring Bette Davis. However, it's dated and it would be tough to sit through. Instead of picking one of those up, you should get the modern classic, "Tremors

", may I recommend the "Puppet Master" collection, the Charles Band classics? Then, there's the double packs: "Gingerdead Man / Gingerdead Man 2: Passion of the Crust

". Spanish films anyone? Check out "Amar a Morir

". You can click on any of those titles to read more about them on their Amazon page, but I'm not going to bother getting in to more detail. I'll go in to a bit more depth on the new releases, which include: "Mark of the Damned" - the double disc danger pack, "The Brazen Bull" and "Dead Enders". You can go to our Youtube Page to check out the trailers.

"Mark of the Damned

" actually came out in 2006 and was originally shown on Cinema Insomnia's 2009 Halloween special. It's directed by Eric Miller and it looks like it was produced by his friends and family. It looks outstanding and it's shot entirely in black and white as an homage to the classic El Santo films. If you're interested, El Santo was a Mexican wrestler in the '40's and '50's that crossed over in to film and basically played the same part, over and over again... a superhero fighting supernatural creatures, evil scientists, criminals, secret agents, aliens... whatever. I'm very interested in checking this out...

The cover art for "The Brazen Bull

" may make it look like it's from the 70's, but it's not... it's from 2010 and it stars Michael Madsen, Jennifer Tisdale and Rachel Hunter and it also looks pretty f'ing good. The trailer is loaded with gore. It's definitely low-budget by Hollywood standards, coming in with a budget of approximately $1Million, but it looks great. The film is set in "the bowels of an iconic derelict LA high-rise" and it's about a madman, played by Madsen, who "brings a heaping helping of sanity and jet-black humor to the crazy table."

Unfortunately, I can't find out too much about "Dead Enders

", although it looks like it could be a great micro-budget film. It's written and directed by Paul C. Hemmes and Megadeth's David Ellefson contributed to the soundtrack... the budget's low, probably around $10K, and it's about a disturbed woman that kidnaps and brutalizes those she believes to be the living successor of her long dead "one true love".
Posted by Dead Harvey at 8:35 AM