The Weekend at the Box Office, Genre Films Stink it Up 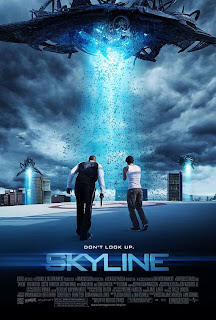 So, the genre film, "Skyline", didn't exactly light anything on fire. "Megamind", the 3D animated film from Dreamworks stayed in the number one spot and the new Denzel Washington, 'train-out-of-control' film, "Unstoppable", came in second. "Due Date" slipped to third and the afore mentioned sci-fi film, "Skyline", came in fourth... grossing a meagre $11Million. As "Skyline" is really the only thing of interest to me, I'll take a closer look at it.

First, let's look at the positive... which isn't much. The biggest positive is the fact that it only had a budget of $10Million. So, it grossed over its budget on the first weekend. That means that, in the end, it should be a money maker. Between international gross, a few more lingering weeks at the box office, an early DVD release and so on and so on, it'll make some cake. What's remarkable to me is that an effects driven film like this cost only $10Million. That means one of two things... either the cost of doing the effects have come way down or there just isn't a lot of effects in the film. Like, ten years ago, a shot of a spaceship sucking up thousands of people would be enough to bring hoards of people to the theater. Now, not so much...

Okay, so let's look at the negative... why did it do so poorly? Well, there's a lot of things to hang your hat on here. No big stars, a flat and generic plot, it's PG-13, poorly written... I mean, really, how could they have expected it to do anything? When you think about it, why was the film even made? If you're not going to get a big star and if you're not going to push the envelope on at least one front, what do you expect? Really, it sort of annoys me when resources are blown on bad projects. Compare this to "District 9". "District 9" had no big stars, but the film was written brilliantly. Not only that, it pushed the envelope on alien films, turning things on their head. If you're going to get in this arena, you should be ready to play - be daring, push it. It's a shame that "Skyline" didn't. There's plenty of fledgling indie screenwriters and filmmakers that could've tweaked the story enough to make it work. I'm sure of that.

Anyhow, genre films are notably absent from big screens for the next little while. "Harry Potter and the Deathly Hallows Part 1" comes out on Friday, as well as "The Next Three Days". Both should gobble up plenty of dough. If you can find it, a little sci-fi/horror film from the UK called "Heartless" is getting a very limited release... VERY limited. I think it's out on about 5 theaters. If you're lucking enough to live in a city that's getting it, you should go check it out. Otherwise, this week looks to have a couple of interesting indie's coming out on DVD, so check back in tomorrow!
Posted by Dead Harvey at 8:32 AM