Interview with Jason Horton, writer/director of "Monsters in the Woods" 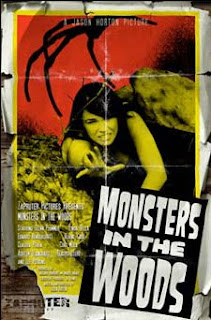 We've now spoken with Jason Horton three times. Once for his awesome horror anthology, "Edges of Darkness", once for "Trap" and, now, for his upcoming film, "Monsters in the Woods". So, what can I say about Horton, aside from the fact that I've been overly impressed with everything of his that I've had the pleasure of watching? The guy knows how to make a little budget look like a lot of budget, he's extremely diverse and he knows how to tell a story. Long and short, he's one talented and dynamic independent filmmaker. Having said that, he's still going through a lot of the trials and tribulations that we all go through. Namely, how do you get paid to do this? All said, I'm very excited to check out his new flick, "Monsters in the Woods", and I hope it brings him piles of success, as it looks to be the best piece of work that he's done... which says a lot. We're very happy to have had the chance to discuss the film with him here and, as usual, he gives a great interview that every indie filmmaker should read.

This is your third film and this is the third time that we’ve talked with you. So, tell us about your latest film, “Monsters in the Woods”. What’s it all about?

Monsters will be my fourth movie, we'll get into that in the next question. It's about a micro-budget movie crew that treks into the wilderness to shoot horror scenes in order to convert their unsellable indie-drama into a horror flick. They soon find themselves besieged by real monsters.

Where did you get the idea for “Monsters in the Woods”?

Monsters in the Woods was born out of much personal and professional turmoil. Personally, I was going through an extremely hard break-up. A lot of that personal strife ended up in the movie in different ways. Then professionally, I had just finished Trap. Which was my best piece of work up to that point. Of course it was also my hardest to sell. Distributor after distributor said "I love it. It's great, but we just can't sell it." It was and indie DRAMA, with no name actors, gratuitous violence or nudity. One distributor talked to me about the project for over an hour. He loved the movie, but of course couldn't sell it. He suggested I cut horror scenes into it and turn it into a creature feature. I was desperate and considered it for a quick second, then came to my senses. However, the idea was so ridiculous, I thought it would make a movie. That was the genesis of Monsters in the Woods.

That was one of my major reasons for doing the movie. I didn't want to make another stale "found footage" movie and didn't want to make the kind of creature feature I was satirizing. So I decided to use the "found footage" in what I think it a fairly clever way. The movie, like most, is broken up into three acts. I start out in the "movie within a movie" then transition to the "found footage" stuff. It's all from the perspective of the Behind the Scenes camera. It remains found footage throughout the 1st act and then transitions to "real" footage for the 2nd and 3rd acts. The acts also come together in a pretty cool way, structurally speaking. Another main inspiration was the fact that I was shooting a horror movie in complete daylight. There are no night scenes. This is basically due to budget. We couldn't afford the lights to light a night shoot in the woods proper. So I needed a good, creative way to give the movie some visual levels, so that it didn't get stale (a common problem with indies.)

What stage are you at with the project right now and talk a bit about how you got to this stage.

I'm in post production. I've finished a few sales trailers and am starting the actual cut this week.

This has been the hardest production I've ever been a part of. There was On set and behind the scenes drama, money issues, set backs, reshoots, revolving cast, script changes during production. Definitely the roughest time I've had making a movie, but the end result is the best work I've done. I can't wait to see how it all turns out.

What are your goals for “Monsters in the Woods”? What is the new benchmark for success for you?

I need for it to make some real money. I've sold all my other features, except Trap and made some money. However, I'm still scraping by, paycheck to paycheck, with my day job. I'm well over 30 now. The grind of making movies while still working another job is starting to take it's toll. I'm not sure how many more micros I have left in me.

Where can people find out more about “Monsters in the Woods” and is there a trailer that people can check out?

I also update my blog with Monsters stuff and moviemaking antidotes almost daily, you can find that here.

and finally monstersinthewoods.com should be up before the end of the following week (Ted's note - it's up now).

Now, let’s go back a bit. Last time we spoke, you were working on “Trap”, your second film. What’s happened since then?

My Executive Producer on Monsters in the Woods asked me to pull Trap from it's languid self-distribution in order to sell it on the coat tails of Monsters in the Woods. It is after all the inspiration for Monsters and is even mentioned as the movie they are converting into a horror flick.

You’ve come a long way since your first film, “Edges of Darkness”. In your opinion, where have you evolved most as a filmmaker since then.

Thanks. I think the cool thing about my work, is that there is growth that you can plainly see between every movie. Like them or not, you can't dispute that the work gets better.

We’ve gotta ask, as it’s been about a year since we last asked… where do you think the indie horror scene is at now and where do you see it going?

I really don't know. I think that there will always be a market for horror and it seems to be thriving now. I just don't know how we're going to make any money doing it.

As always, I have a bunch of scripts. I've gotten a few more pitch meetings lately with big and small companies, but no deal yet. My plan now is to see what happens with Monsters in the Woods and go from there.
Posted by Dead Harvey at 8:19 AM

This won't actually have effect, I suppose like this.

Guess what? This is exactly what big companies are paying me for. They need to know what their average customer needs and wants. So large companies pay millions of dollars each month to the average person. In return, the average person, like me and you, fills out surveys and gives them their opinion.