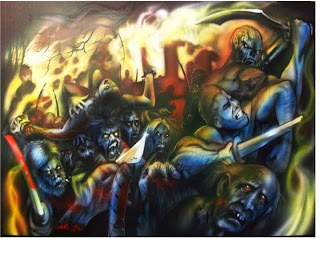 It's been a while since we spoke with Max Perrier, the producer, cinematographer and director of the indie film, "The Ante". We spoke with him in early 2009 and the film actually came out in 2006. It's a great indie film and if you want to read our interview with Perrier, you can click here and if you want to find out more about the film, you can click here to go to its page on IMDB.

Anyhow, not too long ago, I received an email from one of the writers of "The Ante", Danek S. Kaus. Kaus not only wrote that screenplay, but he's a represented writer that's been hired to adapt books into screenplays, he's had scripts optioned and he's been approached by various networks and magazines. Long and short, he's pretty good at this whole screenwriting thing. Now, that's usually enough to warrant us doing an interview, but in this case, there was something else that really piqued our interest. He's currently working on a project called "Swords of the Dead" and, quite frankly, we want to know more. We had the chance to discuss that project and more here... definitely worth the read, folks!

Tell us about the concept behind Swords of the Dead, what’s it all about and where did the idea come from?

I used to do some publicity work for several martial artists. Also studied a little off and on. Learned just enough to be dangerous – to myself.

A couple of years ago, maybe longer, I was brainstorming for screenplay ideas. I wanted something in a genre that already had a good following that was fun to write.

Martial arts and horror usually do well, so I thought about combining them. But then, I had to decide what kind of horror, what kind of monsters would the martial artists have to fight?

Vampires never seem to die and werewolves shed on the carpets, so I decided to use zombies. But zombies are often unarmed, sometimes literally because they tend to lose body parts, so I decided to give them weapons. And so Ninja Zombies were born, uh, un-deaded?

The story is about a guy named Mike Striker who is hired by a beautiful mystery woman to kill Ninja Zombies that have invaded her town. He puts together a crew of misfit martial artists to help him destroy the zombies.

It has good characters and dialogue, humor, romance, lots of marital arts action and, of course, Ninja Zombies. Sorry world, but somebody had to unleash them on you.

What’s your ultimate goal for Swords of the Dead?

My manager in LA, Blair Silver, thinks Swords of the Dead could become a franchise, like Friday the 13th, complete with action figures, graphic novels and trading cards, etc., so that is where I would like to see it go.

What stage are you at with the project now and talk a bit about how you got to this stage.

The script was finished last year. Showed it to an internationally-known martial artist who has done feature films and TV. He loved it. Don't think I should mention his name at this stage.

The graphic novel version of the screenplay is in progress. It's being serialized now on Facebook. People can find it here

I believe that you don't have to belong to Facebook in order to view the page.

Blair and I are shopping the script now.

Readers should know that you’re an accomplished screenwriter. So, tell us, what makes a good horror story?

I think many of the best horror stories touch our primal fears – the dark, things that go bump in the night, the fear of being eaten, childhood fears, creepy-crawly things, Death, with a capital D.

In zombie stories, the Dead are coming after the characters. The fact that the zombies are rotting themselves, reinforces the concept of Death chasing people.

In my own case, I still recall the terror I felt growing up with frequent zombie outbreaks in the neighborhood. Didn't help the property values either.

Psychological terror can be scarier than physical danger. A prime example of that is The Exorcist. In the original version of The Haunting we never see a ghost, but we experience their effects in other, terrifying, ways.

Also, the best horror stories have characters that we care about. We root for them to survive. Too many horror films are just about the body count. The characters are often one-dimensional.

AMC's The Walking Dead has great characters. We really do root for them. It's as much a drama as it is a horror story. Nice job.

The script is being made into a graphic novel. How did that come about and what’s your reasoning behind doing that?

That was Blair's idea. Through the years he had observed the growing trend to make movies from comic books and graphic novels.

I always loved horror films as a kid. I was responsible as a child, so when my parents would go out to dinner or something, they trusted me to be by myself. I would watch the schlocky horror flics on TV and then be too scared to go to sleep until they got home.

Max Perrier, asked me to do the original script for his award-winning indie film The Ante. I was finishing a book and didn't have time, so he hired another writer.

When the script was finished, Max was unhappy with it. By then, I was freed up. He asked me to do a re-write. I changed about 90% of the original script. It's a story about a man falsely accused of murder. For example, in the original, his wife was loving and supportive. I decided to create more conflict by turning her into a greedy harpy. That set the plot off in a new direction. I created a lot more plot twists and punched up the dialogue, also adding some humor from time to time.

"The Ante" got a great review in Variety and so far has shown in nine film festivals in North America and Europe.

I wrote several more of my own scripts, one of which a producer for Lifetime network was very interested in. But it was a period piece, which made it more expensive, and she was unable to get funding.

A couple of my other scripts have been optioned.

A few months ago, a production company hired me to adapt the true story book "Under the Overpass" for the big screen. It's about two college students who wanted to understand how to better help the homeless by becoming homeless themselves in several U.S. cities. For five months they slept on the streets, panhandled and ate from garbage cans. I've been told that Random house bought the original publisher of the book and is releasing a new edition this month.

The film is in development.

No. Took a couple workshops, read a several screenwriting books, watched a lot of movies.

I'm not an expert on the indie horror scene, but I think it is going to continue to get better, especially with production costs coming down because of digital cameras. Shooting with film and the cost of developing it was a big barrier to indies. In addition, the Internet has opened up more avenues for distribution, which has been a problem for indies.

And zombies continue to grow in popularity, which is good for me – and the zombies.

Where can we find out more about you, your projects and, most importantly, "Swords of the Dead"?

One important note about Swords of the Dead fan page. Anyone who becomes a fan has the chance to become a Ninja Zombie in the graphic novel. We're going to pick one person at random for that honor.

My website is called Turn Your Book into a Movie

My email, in case you want to hire me, is dkaus@sbcglobal.net

I was recently hired by two authors to adapt their books. One is a true story and the other is a novel.

I'm also working on some of my own scripts.
Posted by Dead Harvey at 8:13 AM

I suppose one and all should browse on it.