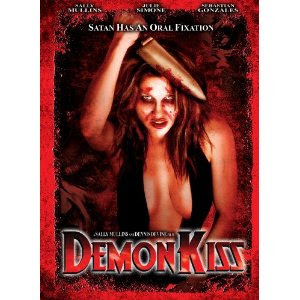 It's a slim week, but it's a decent week for horror on DVD this week. Almost everyone should be satisfied... unless you only like big budget flicks. Then, you're just probably on the wrong site. As usual, you can go to our Youtube Page to check out the trailers and you can click on the titles to be taken to the films Amazon Page, where you can read more and/or buy the film.

". What's weird is, the original film came out on MTV a year ago... then they released it on DVD a couple weeks ago. "My Super Psycho Sweet 16: Part 2" just came out on MTV a couple weeks ago and now it's available on DVD. Strange... in any case, it's from MTV, it's sure to become a franchise, and it's not going to be for every horror fan, that's for sure. However, they got great ratings on MTV and they were extremely successful at reaching that much-loved teen demographic, so you may learn something from watching.

" did quite well on the festival circuit and there's some cool stories behind how it got made. Most interestingly, the writer/director Roze and the Executive Producer, Robert Guthrie, had raised around $100K for another project, but needed more... so, they revamped the idea and tailored it to that budget and came up with this film. The film is about a group that goes into the Kaibab National Forest for a 3 week survival trip and peyote vision quest... but end up battling the elements and each other. Check out the trailer, great production value for that budget. Wow.

I'm almost positive that this is the same "The Riverman

" film that aired on A&E Network forever ago... Cary Elwes played Ted Bundy in that, right? Either way, I'll mention it because I remember watching it and thinking it was pretty good.

" had a budget of around $30K and it was directed by and stars Sally Mullins, co-directed by Dennis Devine. It also stars Julie Simone and Sebastian Gonzales. I like the plot, too... in an attempt to summon a demon by using the sacrifice of a prostitute, the evil entity possesses the body of the prostitute. I love how low-budget horror manages to always tie sex and violence together, don't you?
Posted by Dead Harvey at 8:28 AM

I suppose everyone must browse on this.