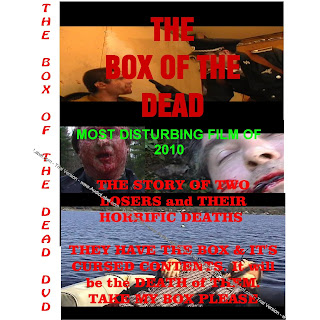 Okay, finally... let's get to the new horror that came out on DVD this week. It may not seem like a good week because there's only 9 releases, but there is some good shit coming out. I'll quickly mention the rereleases, as there's only 3 of them... there's the Criterion edition of the classic "The Night of the Hunter

" comes out on Blu-ray, as does "Children of the Corn

". All are classics... just not sure I'd pay $70 to see season 2 of "The Twilight Zone" on Blu-ray. Anyhow, let's get to the new releases. As usual, you can click on their titles to be taken to their Amazon page, where you can read more and/or buy them, plus you can go to our Youtube Page and watch all the trailers.

Let's start with "Don't Look Back

", which is your typical non-new wave French horror. Meaning, it's overly dramatic and brooding. Don't expect "Martyrs" or "Inside" with this one. It's from Marina de Van and it's about an author that seems to descend into madness, questioning everything. Think Lynch or Cronenberg with more moody music, slow moving scenes and French people.

I couldn't find the trailer for "A Lure: Teen Fight Club

", but I really wish I could have. This is the craziest mash-up of pop horror films that I've ever heard of. An undercover female detective enters high school, where she tries to blend in, because she's looking in to why a group of high school co-eds have gone missing. It turns out that they've all be lured and imprisoned in a horrifying hideout... where, obviously, they're being forced to fight each other to the death. There's a bit of "Fight Club" in there, some "21 Jumpstreet", a bit of "Hostel", a touch of "My Sweet Psycho 16"... I love it.

Horror legends Sig Haig and Michael Berryman star, or, should I say, are featured, in "Haunted Casino

", which also has something to do with Charles Band. Amazon says it's from Wizard Entertainment, but I think the trailer said it was from Full Moon... which would explain the Charles Band connection. Anyhow, the film has Charles Band all over it, with creepy muppets and goofy, gore-filled characters.

", too... which looks to be good-old micro-cinema at its best. Writer/director William E Cheney is quite bold, as he calls it "the most disturbing film of 2010"... and he may be right, I haven't seen it. I do like the tag line, though - "The story of two losers and their horrific deaths". Alright, I'll bite. I want to know more...

" is another low-budget film that looks awesome. Writer, director and producer Joe Francis actually shot it live during the Texas Frightmare weekend. It's about Max, who goes to a horror convention with his step sister and her jerk boyfriend, who end up colliding with a couple of security guards... dirty jokes, sex and violence ensue. The trailer has piles of sex, so I can only imagine what the feature is like.

Last up is "Exhibit A

", which uses everyones favorite shooting style - first person found footage. The film is out of the UK and it was actually quite successful, from what I understand. It's always good to check these out, as first person shooting is so much easier and cost effective that setting up cameras traditionally. You know what they say, watch how people use the style successfully... and then copy it.
Posted by Dead Harvey at 8:00 AM

Quite useful piece of writing, thanks for this post.