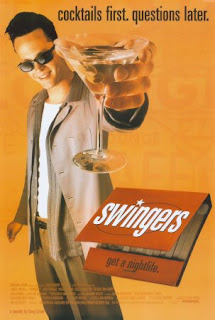 The sun is shining, it's Friday morning and I'm already thinking about happy hour. What to drink tonight (this afternoon)? Mojito? Margarita or two, for sure... Anyhow, if you haven't heard, as far as Hollywood's concerned, Summer starts tonight. Maybe that's why I'm celebrating. "Iron Man 2", the first tent-pole film of the season, opens tonight and it will, unfortunately, absolutely decimate "A Nightmare On Elm Street". It's funny how there are NO other movies opening today, the next biggest release is a documentary from Focus Features called "Babies" and it's on 534 screens. Paltry compared to the 4,380 screens that "IM2" comes out on. That, by the way, is the widest release in history. As for horror, next up is "George A. Romero's Survival of the Dead" on May 28th, which probably won't get that wide of release, and a film that I'm really pumped for, "Splice", which finally hits screens on June 4th. Not much after that... anyhow, I had a lot of interesting stuff come across my inbox this week and I thought I'd share.

First up is a great article from the Raindance Institute called Writing For No Budget Films, by James Burbidge. A lot of what he covers goes without saying, but it's pretty interesting to see it laid out this way. I mean, if you've ever written a script for a film you shot yourself, you'll know this stuff... and you probably learned it the hard way, like most of us did. However, if this is your first crack at writing something that you plan on producing yourself, definitely read this article.

Next, WithoutaBox.com did a spotlight on the 8th Annual SCRIPT P.I.M.P. Screenwriting Competition, where they "search for the best stories by undiscovered writers worldwide". Not only is the competition well organized, they offer some great prizes and they leverage their powerful network of industry professionals to help emerging screenwriters launch successful careers. Even if you don't enter the competition, you should check out their site. They offer some great services to emerging screenwriters and can really get your script out there. We, at Dead Harvey, have used them before and can't complain. Personally, I don't like the name, but PIMP does stand for "pipeline into motion pictures". They could've thought a little harder on that, but whatever...

Remember the interview we did with Mike Schneider about the film "Night of the Living Dead: Reanimated"? Well, I just linked to it there if don't. They sent out a press release and are doing something VERY cool. Their distributor, Wild Eye Releasing, will be "distributing low-end, cheaply packaged versions of Night of the Living Dead: Reanimated to—well, to anyone who wants one." Here's the highlights of the press release: Due to the unpredictable nature of bootlegging, it’s difficult to say with precision where this DVD will surface, but checking sidewalk blankets in big cities and overloaded freebie tables at genre conventions is probably a good place to start. Once fans have their own copy, Wild Eye is encouraging them to upload it to their favorite file-sharing and Torrent sites. And this give-the-people-free-content approach is in perfect keeping with the not-for-profit Creative Commons ethos that launched the NOTLD:R project in the first place. Having said that, if you want to pre-order the authentic version, loaded with extras, click here

Lastly, you may remember an interview we did with Belinda Greensmith about a film she was in production on called, "For One Night Only". Well, we are proud to present to you, the official trailer for the film. Enjoy! Have a great weekend everyone!