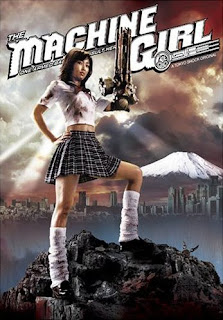 Okay, seriously, I'm just going to whip right through the news from the box office because it's all of little or no consequence to anything that I give a rats ass about. "Shrek Forever After" won the weekend, but it was the least attended opening for a "Shrek" film... this being the fourth, if you lost count. I have a feeling that "Shrek" will live on, though... in some sort of incarnation. A kids show, video games, straight to DVD releases. Whatever. It's a good franchise. The other new nationwide release was an unmitigated disaster. "MacGruber". Wow. I mean, it took in around $4Million total. With "Prince of Persia: The Sands of Time" and "Sex and the City 2" coming out this week, it's done. "George Romero's Survival of the Dead" will probably do better and it gets a limited releases this Friday... so limited that I don't get it here, which sucks. Anyhow, let's look at the week in DVD horror. As usual, you can check out our Youtube Page for the trailers and click on the titles to go to their Amazon page, where you can read more and/or buy them.

I watched the first half of the first season of "True Blood", then it got away from me. Now, they're releasing "True Blood: The Complete Second Season

" on DVD. Where does the time go? Are any of you big "True Blood" fans? If so, is this worth getting caught up on, really? The show has received great critical acclaim and even won a few awards, including a Golden Globe. However, I want to hear from the people that watch it.

They're rereleasing a special edition version of Lucio Fulci's "City of the Living Dead", otherwise known as "The Gates of Hell", on regular DVD

. Is it a classic? I think so. It was the first installment in Fulci's unofficial "Gates of Hell" trilogy, which also included "The Beyond" and "The House by the Cemetary".

The awesome indie horror, "The Landlord

", comes out this week... officially. We actually spoke with the writer/director, Emil Hyde, a while back. Here's a link to the interview that we did with him. It's definitely worth a read and the film is definitely worth checking out.

Okay, I've mentioned this film numerous times and I highly, highly recommend it. If you've never been in to Japanese splatter films or you love them, but haven't seen "Machine Girl", here's your chance to go all in. This week, you can get the "Ultimate Machine Girl: Collectors Tin

This looks like a bit of a hidden gem and I'll be on this one quick. Check out the trailer for "Babysitter Wanted

" on our Youtube Page, it looks unreal. It had a very limited theatrical release in 2009, but won a ton of awards on the indie horror festival circuit.

The writer/director of "Someone's Knocking at the Door

" is Chad Ferrin and he broke into the industry as a production assistant on "Halloween: The Curse of Michael Myers" and "Hellraiser: Bloodline". He moved on to directing episodes of "Troma's Edge TV" and then started making films for Troma... with low-no budgets. "The Ghouls" was shot on Mini DV for $15K and "Unspeakable" was shot for $20K. This is his latest and, quite frankly, it looks pretty f'ing good. If you're going to go low-no budget, you might as well do something f'ed up. This fits the bill and I can't wait to check it out.

" looks really creepy, but mainly because I find twins creepy to start with. The film is about a twin that dies and the brother and family that grieve after his death. The surviving brother acts as a medium and they discover that the two of them want the same thing, their parents love. However, the dead one doesn't want to return to the living, he wants them all to join him in the afterlife.
Posted by Dead Harvey at 9:45 AM