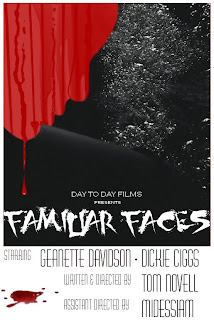 A while ago, I put a call out asking people to send links to their short horror films and I promised to review them and discuss them on the site. I get to watch some horror and you get a bit of exposure. Win/win, right? At this point, a few of you have taken me up on the offer, which is great. I still have some to get to and I'll get to them, I promise. Anyhow, today, we're going to look at Tom Novell's "Familiar Faces" and as he's posted it on Vimeo, I'll embed the film in the post, right before the interview.

Before I get to that, though, I'd like to just say a word or two about short form films. I graduated film school around a decade ago and all we made were short films. Some for class, some for fun, but all because that's what you made in film school. I mean, there were a couple of ambitious guys that made features, but I was WAY too busy at the bars to dedicate that much time to one single project... besides, it did none of those guys any good. Trying to push the completion of a feature on short time and little money isn't easy and it's going to show in the final product. However, with short films, short time and little money not only works, it forces you to make a clean, crisp film. The only problem for us was, we screened our short films for the faculty, students and our friends and ... that was it. Aside from a few film festivals, none of which liked the horror films we made, there was no market or place for short films. What a difference ten years makes. Not only are there lots of places to send short horror films, there's tons of festivals that specialize in short horror and you've got this thing called the world wide web that never says no to anything and has a pretty big audience. Youtube, Vimeo, Brightcove, FunnyOrDie, whatever... Also, and this is the big thing, I don't think it's reached a tipping point yet. I think the day of the short film is still on its way. So, keep 'em coming and I'll keep talking about them and putting them out there.

Familiar Faces from thomas... on Vimeo.

Tell us about your short film, “Familiar Faces”

Familiar Faces is a short film about a homeless girl who is poor and desperate. It was shot entirely in and around Detroit Michigan in 2009. We spent 4 weeks in preproduction working on shot lists, storyboards, prop lists, locations, script revisions, wardrobe and hair/makeup. Shooting took about 3 days and post production took 6 weeks.

If you don’t mind us asking, what was the budget and how did you secure the financing?

The budget was really low (under $200). The hotel room cost $150 and makeup/set design each cost about $20. I financed the project out of my own pocket.

What struck me most about the film was the camerawork, great use of focus and framing. What camera did you use and tell us a bit about how you created the look and feel.

The entire project was shot on the Canon GL2, a standard definition mini DV camera. The assistant director, Midessiam, already owned the camera and supplied it for the shoot. I operated the camera for the entire shoot with the exception of two or three shots. Most of the camera work was shot hand held. The focus/depth of field look was added in post production using a blur tool in After Effects. The overall coloring that you see was added in After Effects as well.

It was an interesting choice to cut the dialogue until a certain point. Talk about your decision to do that.

I knew I was doing all of my audio in post production and planned to do ADR for all of the dialogue. I had Dickie Ciggs come in first for an ADR session after the project was completely cut but I had gotten so used to watching it without dialogue that it didn't seem natural once I added it. I felt that the ADR dialogue took away from the dreamy feel of things. Instead, I choose use dialogue for effect only.

The music was another key element for me, it worked very well. Talk about the process of scoring the film.

All of the music is royalty free stuff found on Archive.org. I knew what I wanted things to sound like and listened to a bunch of different music until I found something that seemed right to me. I spent an enormous amount of time working on the timing and placement of both music and foley. I really enjoy working with sound design and believe that audio is what determines if a movie is watchable or not.

I am 27 years old and live in Detroit Michigan. My interest in horror movies started when I was young. My older brother and I would rent the "Faces of Death" movies and watch them after my mom went to sleep. I think I was about 10 or 11 years old. This exposed me to the brutality of the human race at a very young age. My stories tend to revolve around this extreme side of people. I fell in love with low budget horror flicks for their guaranteed boobs and violence. Although Familiar Faces doesn't have any nudity, my future projects will.

Not really. I have taken some one semester courses here and there but not any formal "Film School" training. I am a full time student though, constantly reading and watching movies. Always studying.

Talk about your goals behind making “Familiar Faces” and did you accomplish them?

I kept telling myself that this project would get made. Even if I had to shoot the whole thing in my backyard using my dog and my girlfriend. I wouldn't let anything get in the way of my finishing it. One of the biggest lessons I've learned in film making is that you have to be willing to compromise. Things change constantly and problems are always coming up. With low budget film making, you can't me married to anything in your script. If one of your actors quits on you halfway through, kill them off in the next scene or have a stand-in and never show their face again. Finish the projects that you start, NO MATTER WHAT.

I had my lead actress quit on me two hours into the first day of shooting. Both hotel rooms were rented with all of the cast and crew set up and ready to go. The lead calls and says that she can't do the project anymore. I had to make a choice and make one quick. We started asking around on set if anyone wanted the role and the hair/makeup girl Geanette Davidson said "sure". I was willing to get into drag and play the part myself if I had too. I was going to make this project that day, period. Geanette ended up nailing the part and did a much better job than the first girl ever could have.

My goal was to make "Familiar Faces" and that's what I did.

The indie horror scene is very much alive. I see it as the biggest its ever been and steadily getting bigger. With the rise of the internet and digital technology, a flood of film makers have emerged. Film making has never been cheaper or more easily distributed.

Where can people check out “Familiar Faces”?

All kinds of fun stuff! This summer, I am writing a feature length horror movie with a micro budget in mind (~$10,000) that I intend to shoot over the summer of 2011. Also, Oliver Thompson, John Drabecki and I are finishing shooting a series of shorts that will be interwoven into a feature length movie do out in the Fall of 2010. My goal is to stay busy and persistent.
Posted by Dead Harvey at 9:18 AM