From My Inbox To Yours: Another Potpourri of Indie Horror News 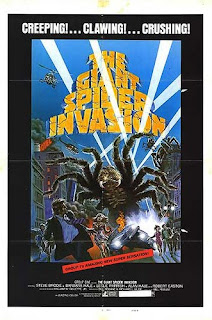 Ahhh.... another Friday and, I've gotta say, it's been a great week. In fact, I think I may be finished up early today, too. That means one of two things, I'll either watch a couple of indie horror films this afternoon OR I'll find a patio to sit on and have a few beers. Toss up right now, as the weather IS great, but... I haven't been able to watch a movie since last weekend and I can always drink at home with the window open. We'll see how it goes. Anyhow, once again, a few interesting things have come through my inbox and I'd like to share.

I realize that most of our readers are from North America, but we do have a few readers overseas. Either way, you should know about the 9th annual Fantastic Films Weekend that takes place in the UK. They screens some great films, both old and new. Check out the list of films that they'll be screening, a lot of them are available on DVD and you may have forgotten about them. I know I looked through the list and found a few that I had forgotten about. For example, their latest additions include: Paul Verhoeven's "Robocop", Bill Rebane's "The Giant Spider Invasion", Jan Svankmajer's "Faust" and Derek Ford's mondo witchcraft documentary "Secret Rites". They're also going to be screening some new blood, including "Zone of the Dead", "Plague Town", "Shadow" and their midnight screamer, the phenomenon that is "Birdemic: Shock and Terror", a $10,000 epic that's played to sold out audiences at festivals across the US. If you're in the U.K., check the festival out. If you're not, at least go check out the site and get some ideas for your next rental.

Have you heard about IndieGoGo.com? I hadn't... until I was forwarded a link because someone was looking for some funding. Now, just to be clear, I'm not typing this from the rear deck of my yacht, lighting cigars with $100 bills or anything. I'd LOVE to fund everyone's indie projects, but that's just not going to happen right now. However, I CAN pass on the link to you guys because that's what IndieGoGo is all about. Basically, they look to be a collaborative way to fund ideas and they're geared towards indie projects. I mean, they are called INDIEgogo, right? Anyhow, if funding is a big hurdle for you... and it probably is, check it out. I really like how one of the ways they help fund films is with pre-sales, that's ingenious.

I love this article from TheWrap.com, called "Cannes: The Asylum Makes Steady Profit on ... 'Titanic II'". I mean, I love it because there's a great message in there. You know what that message is? Sure, there are 'important' films out there, but people don't necessarily only want to see important films. There's a lot of people out there who want schlock. They want indie and micro-budget horror, they want "Titanic II". By the way, 'What if another ship took the same route as The Titanic and what if it ALSO hit an iceberg?' Awesome... and, not only that, they're making money on all their films! Can any Hollywood studio say that? The moral of the story? Every once in a while, it's important to realize how UNimportant we actually are.

Have a great weekend, talk to you next week!
Posted by Dead Harvey at 10:45 AM

If you'd like an alternative to casually approaching girls and trying to figure out the right thing to do...

If you'd prefer to have women hit on YOU, instead of spending your nights prowling around in crowded pubs and nightclubs...

Then I urge you to watch this short video to find out a weird secret that has the potential to get you your very own harem of hot women: