Interview with Andrea Ricca, writer/director of the CG film, "The Furfangs" 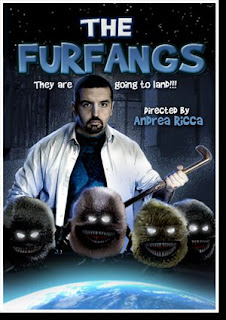 Good God, it was almost a year ago now that we spoke with Andrea Ricca, the filmmaker that brought us the CG effects laden short, "The Guardian". Here's a LINK to the post, if you'd like to get up to speed. Otherwise, I'll summarize - we discussed his CG film, "The Guardian" and, near the end of the interview, he mentioned that his next film would be about little critters, like Gremlins. Now, low and behold, that film is done. Unreal, someone who makes a deadline and sticks to it! The film is called "The Furfangs" and I'll embed the five minute film below the interview.

As for the film itself, if Andrea was going for a "Critters" meets "Gremlins" homage to 80's films, he nailed it. By the way, what would you call those films? There was a pile of them, "Gremlins", "Ghoulies", "Critters"... and I'm sure there was more. You could probably put Peter Jackson's "Meet the Feebles" in there. Ahhh, maybe not. Funny how you don't see any films about furry little guys anymore. Anyhow, the creatures he created may not be as cute as Gizmo or as scary as a Ghoulie, but they definitely captured the look and feel. It's very well done and, if you've seen Andrea's previous work, you'll notice that he's moving in the right direction. His work is getting better and better each time.

Below is a short interview that we did with him and, like I said, below that is the actual film. I should mention that Andrea's from Italy, so there may be a few grammatical errors and things, but I'm assuming that it's because English isn't his first language...

So, tell us about what happened with "The Guardian". Did the film open any doors or get you any recognition?

After "The Guardian" (that have got a nomination for Best Independent Production at RONDO HATTON CLASSIC HORROR AWARDS) I made "Ufo Race", reviewed also on the SFX.UK Magazine, and after that came the next "The Furfangs". Although these shorts are shot "at home" with zero budget and only one MiniDV cam, they have received very good reviews from the audience and the cirtics. I hope to find some producers for the next, because I would like to reach better shooting quality.

Tell us about your next project, "The Furfangs"

"The Furfangs" is a five minutes sci-fi short movie, with 3D special effects, about mysterious and aggressive creatures who came from space.

Once again, you use 3D effects. Tell us about how you created the Furfang characters.

As I received favorable reviews about my previous shorts "The Guardian" and "Ufo Race" (which I made all by myself ) I decided to look for some collaborators to make a short movie which could be a tribute the 80's movies about little creatures, like "Gremlins", "Critters" etc. I found the collaboration of the 3D graphic designer Gennaro Acanfora that lives near to me. Music is by the composer Gianfilippo De Mattia. The creatures are completely in 3D and interact with a real character. In this short there is a large use of CG in almost every scene.
There is also some CG in kitchen utensils and the whole first scene about the spaceship that lands on earth. Some sketches about the elaboration of the creature design can be find on my site.

Talk a bit about production. How long did it take you to shoot "The Furfangs" and how long did post-production take?

"The Furfangs" took a week for the live actions shots and three months for the 3D effects; these were realized with Lightwave by the graphic Gennaro Acanfora.

Where can people watch "The Furfangs"?

The primary reference is my site andrearicca.com were you can find most of the reviews from the international film e 3D industry press. There are also all the info about "The Furfangs" and my previous short movies, and some backstages.

What's next? Are you working on another short?

I have an idea about an escape from a volcano eruption. I made the storyboard and now I'm finding the location.