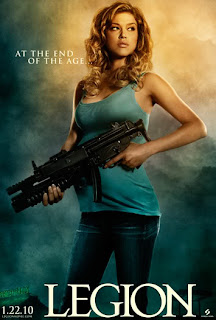 The good news for horror and "Nightmare on Elm Street"? It came in second at the box office. Bad news? It stumbled a staggering 72% to a meagre $9.2Million and is sure to completely disappear by next weekend. Having said that, Platinum Dunes has to be pleased with how it performed, having brought in around $50Million to date and costing around $35Million to make. It'll have a great run on DVD, VOD and all that and Jackie Earle Haley has signed on to do a couple more, so you know they're going to draw the series out. First place at the box office, obviously, goes to "Iron Man 2", which kicked off the summer movie season in a big, big way. It pulled in an estimated $133.6Million and far exceeded the opening weekend for the original, plus lands 5th among the highest-grossing opening weekends of all time. What's the next big film release? Well, it's "Robin Hood" and it hits the theaters this Friday. Universal has a lot riding on it, as their track record's a bit lackluster lately and they don't have anything else that big coming out this summer... "MacGruber", "Nanny McPhee Returns", "Little Fockers". Anyhow, it'll be interesting to see how it does - early reviews aren't that great. Now, let's see what's going on in the world of DVD horror. Unfortunately, Youtube doesn't seem to be working, so I don't have any trailers posted. However, you can click on the titles to be taken to the films page on Amazon, where you can read more and/or buy it.

" is the biggest budget release of the week. The film was directed by Scott Stewart and written by Peter Schink, then rewritten by Stewart. The cast includes Paul Bettany, Lucas Black, Adrianne Palicki and Dennis Quaid. You probably remember the trailer for the apocalyptic fantasy-horror, the creepy old lady? The film starts with the Archangel Michael, played by Bettany, who falls to earth in LA, clips his wings and then raids a police arsenal for a cache of automatic weapons... the bulk of the remainder of the film takes place in a roadside diner in New Mexico, where God unleashes angels to kill mankind because he's lost faith in humans. The budget wasn't massive, $26Million and it grossed around $55Million. Reviews are mixed and horror reviewers were particularly hard on it. My thought was, it's a rental... at best. So, here it is, available for rent. Check it out if you're bored.

" was written and directed by Anthony Fankhauser and I really can't find that much about it. I know it's about an insurance adjuster that's investigating a mysterious 'Tsunami Beach Club' because a bunch of people that were invited to the mythical club wound up dead. I can't find a trailer or anything, but Fankhauser has been involved in a bunch of mock-busters, including "2012: Supernova", "Snakes on a Train" and "The Day the Earth Stopped", so you can expect similar production values... which are pretty good. I definitely don't mean that in a negative way.

You may remember the original "Flesh for the Beast", which came out in 2003. It's from Terry West, the same guy who brought you "The Sexy Sixth Sense" and "The Lord of the G-Strings", and it's about a group of parapsychologists that check out a haunted mansion and encounter three flesh-eating succubus ladies. Anyhow, he's now offering up "Flesh for the Beast Media Mix

" this week, which includes a DVD, Blu-ray, CD of the soundtrack and a behind the scenes DVD called "Flesh for the Beast: Late Fee". As for the film? Expect nudity, sex and a bit of gore mixed in...

". It's written and directed by Kirk Bowman and we actually spoke with Kirk a while back, right after he finished up "Bloodsucking Babes from Burbank", I believe. Anyhow, his films are great fun and here's a link to the interview that we did with him.

Lastly, it's the no-budget film, "Disposal Of A Corpse

". I went online and all I could find was a 7 minute short, but it has the same guy in it that's in this film. Otherwise, I can't find anything else about this film. I'd love to know more, as it sounds like it could be alright. If you know anything about this film, please leave something in the comments section!
Posted by Dead Harvey at 10:16 AM

I think Daybreakers was bigger and better than Legion and thats also coming out. It was great

Hey Barry, you're right... Daybreakers does come out this week. I missed it because Amazon didn't classify it as a horror for some reason. Anyhow, good flick. Worth checking out.