What You Can Learn From The Films Coming Out This Week 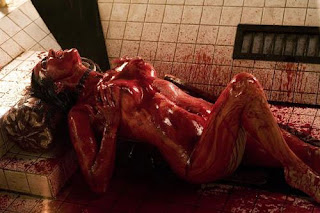 It's another well deserved Friday and I can not WAIT to get my drink on tonight... or later today... or maybe right after I post this. By the way, I couldn't think of a good picture that's related to anything I wrote about, so I posted this screenshot from "Hostel II". Came across it, liked it. Anyhow... I'll tell you what, I don't know what it is, but I seem to have just been working on lots of different projects lately. A few of which I'm sure I'll be telling you about in the near future... it's exciting and hopefully it all pays off, but it's been leaving me with just small windows of time to work on the site... but I'm dedicated to it. I just finished up a few major things this week, so next week should be a little easier on me. Anyhow, there's two big releases, neither of which are horror related, hitting the theaters this weekend, which are "Fast and Furious" and "Adventureland" and I have absolutely no intention of seeing either of them. However, as with everything in life, there's interesting things about both of them that you can learn from...

"Fast & Furious" is really "The Fast & the Furious 4", obviously... and it's an interquel that's set between the second and third movies. I believe this actually came to fruition after Vin Diesel directed a 20 minute prequel in the Dominican Republic last summer. Either that or... that 20 minute short is the prequel to this. I'm not sure and, quite frankly, I don't care. I saw the first one and none of the others... There's a couple of cool things that they did on this film, though, which you could do. The first thing that's cool is that they went out and got a bunch of sponsors for the film, including Kuhmo Tires, NOS and Odessie.com to supplement their budget. I think that's genius and I think a lot of filmmakers should be trying to get sponsors. Why not? If people want to give you money to mention their products in your film, take it. The other thing that interests me is, why is this franchise still around? Seriously, what makes it relevant at all? The answer? I think it's because it's basically a 90 minute video game... and what you can take away from that is, remember your audience and cater to them. It's basic fundamentals - figure out your audience, figure out what your audience wants, then give it to them. Sounds basic, but people tend to forget that. After those two things, it looks fairly forgettable.

"Adventureland" is also interesting, but only because they've been marketing this film online for close to a year already. They put up a teaser site, then had an online game, then Myspace, twitter, Facebook, flickr, the whole deal. I'm interested in seeing if it pays off, as it doesn't really seem like they did a lot of traditional marketing and advertising. I haven't seen many ads for it, I don't see too many posters, I mean, there's not much out there at all. However, I know about it. Much like "Fast and Furious", maybe they know their audience? Maybe they know that they exist online and that's how they're going to reach them. We'll see... once again, know your audience.

Lastly, there's an indie (by Hollywood standards) film coming out today called "Alien Trespass". I got a bit excited when I read the title, but it turns out that it's a comedy with Eric McCormack set in 1957 about an alien attack. Anyhow, I went over to their site and I have to say, it's a pretty good site. It doesn't do anything too crazy, no games or things like that, but it's a really good website that tells you all you need to know. If you're putting together a site for your film, go check it out and get some ideas - link.

There's only one festival related thing that I wanted to talk about and that's the 2nd Creative World Awards Screenplay Contest. It's LA based and gives you direct access to top level producers, agents and development execs. It's ranked in the top 5 on the Moviebyte's list, "Most Significant Contests to Enter". Also, they're affiliated with a lot of the horror companies, such as Lionsgate/Mandate International, Icon Films & Entertainment, Relativity Media and various others... further, they have separate genre divisions, so you don't have to be grouped in with all the fluff scripts. I tend to be very apprehensive about screenplay competitions, but if you're a fledgling screenwriter, you do need to enter them. It's a great way to get coverage and to get your stuff out there. You don't just enter any of them, though... you need to pick the good ones and this is one of them. Here's a link to their site, go check it out.