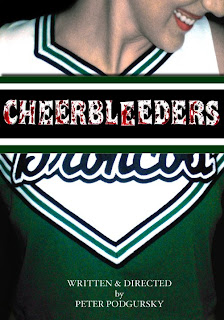 What's going on out there on Al Gore's internet? As usual, quite a bit.

A little while back, we interviewed Peter Podgursky, the guy behind the USC thesis film, "Cheerbleeders". What sucks about reviewing and talking about short films is the fact that they can be hard to get your hands on. Nothing like getting a bunch of people interested in a film that they're probably not going to be able to see. Well, this is the internet age, my friends, and, if I may quote Homer Simpson, "The internet? Is that thing still around?" Well, yes it is. And right now, and for another week or so, you can check out "Cheerbleeders" on New Blood, for FREE by clicking here. Also, I have to like the fact that they linked back to our interview with Podgursky, which you can also find if you click here. It's a great short horror film and it's a great interview. If you're in film school, thinking about film school or went to film school... or you just like good, short horror. Check it all out, good stuff...

Here's a link to an article that was on THR.com and, really, it's just for interests sake... You see, they've cast the major parts for the reinvisioning of "Nightmare on Elm Street" and you're getting "Twilight" actor Kellan Lutz, "Terminator" the TV show's John Connor - Thomas Dekker and Rooney Mara, who are all joining Kyle Gallner, who will be playing the role that Johnny Depp played back in 1984. So, am I the only one who thinks that all these actors are just a bit too good looking to be in this? I thought the same thing with the "Friday the 13th" remake, to be honest. Maybe I just consider myself overwhelmingly average looking, but I always figured that the idea was that the people in these films, the kids of elm street or the kids who visit Camp Crystal Lake, could be anyone - meaning, they could be you. Now, though, it's like they're from The WB. I think having model-like actors just adds to the disconnect between the viewer and the film, but... that could just be me. I usually root for the killer, anyhow.

Here's a wicked article on MediaPost.com called "How Can Independent Video Producers Compete In The Super-Premium Era? ". Now, I know that most people still see the big screen as the Holy Grail of filmmaking, with the small screen (TV) coming in second... however, that should change. I've said it a million times, but if you look at your film as just content and you're just trying to reach eyeballs, the internet is your buddy right now and, one day, it'll be your BFF. Not only that, as we progress, your content will be monetized a lot easier online... (read: you'll make more money with online content) That's not to mention, you'll have complete creative freedom and won't have to worry about being too over-the-top or anything. Anyhow, not only is the article interesting, the few comments at the bottom are interesting, too. The article is talking more from an advertising perspective, like... if you're making a web-based series and are looking to compete with the networks for ad dollars. Good read, though. You should know about this stuff.

Let's dip back into the THR.com well and read another article from them, this one called "Adults Steering Clear of Movies". The long and short is, 'pricey, star-driven thrillers and dramas' are stinking it up at the box office... they use "State of Play" as an example in the article. On the flip side, in these recessionary times, youth oriented films are kicking ass. It's easy math, when you think about it. Adults are worried about jobs, money, mortgages, bills, etc... and, not only are they cutting back, when they're looking for entertainment, it's probably going to be escapist-type stuff: horror, action, sci-fi, etc. Now, kids don't give an F about the recession. They're worried about who's going to buy them beer on the weekend or what brand their MP3 players is. On top of that, they don't care to see 'pricey, star-driven thrillers and dramas', anyhow. They've always been into the escapist stuff. So, if you're a budding screenwriter looking for something to write about right now, think about beefing up the young adult aspects and toning down on the serious stuff.

Lastly, remember those random clips that wound up in my inbox? You know, the ones that are really for the upcoming Donnie Darko film, "S. Darko"? Well, here's the third installment. I gotta say, these were all very well done and this last one really ties it all together. I'm not just saying that because they were done by our buddies at Fewdio, either. Anyhow, here's a link to the first one and here's a link to the second one. Last one is embedded below.

I every time used to read piece of writing in news papers but now as I
am a user of internet so from now I am using net for posts, thanks to web.