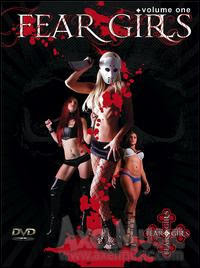 Before I get to the horror DVD releases of the week, I'd like to mention "The Wrestler

", which also comes out this week. Now, I'll admit something here... I do watch the occasional non-horror film and, I've gotta say, I've enjoyed a few of them. Not all of them, but a few of them... Granted, I do find that my tastes are wildly different than people that, say, liked "Milk" or "Frost/Nixon", but as a film guy, you have to appreciate a well done film. "The Wrestler" is one of those well done films and, if you haven't seen it, you really should. It had a budget of $6Million, which isn't much, considering the cast and how well it did and, as a low-budget filmmaker, you should appreciate the way it was put together. Check it out, you won't be disappointed. Anyhow, now to the horror. As usual, click on the titles and you'll be taken to their page on Amazon and you can also go to our Youtube page and see all the trailers.

" is written and directed by Robert Hall, who's actually a fairly big name in the make-up and effects world. He's currently working on the Breck Eisner directed remake of Romero's "The Crazies" (due out in September), has spent a bunch of time on "Terminator: The Sarah Connor Chronicles", plus worked on such projects as "Prom Night", "Pineapple Express" and "Red Sands". He's written and directed a couple of other films, "Lightning Bug" and "Behind the Sting", specifically. "Laid to Rest" stars Bobbie Sue Luther and has an appearance from "Sarah Connor Chronicles" lead, Lena Headey, and it's about a young girl (Bobbie Sue), who wakes up in a casket and has a traumatic head injury and no memory of her identity. She 'quickly realizes that she was abducted by a deranged serial murderer and must survive the night and outsmart the technologically inclined killer who is hell-bent on finishing what he started.' Just flipping through a few reviews, it looks like you can expect a pretty good slasher flick here...

", released by Lionsgate, comes from award winning filmmaker J.T. Petty, who won a special jury prize at the Boston Independent Film Festival for his film, "Soft for Digging". What's really cool is that J.T. Petty has spent a bit of time in the video game world, having written for the game "Batman Begins", as well as for "Splinter Cell". Further to that, I believe this feature was based on an web-based series that was also called "The Burrowers"... so, it goes to show that there's many roads to the goal and Petty took a non-traditional route. Hmm... I may have to get in touch with him to discuss this all with him. Very cool. Anyhow, this film is part creature-feature and part Western, as it follows a rescue party in the old West that falls prey to creatures that come up from underground to feed on the inhabitants of a small town.

", from writer/director Andrew C. Erin, which was an official selection at the 2006 Tribeca Film Festival. One of Erin's other films, a drama called "Simple Things", won him three awards. "Sam's Lake" is about Sam, who takes a group of friends to accompany her on a retreat to the cottage she grew up in, much like she does every summer. However, this time, Sam and her childhood friend Jesse take the group on an adventure to revisit the site of a murder and end up face to face with the terrifying legend of Sam's Lake...

", from director Tim McCann, based on a novel by Ed Gorman, is about a weekly poker game turned bad... Aaron Tyler and his three best friends end up accidentally killing a burgler who's broken into Aaron's home. Fearing the consequences, they dispose of the corpse and agree to take the secret to their graves. However, they soon discover that someone knows what they've done and is now playing a murderous game of revenge with them. The reviews are quite good, so if you're into character driven films with a horror twist, this could be for you.

" is your pick of the week. It's from writer/director Robert J. Massetti and it's four vignettes... the first is about a voyeuristic feast of a female vampire claiming her latest victim after an exciting sexual seduction, the second is where a victim turns the tables on their stalker in a sexy and bloody climax, the third is about an S&M party that takes a wildly violent and unexpected turn and the last is where we encounter some of the sexiest women in the world as they deliver nasty stripteases. 'The Fear Girls are hot, but cold blooded in these thriller tinged stories of passion and fate. Mature audiences only... view discretion is advised.'

Lastly, for all you Hellraiser fans, Clive Barker's releasing the "Hellraiser: Boxed Set

" this week. Well, Anchor Bay's releasing it, but... whatever. If you're a fan, you may dig it. It's loaded with almost 3 hours of bonus material and it comes in a custom made Hellraiser Puzzle Box that slides open to reveal the discs...
Posted by Dead Harvey at 9:10 AM