New Horror Out On DVD This Week: The Uninvited, Martyrs and more... 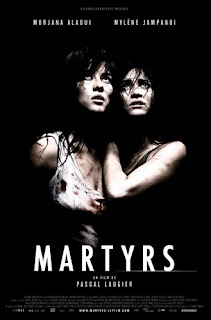 Finally, a week in horror that you can write home about... we get a great mix of films, from big-budget Hollywood fare, to low-budget Hollywood junk and from big-time foreign horror to low-brow domestic film. It's a Festivus miracle! A week for everyone! Anyhow, if you click on the titles, you'll be taken to their page on Amazon, where you can find out more about them and you can always head over to our Youtube page and check out all the trailers.

As far as theatrically released films are concerned, "The Uninvited

" is probably the biggest release of the week. It's a big-budget Hollywood film and it hit the theaters January 30, 2009 and it grossed a total of just under $30Million at the box office. It's a remake of the 2003 South Korean film, "A Tale of Two Sisters", but is unrelated to the 1944 film of the same name. It's the first feature film for directors Tom and Charlie Guard, who had big careers as commercial and short film directors for companies like Nokia, Euro Disney, PS2 and Xbox and it was produced by Walter F. Parkes and Laurie MacDonald, who happen to be the two that started the whole Asian remake craze when they redid "The Ring" in 2002. I don't think I have to tell you too much more about it, as you're probably aware of this one and know what you're getting into.

Now, as far as we're concerned, the big release of the week is "Martyrs

", the French film, written and directed by Pascal Laugier. "Martyrs" first screened during the 2008 Cannes Film Festival and was released in France on September 3, 2008. It's a brutal, horrific film that depicts extreme graphic violence and is being categorized as one of the 'new era French horror' films, of which "Inside" is a classic example. Personally, I find these films refreshing... and I'm a huge fan of new era French horror. It's not that I find horrific violence refreshing, but what I DO find refreshing is the fact that they're going the opposite direction of North American film. Where we're toning things down for mass audiences, they're ramping things up for specific audiences. Trust us on this one, go check it out...

"While She Was Out

" has a great cast, but had a very limited theatrical release and wasn't really reviewed all that much. Oddly, the few people that did review it, said it was pretty good. The plot is generic, but L.A. Weekly called it a "surprisingly enjoyable female revenge tale". It stars Kim Basinger, Lukas Haas and Craig Sheffer and it's a, uh... well, a female revenge movie. It was written and directed by Susan Montford and I'm not sure what else I can say about it.

First off, it's a horror comedy, so don't let the fact that Ron Jeremy is in a film called "One-Eyed Monster

" throw you... In fact, this one looks kinda funny. Adam Fields wrote and directed and it's about a hostile alien that wreaks havoc on the cast and crew of an adult movie. Did we mention that the hostile alien takes the form of Ron Jeremy's detached penis? Yeah, go check out the trailer. Could be a must see.

" is a Sci-Fi original documentary that comes from Christopher Saint Booth. If you're really into demonic possession and go for the real stuff over the Hollywood stuff, you should check this out. Apparently it was one of the better originals that aired on Sci-Fi AND it's chalk filled with extra footage. It surrounds the story of The Watseka Wonder, America's first documented possession in 1870. It's 'the chilling story of a 13-year old girl...who became possessed by spirits of the insane dead.'

" comes out this week. However, if you're not aware of "Satanic Sluts", they're a tongue-in-cheek burlesque group from the UK and they've expanded into films, they have a website, they have pin up calenders and on and on. This is the third film in the series and if you check out the trailer, you'll know exactly what you're getting with this one - lots and lots of naked, sadistic chicks.

" came out in Japan in 2005, as "Gimi hebun" and it comes from Toru Matsuura... if you're into over-the-top Asian gore, you're going to pass on this one, although it is a good flick and has some great surreal imagery. It's about a guy who has a rare condition called synethesia, where one form of stimulus triggers a completely separate response... he keeps it a secret, even from his fiance. Then there's Mari, who also has synethesia and keeps it a secret. Their paths cross and they get caught in a world where they uncover serial murders, mysterious codes and a bizarre stranger, Picasso - 'The Merchant of Death'.

" is from co-directors Dean George and Joel Franco and it's a good looking indie horror about an elite unit of FBI agents who are hunting a conniving vampire in a small Nevada town. It features James Hong, who you'll remember from tons of shit, but mainly as Quan from "Tango & Cash". It also features Martin Kove, who you'll ALSO remember from tons of shit, but mainly as John Kreese from "The Karate Kid" or, maybe as Ericson from "Rambo: First Blood Part II"? You know him... yeah, you know him.
Posted by Dead Harvey at 9:05 AM