New Horror Out On DVD This Week: Splinter, The Telling and much, much more... 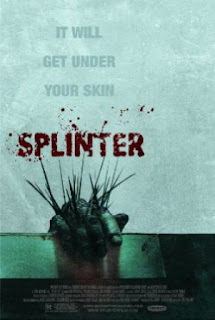 It's Monday and I'm a little late with this post, but it was a long weekend and I'm taking today off work. I'm a little groggy and a little under the weather, so bear with me... and I'll get through this. It's actually a fairly good week for new horror and, as usual, click on the titles to go to their Amazon page to find out more or head over to our Youtube page and check out all the trailers.

Although the plot to "Splinter

" starts out, and appears, fairly standard (A young couple retreats to the wilderness for a romantic camping weekend, but the trip quickly spirals into a nightmare when they are carjacked by an escaped convict and his girlfriend), it quickly takes a few turns. The group of them end up getting trapped in an isolated gas station by a voracious Splinter parasite that transforms its still living victims into deadly hosts... basically a fungus-like parasite that turns its victims into mutant, beast zombie things. Think "The Thing", but it infects people and really fucks them up, I guess. In any case, it's won piles of awards, including Best Horror Film at the Academy of Science Fiction, Fantasy & Horror, as well as Best Picture, Best Directing, Best FX, Best Make-Up and a few others at Screamfest. Definitely the film of the week... looks great.

A lot of low-budget filmmakers like the 'anthology' format, as it allows you to make three short films and tie them together. It can work out if you have three filmmakers with minimal budgets that want to pool their resources or if you want to chop up your shooting schedule and manage everything better or if you just want to space things out and make life a bit easier. Anyhow, "The Telling

", co-directed by Nicholas Carpenter and Casey Ward is one of those anthologies. It's not low-budget, by any means, as it's produced by and stars Bridget Marquardt of "The Girls Next Door" fame... yeah, that's right. The Playboy Playmate. Yup, she's also got a bunch of her friends in it, too. Fitting, also, as it's about three girls who pledge the most popular (and cruelest) sorority on campus and, for their final task, they must tell the scariest story they know. So, that's the set-up. Then, there's three distinct stories... which inspire someone at the sorority to commit their own murders.

", written by a guy named Sxv'leithan Essex and directed by Christopher Hutson, is about Sai, 'a young artist living in a downtown warehouse that delves into an ancient world of blood and lust. An enigmatic foreigner seduces her to try a long forgotten drug making her the prey of a dimensional vampire who needs her new found hunger for blood to cross over from his world to hers'. It's a slower moving film and, if you're into drawn out, artsy, surreal, moody, vampire films. This, my friend, is a film for you.

" has a very distinct 70's or 80's feel to it. I'm not sure why... it could be the compression on the trailer I watched. Anyhow, this film ain't going to be for everyone. It's written and directed by Jason Paul Collum and it would be what's classified as a gay horror. It looks like it's the sequel to another gay horror called "October Moon". It's about a couple of guys, with a shared secret (I wonder what it is?) who enter the lives of the survivors of the first film... then all of them are tossed into a scenario of bloodshed, torture and the ultimate hell of death, mutilation and destruction... and, apparently, not in that order.

" is from Danny Pang, of 'Pang Brothers' fame... who, if you didn't know, are the guys behind the original "The Eye", all subsequent remakes and sequels, and the kick-ass film, "Re-Cycle". This was called "Sum yuen" in its native Hong Kong and it's about a dark forest, known for causing mysterious deaths, which becomes the focus of a recent savage murder. So, a homicide detective, a botanist researching the paranormal and his tabloid TV reporter girlfriend each embark on a treacherous journey to the heart of the "Forest of Death", where a chilling revelation awaits them all. I'm not sure if evil fighting botanists are going to catch on like "The Eye" did, but... you never know.

From Hong Kong, we go to Mexico... "Helena's Cry

", or "El Ilanto de Helena", as it's known in Mexico, is about Isabela, whose daughter, Helena, died in a tragic road accident. The death is under investigation by a couple of journalists who find out that rumors of a strange apparition from beyond the dead may actually be responsible for the killings of the those unlucky ones traveling through there at night. I'll tell you what... that sentence doesn't make much sense, but I'm trying to make sense of the description I'm reading. It must be directly translated from Spanish, as it makes no sense at all... it ends with, something to the effect of... the reporters uncover an incoherent history in which the evil forces seem eager to continue killing the innocent. Yeah, well... what evil forces wouldn't want to continue killing the innocent? Something lost in translation on this one. Check out the trailer.

No, this "Summer School

" is not the "Summer School" from 1987, starring Mark Harmon, Kirstie Alley and Courtney Thorne-Smith. Side note here, I totally forgot that Shawnee Smith, from the "Saw" films, "Repo! The Genetic Opera" and "The Grudge 3", pretty much got her start in the 1987 version of "Summer School". Wow... Anyhow, this "Summer School" is from Lance Hendrickson, no... not Lance Henrickson, and it's about a guy who watches a lot of B-horror and is forced to go to summer school. He's in class with his buddies, his high-school crush and, if his teacher doesn't drive him insane, what lurks in the school just might...

" is a low-budget horror from Matthew Bora and it looks pretty good... The plot revolves around a local philanthropist who puts a $2.5Million bounty on finding Big Foot, as he's been up to no good in the area, killing a few people... and the like. So, a group of free-spirited college friends, as well as a bunch of bounty hunters, head up into the woods to look for the legend and have a weekend retreat. Well, the college guys are on the retreat, the bounty hunters are up there to chew bubble gum and kick ass. Of course, the trip turns to shit when they actually encounter the unspeakable terror. It's Man vs Beast and there can only be one left standing.

There's also a few rereleases of note, a few of which are from an off-shoot of Lionsgate called "The Lost Collection"... which basically means they had a bunch of movies in their library that no one cares about and they're trying to make a few bucks off them. "Slaughter High

" was alright, but "My Best Friend's a Vampire

"? Really? Anyhow, you also get "The House That Cried Murder

" and "Teenagers From Outer Space