Film Fest Updates, A Wrap Up and... "The Mutant Chronicles" 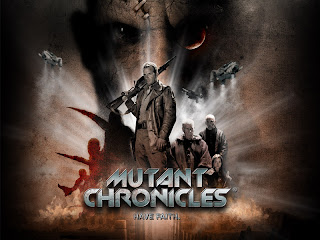 Well, here we are... Friday. Bless. I can already taste the cold beers... that could be because it's 8AM and I'm three beers in. Kidding, I'm only on my first.

Anyhow, for horror fans, it's a bit of a slow weekend at the theaters. If you're lucky enough to live in L.A. or New York, though, you're in the only two cities that are playing "The Mutant Chronicles". Otherwise, you're stuck with Disney's "Earth", "Fighting", "Obsessed" and/or "The Soloist". It's too bad, too. "The Mutant Chronicles" looks awesome. It's got Thomas Jane, Ron Perlman and John Malkovich in it... check out their site here. Why couldn't this have got a bigger release? Seriously, it looks wicked...

So, on to our wrap up, updates and such and such... As you know, we're all about helping out friends around here. Remember that, as if there's anything we can do to help you out... make sure you let us know. For example, do you remember Tom Seymour? He's the co-writer and co-director of all the "Bikini Bloodbath" films. If you want to read the interview we did with him a while back, you can find it here. Anyways, he sent us an email, asking for a bit of help on getting people to vote for his film, "London Betty", to be one of the finalists in the Hobboken Film Fest. So, click here to go to the page on The NY Post's site where you can vote for it... now, go vote for it. I'd do it for you.

There's also a couple of new festivals you should know about...

This is the 4th anniversary of the "NBC Universal Short Cuts Film Festival" and they've just expanded to accept comedy, drama, sci-fi and, that's right... horror. Obviously, there's going to be lots of industry people that are watching these, so it's probably a pretty good deal for you, especially as there's no entry fee, so... why not enter? The other thing is, it's NBC Universal... really, they're probably looking for new content and some good ideas. Ideally, you'd be submitting a film that's 5 - 7 minutes long, although they will look at stuff that's up to 30 minutes long. So, if you've got an idea that could be good for TV, this could be a good opportunity for you.

Then there's the "Producer's Challenge! Presented by the Producers Guild of America" and it's not too hard to figure out what's going on here... First off, there's the "Produced By Conference", which you can register for and it's basically a weekend conference, where you can hang out with and hear from a bunch of A-List producers. There'll be speakers, networking opportunities, workshops, things like that... However, they're also doing a video contest and they're looking for narrative shorts, documentary shorts and webisodes. Prizes include a mentoring lunch with a 'mega-producer', such as Gale Anne Hurd, Marshall Herskovitz or Mark Gordon; an all-session access badge to the 2010 Produced By Conference and equipment for future projects and much, much more! What I find interesting is the fact that they're looking for webisode content... Considering that you probably know more about making a good webisode pilot than they do, it could be a good opportunity to get something out there.

Coming up in Louisville, KY this August 14-16, it's the 5th annual "Fright Night Film Fest". They're the largest genre film festival in mid-America AND they're currently accepting submissions for all types of films and screenplays - click here to be taken to their submissions page. It's a wicked festival to both attend and submit to, so check it out. We'll definitely keep you posted on this one...

And, did you read our interview with David Pruett, the Festival Director of Dark Carnival Film Fest? If not, check it out here. It was a great interview, good insight for filmmakers looking to submit to festivals. Anyhow, they sent me a press release to post... this is another festival that I'll continue to keep you posted on...

We welcome you join us for the 1st Annual Dark Carnival Film Festival Screenplay Competition. We are excited to include a competition for screenplay writers who enjoy writing what we love to watch - HORROR. The writers start it all so we want to be part of discovering new talent.

That's it for this week, folks... have a great weekend!
Posted by Dead Harvey at 9:00 AM