New Horror Out On DVD This Week, including: Donkey Punch and House 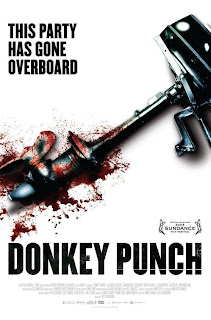 I ran out of coffee, so I have to admit... I'm not firing on all cylinders here. Confusion and moments of staring blankly at my monitor have been quite common over the last hour or so. Anyhow, I wasn't going to allow my caffeine withdrawal to get in the way of my Monday morning post... It's here in its entirety and I'll be promptly out the door soon after I hit 'publish' to go get some of that delicious liquidy black gold. As usual, you can click on the titles and go check them out on their Amazon page and you can go to our Youtube page to see all the trailers.

I can't recall if this version of "House" had a theatrical release or not and I'm not even sure if it's related to the 1986 film, "House

". What's confusing me even further is the fact that this one is based on the novel by Frank E. Peretti and Ted Dekker, written by Ted Dekker, Frank E. Peretti and Rob Green and directed by Robby Henson. So, is it just random coincidence that the guy who wrote the 1986 film is named Fred Dekker? Plot-wise, they seem very different... and the 1986 version was a horror/comedy, this is straight horror. They say that this had a theatrical release on November 7, 2008, but I don't recall it. Really, this is going to be a tough morning... so, this about four guests and three owners who find themselves locked in an old, rustic inn by a homicidal maniac. The maniac claims to have killed God and threatens to murder all seven of them unless they produce the dead body of one of them by dawn. It's released by Lions Gate, who's also picked up the rights for Dekker's fastest selling novel, "Adam".

Continuing with this theme of me not being sure of things, I don't know if I'd consider "Donkey Punch

" to be a horror, but it is a thriller and does have some horror-like elements that you'll definitely be into... for example, the trailer has a chainsaw wielding girl in it, so it's got that going for it... which is nice. It's a British film, filmed over 3 weeks for about $1Million. Yes, the term "Donkey Punch" refers to the sex act and, yes, it's done in the film. In fact, it's the whole point. A bunch of people go out on a yacht to party, the party gets out of hand and a guy ends up killing a girl while performing the donkey punch. So, the remaining people debate what to do and the film surrounds how each of them deal with their consciences, which erupts into violence, death and a fight for survival.

", which looks particularly good and creepy, was nominated for a couple of awards and also ended up winning the Carnet Jove Jury Award at Sitges. Its from Fabrice Du Welz and it's about a couple who go looking for their child who was lost in the tsunami in Thailand. Their search takes them to the dangerous Thai-Burmese waters, and then into the jungle, where they face unknown but horrifying dangers. Tough to explain, but you should really check out the trailer.

There's also a couple of Sci-Fi originals being released, including "Ba'al: The Storm God

", which is from Paul Ziller and is about a terminally ill archaeologist who attempts to cure his cancer by retrieving the ancient amulets of the storm god, Ba'al and "Swamp Devil

", which is from David Winning and is about a swamp monster... "Swamp Devil" actually won four awards in various categories and various festivals, including Best Foreign Feature, Best Director twice and best actor for Bruce Dern.

" has a fairly intense looking trailer, which you can check out on our Youtube page. It's a wicked looking indie horror from Sean Tretta, who also made "Death of a Ghost Hunter" and "The Great American Snuff Film". This looks to be one for the torture porn crowd, as it's been called "Saw" meets "Grindhouse". It's about a group of online deviants who are invited to an abandoned factory to witness a 'bloodletting', an event displaying the torture and murder of an innocent person. Once inside, they realize that they've been lured there by a self-righteous madman who uses the factory and its bloodthirsty inhabitant as his own personal version of Hell.

" comes from Randy Aldridge and it looks like he's got his whole family involved with this one, as there are four people with the last name Aldridge in the cast... which must have been awkward at times, as the trailer is filled with girls in their underwear getting slaughtered. The plot is about a killer who's escaped from prison with one thought on his mind, revenge on the Fontaine family. However, it looks like there's a few twists and turns. I couldn't find the trailer on Youtube, so if you want to check out the trailer, you'll have to go to the Celebrity Video Distribution site, here's a link.

" is the self-proclaimed "best local, hometown, no-budget, Northeastern United States movie of the decade". However, they do have a disclaimer below that saying that that is, in fact, their opinion and that there was, also, a very small budget. I can't find a trailer anywhere, but I can tell you a bit about it. It's about the experiences of Kevin Wright, a guy looking for a solid, long-term relationship with the right woman. The story shows what he has to go through, including an unexpected and quite dangerous side-effect from chronic masturbation. He also gets pegged as the prime suspect in a murder investigation, making things even worse... That's about all I can tell you.

Ulli Lommel is back with "Baseline Killer

", another film in his string of serial killer movies. This time, he takes the name of a real killer, but makes up the story. I'm not really sure what's going on here, but judging by the trailer, it looks like a group of girls get together to hang out in their underwear and drink. Then, a guy with a gun shows up and starts shooting them all... is it me or is Ulli getting worse? But, that may insinuate that he was good at one point. I don't know what's going on here... almost through this.

" and the classic and legendary, "Nosferatu DVDTee

", which gives you a DVD copy of the 1922 classic, plus a T-Shirt with the original poster are on it.
Posted by Dead Harvey at 9:00 AM

This is Keith, the director of "Murder Is Like Sex". I no longer have any connection with the small company (the name escapes me) that has released the movie. The quote on the movie's website did NOT come from me. I think the real distributor, Tempe Films is doing an excellent job, though. I would say more, but I signed an NDA contract, Oops...

I was being sarcastic... it really doesn't matter what I say, because the "contract" also stated I was to receive a certain percentage of the sales of the movie. As of right now, I haven't received ANY money, even though the movie has been released for about three years...

But that aside, the reason that I made the initial post was to clarify that the statement in question was not from me.

Thinking about it further, though, most of the people in the NE OH indie film scene know me well enough to realize that I would never insult them by advertising that a movie that I wrote and directed was better than theirs. I consider many of them personal friends and respect their work.

That's all I am going to say. I am already hard at work on another project, and I am directing all my energy into making the best movie that I can.

Hmmm, something going on here...

Hey Keith, if you read this, we'd love to check out "Murder Is Like Sex" and discuss it with you. Shoot me an email at ted@deadharvey.com