New Horror out on DVD this week... the evil clowns continue. 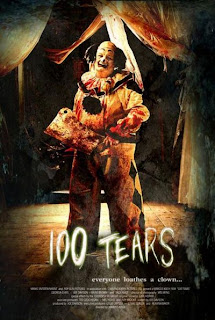 Now, this is what I call a good week in horror... there's only 4 real horror films out and they're all indie films that look unreal. I suppose a lot of people would avoid releasing this week, as there's some other big movie coming out this week called "Dark Knight". However, if you're not into that whole big-budget scene, these should suit you just fine. So, as usual, if you'd like to help us out and were planning on buying the films, click on the titles and buy them off Amazon, through us. Also, head on over to our Youtube page, where you can see all the trailers. You'll want to this week, for sure.

" is what happens when a special effects guy gets to go ape-shit on his own movie. Marcus Koch, who's done piles of special effects, not only did the effects on this, but also directed this new installment into the evil clown subgenre. This is definitely a film for the gore-hounds, as it looks like a relentless onslaught of guts. The story revolves around a couple of tabloid reporters who start to look into the notorious 'teardrop killer'. Check out the trailer, that's all I'm saying...

" would get from the MPAA, but it was written and directed by Corbin Timbrook and it's anything but PG... or PG-13... or even R. If the trailer is any indication, the film is filled with boobs, gore, heavy metal and midgets. And, really, that's all any movie needs as far as I'm concerned. Further to that, the girls that it does have are hot, which includes Shelly Martinez from TNA wrestling and Kasey Poteet, who's appeared on Howard Stern and briefly, topless, in "Hell Ride". I don't think I have to get into plot points or specifics here... you know what you're getting into when you go here.

Friend of Dead Harvey and the guy behind "The Horror Vault" 1, 2 and 3, Kim Sonderholm is out with his latest film "Craig

". We were supposed to get a screener, but I guess a lot can happen when you're sending your film from Denmark. "Craig" is actually Kim's feature length directorial debut, even though he's an industry veteran. "Craig" is about, well... a guy named Craig, who is left on his own when his parents die in a fire. Then, when he loses his medication, his world is turned into terror and fear.

There's a lot of different paths that people take to get their films made, but I can say that Ryan Harper's path is definitely unique. Starting out as a molecular and cell biologist, he continued to do creative writing as a hobby. He wrote his feature script, "Circulation

" and sent it off to the studios. Surprise, surprise, it didn't get picked up. So, he said "F it" and went off to make it. Now, what kind of film would you expect a molecular and cell biologist to make? Well, "Circulation" is about a purgatory where dead people keep their human form and the world looks the same, however people develop animal instints and the human and animal worlds intertwine as one... yup. Sound F'ed. Gonna have to check it out.

I have to mention that James Gunn's breakthrough classic, "Slither