After Dark Horrorfests "8 Films To Die For" 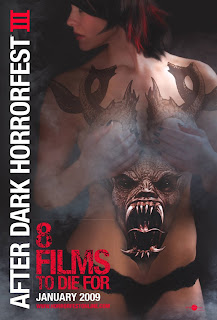 I briefly mentioned After Dark's "8 Films To Die For" festival in my post yesterday, but when I looked back at it, I realized that I only mentioned 6 movies... and it's supposed to be 8. Perplexed, I decided to look into it. Turns out that the first film I mentioned, "Slaughter", is actually also part of the fest AND I left out the film "Voices". So, for those of you who are keeping score, the 8 films in the "8 Films To Die For" festival are, in fact: "Slaughter", "Perkins 14", "The Broken", "Butterfly Effect: Revelation", "From Within", "Dying Breed", "Autopsy" and "Broken". Just to mention it again, both "Slaughter" and "Perkins 14" are of particular interest to me, as they're basically collaborative works from amateurs. Anyhow, you can find out more about the festival, each film and all that type of crap on their site, which you can find be clicking here. But I will talk more about the fest...

Let me just start by saying that I love the whole concept of the After Dark Film Fest, which is, essentially, to give nation-wide theatrical releases to films that otherwise wouldn't get a theatrical release, by packaging them all together, creating a marketing campaign for the whole thing, then finding theaters across the country that will play them all for a week. They do a big launch party, plus they do a Miss Horrorfest contest, things like that. It's the whole power in numbers thing. One filmmaker may not be able to get that much buzz or a theatrical release, but 8 of them with a unified mission under one banner, can. It's a great idea... and we, as a horror community, should really support it. Now, with the cost of making 35mm prints for each theater, this isn't something that just anybody can do, there's some serious dough behind all this. However, when they finally figure out who's going to pay for switching all the theaters over to digital systems, this could become something that everyone can do. And much like how I think that gaming consoles and the internets are going to change up the home distribution model, digital cinema is going to change the theatrical release model. Now for some babble...

I think I could write a novel, or maybe just a novella, on how f'ed up this all is... but to sum it up, the theater owners want to pay as little as possible for the rights to show a film, while getting as many people in the theater as possible because they're really just in the popcorn selling business. The studios hold power in that they have the big releases that the theater owners want, BUT the studios also have stinker films and smaller features, so they make deals where theaters need to show certain films for X amount of weeks and they have to accept other, smaller features IF they want to get X amount of prints for the big budget films. Stuff like that. Having said THAT, the theater owners hold power over the studios because they're the gatekeepers in getting the studios the box office numbers that they need because good box office numbers boost their DVD sales, especially in foreign markets. So, they try to manipulate each other, they fight, they collude. It's dirty. ANYHOW, where does this leave indie guys who are looking for theatrical distribution? Not in a good place AND this is where the fight over switching over to digital comes in... the theater owners want the studios to pay for it because the studios will be saving millions in not having to make all the 35mm prints. The studios don't want to pay for it because if the theaters switch over to digital systems, the market will be opened up to smaller players because the cost of getting a theatrical release just dropped to, well... just having to put together a marketing campaign. So, I have no real conclusion on this, but to pull it all together, the model that After Dark is using for "8 Films To Die For" could work VERY effectively and efficiently if theaters were to switch over to a digital platform. When it does, bands of indie filmmakers could get together, market their films as one and get theatrical releases in multiple markets. Then, that would give them some good numbers and media for their press kits, which would boost their own DVD sales, which would be good for indie film, as a whole. Right? That, of course, goes without mentioning the fact that theater owners can change their line up instantly, giving theater goers what they want instead of running those stinkers and films that no one wants to see... so the audience wins, too.

So, anyhow... "8 Films To Die For" gets its one week theatrical run across the US from January 9th to 15th. It's going to be in almost every major market and it's something that you should check out for a few reasons... The main one should be because you're an indie horror fan and you just want to see the films. However, you should also check this out because you're seeing what could be the future for how more indie horror could be making it to the big screen and make you, the indie horror filmmaker, a lot more money.
Posted by Dead Harvey at 10:30 AM