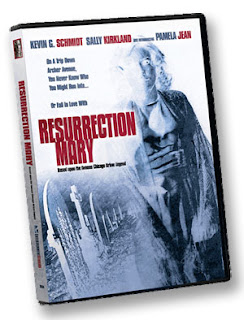 As a reader, I'm sure it seems like the last month or so on Dead Harvey has been business as usual. However, if you lifted the curtain, you'd see us running around like a bunch of drunken idiots, just trying to get the bare minimum done every day. (we're usually drunk idiots, but we rarely, if ever, run) I'm up in Vancouver and between my day job and this, I'm doing twice the work these days for around the same pay. Further, Brad's down in L.A. and his computer's busted and he's out shooting something that the whole Dead Harvey team's been working on. (More on that to come soon) Anyhow, I've got tons of emails to get to, a pile of screeners to watch and I haven't updated parts of the site in a while and... yeah. That's about it.

ANYHOW, I recently checked out "Resurrection Mary", a film from Sean Michael Beyer, and I went to their Myspace page to talk with them about it. To my suprise, I ended up talking with none other that Resurrection Mary herself, Pamela Jean.

Pamela Jean, sometimes billed as Pamela Noble, is an actress, a model and, quite frankly, looks fantastic as a dead girl. That's not to mention the fact that she held her own in a film filled with seasoned actors, including a personal favorite, Richard Riehle, who was involved in "The Beach Party at the Threshold of Hell", "The Hebrew Hammer" and even "Deuce Bigalow: Male Gigolo". You know him, I know you do. The film itself is based on a real life ghost story, Chicago's most famous, actually. The film is not a blood-fest, nor does it have any nudity. However, it's a great ghost story that an entire family could watch... maybe. I don't know, I'm jaded. Anyhow, we had the chance to discuss the film with Pamela Jean and the producer, Dale Noble, filled in for a few technical questions...

So, tell us about yourself. Where did you start out and what brought you into indie horror?

I'm 20 years old, I've been acting and singing since I was 5. Most acting kids get homeschooled, but i always said i wanted to go to regular school and experience everything. So, because of the little amount of school i could miss without being automtically failed, the biggest roles i could get were supporting roles, commercials, and music videos. I graduated in 2006 and 2 months later i landed the role in this film as the lead.

“Resurrection Mary” is based on a real ghost story from the Chicago area. Where did the idea to turn it into a film come from?

One of the writers, Ryan Lamaster, was from Chicago. We wrote out the story idea presented it to Sean Micheal Beyer, the director, and other writer and together they wrote it and it turned into what it is.

What was the approximate budget for the film and how did you secure it?

The Distributor will not let the budget out yet. They are still doing sales. Secured thru a Investment Group.

What was it shot on and how long was the shoot?

The film was very sharp and well put together, what were the most important aspects of the filmmaking process that achieved that look and feel?

Make up and hair for me did a lot in making me look like I was not from present times. We also had a really great cimematographer, Seamus, and a lot of the interesting looks from the film came from him.

I really liked the comic book style transitions, where did the idea come from?

lol i have no idea. it wasnt in the script and when i saw the final cut of the movie for the first time it was there. I got all excited and said, "Im a cartoon!"

Wild Wild West TV show did the cartoon thing way back and it has been used by a few other TV shows since.

There were a few scenes that could easily have had a lot more gore and with a whole scene that takes place at a high school party, there could’ve been a lot more nudity, as well. Talk about the decision to not include a lot of gore or nudity in the film.

Well, from the beginning every one didnt want the film to be R but not PG either. There was never any nudity, not even close, but we watched what we did (cursing) and took several different takes on those scenes, so they had their options and in the end it still turned out as a pg-13 which is what we all wanted. 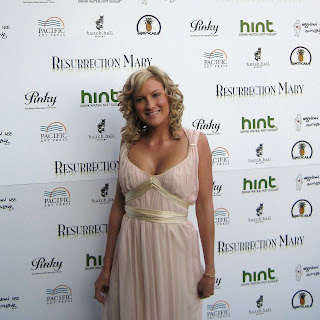 The film had a fairly seasoned cast, although none of them would be considered household names. A side note, I personally loved the fact that you got Richard Riehle in the film, who’s a veteran of the indie horror scene. Talk about working with a professional cast versus an amateur cast.

Well, the only people I actually got to work with was Kevin Schmidt and Kyle Davis. But I got to talk to everyone on my down time. I loved Richard Riehle, Charlie Schlatter, and Sally Kirkland, they were always so sweet to me and telling me they believed in me. And the amatuer actors were awesome too. They arent amatuers they've been in plenty of films so they taught me a lot.

It was great. The fondest memory i have was during a lot of the night shoots it was in the low 30 degrees. Me and Kevin were freezing and everyone knew, so during part of the shoot one night Sean took off his sweatshirt, jacket, and beanie and stuck out the cold with us.

Did “Resurrection Mary” hit the festivals? If so, how did it do and is the festival circuit something you would recommend to other filmmakers?

We already had Disturbution, so it did not go to the Festivals.

Talk about securing distribution. What was the process like for you and is there any advice you would pass on to other filmmakers looking for distribution?

It's all albout a good story and, in most cases, about who the Director or Actors are.

Talk about the indie horror scene right now? What do you think of where it’s at and where do you see it going?

Distributors are saying that there are too many being made right now. If something does good, everyone goes for a Horror or Cowboy film etc.

Where can people find out more about “Resurrection Mary” or, better yet, buy a copy?

The easiest way so you dont have to search through stores is go on resurrectionmarythemovie.com and on the main page it will have a list of stores that you can buy it at, you just click a store and order it, and it will be sent to your house, theres no easier way. (Ted's note: You could also click HERE

and buy it off Amazon, through us!)

What’s next? Are there any more projects in the works?

I've been doing a lot of modeling lately because I've been promoting the film, so much I havent had time for more acting jobs, but i'm in talks for an action film right now and I have a movie called the diet life coming out in 2009
Posted by Dead Harvey at 9:00 AM