New Horror DVD's out this Week... 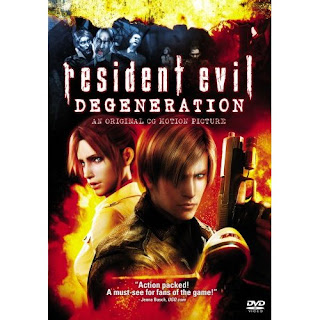 As I warned a week ago, it's another slow week in horror... but, with the year coming to an end, Christmas this week and the inevitable family gatherings, it doesn't really matter, as you probably don't have much time on your hands, anyhow. Looking at the handful of movies that are coming out this week, they look pretty good. It may be too late to get them for Christmas... but if you want to buy any of these films, you can click on the titles and buy them off Amazon, through us. Also, you can head over to our Youtube page and check out the trailers. Finally, this should be our only post of the week, as there's just too much S going on. You may get a drunk rambling or two, but we'll be back in full force next week...

The big release of the week is "Resident Evil: Degeneration

", which is available in both Blu-ray and regular def. It's a feature length CGI film, writing by Shotaro Suga and directed by Makoto Kamiya. So, I'm going to take a stab in the dark and say it's a Japanese film... and, after further inspection it, in fact, is. It's more based on the video games than the existing films, as the plot revolves around characters from the games. In the film, a zombie attack brings chaos to Harvardville Airport and Leon S. Kennedy and Claire Redfield, who fought the sinister Umbrella Corporation during the Raccoon City tragedy 7 years ago, are back. I actually had a chance to watch the first little bit of it and it's exactly what you would expect from an R rated, CGI zombie films. If that's your thing, you should check it out.

Also out this week is the Dimension Extreme released, "Pulse 3

", which is a little shocking because I swear that "Pulse 2: Afterlife" JUST came out... they must have shot them all at once or back to back. If you remember, the original "Pulse" was written by Wes Craven and Ray Wright, directed by Jim Sonzero and it was based on a Japanese film called "Kairo", about a computer hacker who accidentally channels a bunch of ghosts and demons through a mysterious wireless signal. "Pulse 2: Afterlife" was written and directed by Joel Soisson and was loosely connected to the first one... "Pulse 3" is, once again, from Joel Soisson and the plot of this one revolves around a girl who travels back to a city populated by the dead in the search of a mysterious internet lover.

" is a film that you and I should probably check out... as I haven't seen it yet, but have heard quite a bit about it. Jay and Mark Duplass are a couple of micro-cinema filmmakers, who went out a few years back and made the indie film "The Puffy Chair", which you probably haven't heard about because it's a sensitive, funny, quirky relationship movie. However, while shooting it, a crew member raised the question, "what's the scariest thing you can think of?". Someone replied "a guy with a bag on his head, staring into your window." And "Baghead" was born from that conversation... they set out with $50K and came back with this, a film that opened at Sundance and had buyers calling them, making insanely inflated offers.

The last film of the week is "99 Pieces

", which won Anthony Falcon, the writer and director, the Festival Recognition award at the Bare Bones International Film Festival in 2007. It's about a guy who wakes up to find his wife missing and a puzzle to solve. He then must reconnect with his life and discover a puzzle of lies and deception about himself, his wife and his family in order to stay alive for the next 40 days and nights... while living through starvation and horror.

Have a great holiday season... and we'll talk to you soon.
Posted by Dead Harvey at 9:00 AM

If you would like an alternative to casually picking up girls and trying to figure out the right thing to do...

If you'd rather have women pick YOU, instead of spending your nights prowling around in crowded pubs and night clubs...

Then I encourage you to view this eye-opening video to unveil a weird secret that has the potential to get you your very own harem of hot women: