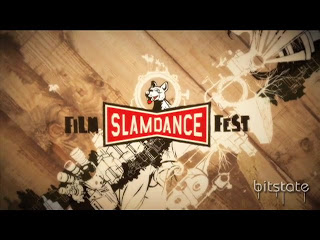 So, Slamdance has announced their 2009 Programming... and, believe it or not, 2009 is the 15th anniversary of the Slamdance festival, which is crazy. Good work, guys. Taking place in Park City, alongside Sundance, Slamdance takes place January 15 - 23, 2009 this upcoming year and they'll be screening about 100 films in total. I was supposed to go last year, but couldn't make it... and it's been on my "to do" list for a while, but then again, so is going to Mexico to get wasted for a week. Both aren't happening anytime soon. Anyhow, if you can make it, it's a great place to get a bit of snowboarding in, do some boozing and check out some films. Also, due to the "indie" nature of the Slamdance festival, they tend to get some good horror films... and this year looks to be no different. Highlights include the opening night film, "I Sell The Dead", from Glenn McQuaid, which is about a duo of bumbling graverobbers who begin to unearth peculiar corpes. Other horror notables are "The Ante", about an innocent man who becomes the killer everyone wants him to be; "The Conjurer", which we've covered before (click here) and is about an old cabin with a dark history and "Mum and Dad", which is about a murderous and perverse family that imprisons a young woman in their suburban house of horrors, where she discovers she has to become part of the family - and joining them in their insanity... or die. Now, here's the REALLY cool part... New this year is an online venture with indieroad.net, where Slamdance films will stream anytime throughout the festival, bringing the festival to a worldwide audience. It'll cost you $9 per film and around a third of all the money goes to the filmmakers... you gotta like that. You'll find that site here, at indieroad.net/slamdance. Also, if you want to know more about the festival, you can check out our interview with Slamdance Executive Director, Drea Clark here.

For our overseas readers or those over here who would consider travelling overseas and like a little international flavor, Dead By Dawn, Scotland's International Horror Festival, is gearing up. They're back for their 16th year (take that, Slamdance) at Filmhouse from Thursday April 30 - Sunday May 3, 2009. Also, Spawn of Dawn is returning on Saturday, May 2. I received a press release and they're bringing it up now because tickets and passes go on sale in January... and, if you're thinking of travelling there, you might as well start thinking now. For more on Dead By Dawn, go to their homepage, which can be found here.
Posted by Dead Harvey at 10:16 AM