New Horror Out on DVD this Week: Creepy Clowns Explained 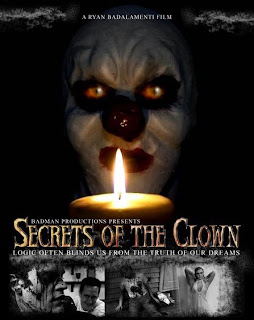 This lead up to Christmas tends to actually be a pretty good time for indie-horror, as big companies are concentrating on releasing Christmas themed films and family friendly shit. So, some of the indie-horror guys release good stuff for the horror hungry group of guys who will take whatever they can get. And this week, there's actually some great indie horror titles. So, if you want to help us out a bit and were planning on buying one or some of these films anyhow, just click on the title and get it through Amazon, through us. Also, head on over to our Youtube page where you can see all the trailers.

Before I get to all the indie-horror, I just want to mention "The X-Files: I Want to Believe

", as I've always had a soft spot for "The X-Files", mainly because I actually worked on the show for a few episodes and it was the biggest thing in my hometown of Vancouver for quite a while. However, I gotta say, I wasn't too impressed with the first "The X-Files" movie and I haven't seen "The X-Files: I Want to Believe" yet, which comes out on DVD and Blu-Ray this week. That doesn't mean I won't check it out, I probably will... This one was directed by the shows originator, Chris Carter, and was co-written by Carter and Frank Spotnitz. Carter said that if this one was deemed successful, he would do a third movie that went back to the TV shows mythology and focus on the alien invasion foretold within the series. Sounds good, shoulda done that this time around... 'cause now we'll probably never see that third one.

" was written and directed by Shawn Darling, who's the owner and CEO of Gryphon's Egg Productions. Shot entirely on mini DV, it's a zombie flick that was picked up and distributed by Maxim Media International. I have no idea what their budget was, but looking through the production stills, the make-up and effects look awesome. In fact, on their site, they boast that it has over 300 visual effects shots and over 350 prosthetic makeups. They also boast that it's an "80's style zombie horror film with a whole lot of production value." Well, I'm sold...

", written and directed by Ryan Badalamenti, won the Best Feature Horror Film at the New York International Independent Film & Video Festival in 2007. It's about a guy, a girl, a clown doll, their friends who die a lot... and the hidden secrets of the clown. What got me thinking is that some reviewer on IMDB.com called it "an interesting addition to the clown horror subgenre" and I never thought of clown horror as a subgenre. He mentions "It" and "Killer Klowns from Outer Space", but what else is there? "Poltergeist" had that creepy clown toy. Does Spaulding from "House of 1,000 Corpses" count? Isn't there a movie called "Clownhouse"? A quick search brings up "Killjoy", "Dead Clowns", "Fear of Clowns", "The Blair Clown Project", "100 Tears", "The Clown Murders" and "Gacy". Come to think of it, do you think that John Wayne Gacy's alter-ego, "Pogo the Clown" was where it all came from? Clowns have always been creepy, I guess and Pogo certainly didn't help clown enthusiasts. I guess clown horror is a subgenre, probably an underserved subgenre, too.

Written and directed by Todd Livingston, "So, You've Downloaded a Demon

" is a shot on DV entry into the 'horror-comedy' genre. It's about four college students who stumble across an occult website and accidentally release a demon that is imprisoned there, then... and I quote, "Hilarity ensues". It's the directorial debut from Livingston, although he's been around the genre for a while, having written a few other scripts, acted in a few films, produced a few things, etc.

", from Richard Perrin, is about a group of college kids on a road trip to hell who come across a small Texas town whose entire economy based on stealing cars and slaughtering people. The production quality looks fantastic for a low-budget indie horror and they've got a cast that consists mostly of hot, young girls that never seem to get out of their bathing suits, even when they're tied up, chopped up or shot up. This looks like one that you'll need to check out.

", directed by Keith Parker and co-written by Parker and, who I'm going to assume is his wife or sister, Laura Parker, is another shot on DV film, this one about a billionaire seeking to fulfill an ancient dark prophecy for immortality, who pits 6 individuals against shadowy demons, for their souls, in a murderous game of cat and mouse.