New Horror out on DVD this week: A bit of Christmas Horror... 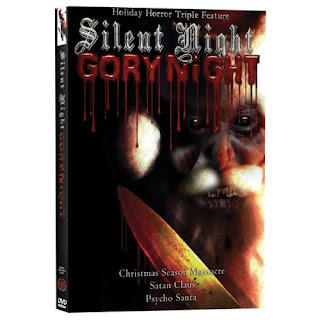 Another slow week in horror and, outside of "Resident Evil: Degeneration", which is a feature length CG motion picture based on either the video game or the movie, don't expect much next week, either. They like to release more family friendly films over the holidays, as they make better gifts and families tend to be together. I guess some families don't huddle around the TV to watch slasher flicks... Anyhow, if you're looking at buying any of these, please click on the titles and buy them off Amazon, through us. Usually, I would say you can head over to our Youtube Page and check out all the trailers, but I could only find two of them this week. Pathetic, I know. You can find the "Wild Country" Trailer here, I couldn't find "Spiker", "Satan Claus" or "Psycho Santa"... sorry!

The ONE good thing for horror over the Christmas holidays is Christmas horror, of which there's simply not enough. Although these aren't the best of the bunch, at least it's out there for the people who don't want to sit around and watch "Mamma Mia". "Silent Night, Gory Night

" is a triple feature of Christmas horror, including: "Christmas Season Massacre", "Satan Claus" and "Psycho Santa". "Psycho Santa", from Peter Keir, came out in 2003 and I don't know much about it, but I think it's an anthology on its own... "Christmas Season Massacre", from Jeremy Wallace, came out in 2001 and is about a loser who becomes a maniac who hunts down all his schoolyard tormentors and "Satan Claus", from Massimiliano Cerchi, came out in 1996 and is about a santa dressed serial killer in New York who's building a Christmas Tree made of body parts... Ahh, bless.

" comes from Frank Zagarino, who also stars in the film. It also has a few other guest stars, including the festival director of the New York Horror Fest, Michael J Hein. Zagarino is a bit of a B-Movie cult action figure, having acted in such film as "Project Eliminator", "Alien Chaser" and "Project Shadowchaser III". You'd probably recognize him, if you saw a picture. Anyhow, this is one of two films that he's directed and it's about serial killer who plunges railroad spikes into you to kill you ("Spiker", get it?).

", out of the UK, was written and directed by Craig Strachan and it's his second feature, having also done "Hidden". It shot on DV, but the creature looks pretty good... I'm just not sure how much of it you'll see as the trailer doesn't show too much, but I saw a few wicked stills. It's about a youth church group that finds a baby abandoned out in the woods and on their way back to safety, they're chased by the wild beast intent on protecting its brood, which relentlessly pursues them one by one...

" is the feature length directorial debut from Bill Platt, who won a couple of awards for his Sci-Fi short, "Bleach", back in 1998. I believe "Bleach" was a student film of his... he's also worked as a producer on a few things, as well as other random positions. This is the last thing on his resume, so I'm not sure what's next. However, go check out the trailer, it looks pretty f'ing awesome for a film that I've heard virtually nothing about. "Darklight" stars Shiri Appleby as the immortal Lilith, long hunted by a secret society known as the Faith. Lilith lives as a 24 year old girl, not aware of her ageless past, when Faith recruits her and trains her to use her mystical power, known as Darklight, for the good of humanity.
Posted by Dead Harvey at 9:00 AM