The Weekend Box Office and The Week in Horror on DVD 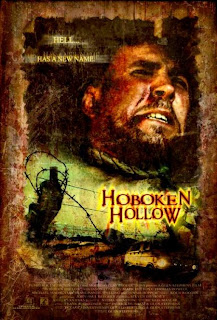 Over the weekend, "Inception" became the fourth movie of the year to go three straight weeks at number one. The other three? "Avatar", "Alice in Wonderland" and "Shrek Forever After". Also, "Inception" has now become the seventh highest-grossing film of 2010... So, batten down the hatches, folks. We've got a hit on our hands here. Now, if you haven't seen it, I do recommend it. It's a mind-fuck movie and it's got lots of twists and turns and great effects, but most importantly, it's Christopher Nolan and he's proving that he's a top-tier filmmaker. Also, I love that he came from pure indie roots. His first film, "Following", which came out in 1998, took over a year to shoot because the whole cast and crew had other full-time jobs and they only shot on Saturdays. Sound familiar? His next film after "Following" was "Momento" ...and if you don't know that film, I'm not sure what to say, but go get it... and now. As for the rest of the box office, "Dinner for Schmucks" was a new release and it did well for a comedy, coming in second. "Salt" was third, "Despicable Me" was fourth and both weren't new releases. "Charlie St. Cloud" came in fifth and "Cats & Dogs: The Revenge of Kitty Galore" came in sixth, both were new releases and would be considered disappointments... I assume. As for the week in horror on DVD, it's not bad. So, let's get to it. You can check out all the trailers on our Youtube Channel and you can click on the titles to be taken to the films page on Amazon, where you can read more and/or buy it.

", written and directed by Glen Stephens, has a great cast, including Jason Connery, C. Thomas Howell, Michael Madsen, Robert Carradine and the late Dennis Hopper. I can only assume that Hopper's passing has something to do with this release, as it originally came out in 2005 and it didn't really do much then. It's sort of a hillbilly horror with some roots in reality. It's about a ranch that picks up workers, usually vagrants and poor folks, and then, well, tortures the crap out of them. Apparently this stuff happened, at least there's lots of urban legends about it. So, that tends to make it just that much more creepy... also, price is right on this DVD, they're selling it for $6.99.

" and I think there's a lot of room for other filmmakers to explore this little sub-genre. I'll explain... horror is about fears, right? Taking things that people are scared of in real life and then throwing it in their faces. Well, there's something scary about buying and selling a home. In fact, there's LOTS of scary things about it. From having strangers and random people coming through your house when you try to sell it all the way to not knowing what kind of house you're buying or what kind of neighborhood you're moving in to? Get it? Really, it's scary stuff and there's a lot to work with in this whole concept. Anyhow, "Open House" deals with a couple that's trying to sell their house, but finds out that one of the potential buyers never left the open house.

" looks a little odd and may not be my cup of tea, but... it could be yours. It did win an award at Shriekfest 2009 - best fantasy feature film, so I may be the odd man out. Actually, I haven't seen it, so I may be jumping to conclusions, but anyhow... The film draws heavily on Grimm's fairytales and, in fact, calls itself a Gothic fairytale. From what I can tell, a group of people head into the woods where they encounter a beast... but the beast leaves a poem behind for one of the girls. That's right, we're talking a gothic "Beauty and The Beast" horror here. Anyhow, it could be interesting. In fact, I'm actually turning myself around here, maybe I'll check it out.

", from Ryan Badalamenti, is also a bit of a rerelease... I only say that because I remember it from a while ago and it came out in 2007. It won best feature film at the New York International Independent Film & Video Festival and it preys on everyones favorite fear, the fear of clowns. Price is right on this DVD, as well... again, $6.99.

I have to comment on the Asylum double-pack, Blu-ray release of, "Haunting of Winchester House / I Am Omega

", because I love Asylum releases. "I Am Omega" takes the "Omega Man" idea, where the main character is the last human on earth, and gives it a bit of an action spin. It came out right around the time that "I Am Legend" came out... Martial Artist Mark Dacascos takes on the zombies and does some serious ass kicking. "Haunting of Winchester House" was brought out after the slew of haunted house films came out, notably "The Haunting in Connecticut", which I'm assuming this was based on.
Posted by Dead Harvey at 9:44 AM

Glad to see you have Open House on here! Just read this review and can't wait to watch it http://www.fearnet.com/news/reviews/b19786_dvd_review_open_house.html

Yeah, I'm excited for it, too. I've got it here and I'm anxious to check it out. Trailer looks great.

Thought I'd let you know that also coming out this week are all 8 films that were part of the Fangoria FrightFest. Some of the trailers looked great I'm pretty sure you can get them at BB online this friday.

That's right... Fangoria did an exclusive deal with Blockbuster. BB gets them this Friday, everone else gets them in October or something. Here's the link to info: http://www.fangoriafrightfest.com/

It has been said that any bettor must watch this,