Lessons For Indie Filmmakers - Following Up With Christopher DiNunzio 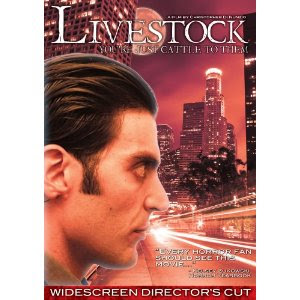 They don't write too many books on the business of indie film... at least none that I can find. I mean, there's a million books on film, lots on the film industry, and more than enough on screenwriting, filmmaking and producing. I'm talking about the gritty in's and out's of the business of indie film. Not "independent film", but true, micro-cinema. Dead Harvey stuff. I'm knee deep in a couple projects right now, but I'm seriously considering writing a book on the micro-cinema world. I've got some ideas on how it should work and I have PLENTY of content, so if you're in the book world and think you can help me out, let me know. Anyhow...

Somewhere in this lack of information is where we try to fit in. We talk to the festival directors, the filmmakers and the distributors and we try to let you in on how this all works. Quite frankly, we've got a long way to go until our heads are around it, so we keep talking to people and asking questions, then posting them for you to read. Today, like I hinted at a few weeks ago, we follow up with Christopher DiNunzio, the writer/director of "Livestock".

We originally spoke with Chris over a year ago, right as he was looking for distribution. You can read the original interview here. So, how did it go? Was he accepted to the festivals? Did he get distribution? Did he make some money? Let's find out...

Let's remind our readers about both you and "Livestock". First off, tell us about the film. What's it about, where did the idea come from, when did you start shooting and when was it released?

The short synopsis is "A mysterious cult and two best friends take a new direction in life and soon dark secrets are revealed when their worlds collide. " The idea started as a film based around online dating but it ended up morphing into this gangster horror film. We shot it in Fall of 2007 and it was released in November 2009.

Now, tell us a bit about yourself. What are your influences and what got you in to indie film?

My influences are Michelangelo Antonioni , Dario Argento, Sergio Leon, Kiyohsi Kurosowa, John Carpenter, Roman Polanski and many more. I've always loved film and I got into filmmaking after seeing Argento's films. That's the first time I saw film as an art and I knew this is they way I wanted to express myself.

"Livestock" was accepted into 3 festivals, so I'm pretty happy about that. We didn't apply for too many. Unfortunately the funds weren't there. I'm more aware now of which festivals actually support indie films, rather than catering to studio films. I've learned to make sure that the festival I'm submitting to is going to be a good fit for my film. With all that being said, it can still be a big crap shoot.

Now, let's talk about distribution. If I remember correctly, the film was picked up by R-Squared Films. Talk about the process of finding them and getting a deal.

They actually contacted me through my website, so I sent them a screener and they liked it and picked it up! The process was pretty easy, but you need to be patient. Also, you want to do as much research on them as possible to make sure that you are the right fit. We actually had a few people contact us and I even learned so much from them just from hearing what they had to say.

Looking back at the time from when the film was finished to now. What things did you do right and what things would have done differently?

I wouldn't do anything differently. The whole process was a learning experience and now I feel battled tested. Going through it a second time I feel even more comfortable. I believe that with each film I will improve more and more, becoming more proficient. You just can't be afraid to fail. That's the worst part about filmmaking. You have to overcome your fear of failing.

Let's talk about monetization. You don't have to disclose actual figures, but, generally, has the film been a financial success for you? Is there anything you can pass on to other filmmakers, as far as what they can expect to get back after they finish their film?

It's doing good, but it could be doing better. I would love to see more promotion for the film. But, I can't complain too much because it is widely available. You can purchase it on Amazon, Best Buy and soon on Netflix. My goal for "Livestock" was to just get it out there and prove that I could do it. You can't only expect money in return. You have to look at it as an opportunity to become a visible filmmaker.

Let's talk about the last year... overall, talk about the work that you've continued to do for "Livestock". Have any unexpected things come up?
Anything you could pass on to other filmmakers?

I've had to push the promotion here and there, but not too much.
Mostly I've been trying to move on to new projects. There's not too much you can do once you get picked up other than hope that the distributor does a lot to promote the film. Once you're done with the film you gotta just take a nice look back then move forward.

Have you been working on any other projects over the last year? What's next for you?

Absolutely. I just completed a feature length documentary "Viva!
Saint Agrippina". It takes place in Boston's historical North End and it's about the Saint Agrippina Benefit Society, who have been hosting an annual feast in honor of the martyred Saint since 1914. I loved working on it because its way out of the box for me. Most people who know me know that I'm not religious, but I've had family members involved in this for years. I thought it would be a perfect opportunity for me to try a different style of filmmaking. Overall I really loved the pacing and freedom of working on a documentary and would love to do more in the future. But, for right now I'm itching to do another horror film or a gangster film, but this time I don't want to blend the two. It has to be one or the other this time.

So, has your opinion on the indie film world changed at all and has this process encouraged you or discouraged you to continue making films?

I think my opinion has changed as far as what people expect from an indie film. It's just interesting that sometimes people assume just because you make a low budget horror film it has to be all tits and gore. Don't get me wrong I love all that but I wish people would give horror films more credit that that. It can be a very artistic subject if you want it to be. Horror has many faces. However I'm happy to know that there are a lot of people out there that are very supportive and more than happy to back an independent film. But I'm not discouraged at all. I'm hard-headed, so I won't quit!
Posted by Dead Harvey at 8:52 AM

If you would like an alternative to casually flirting with girls and trying to figure out the right thing to say...

If you would prefer to have women pick YOU, instead of spending your nights prowling around in crowded bars and restaurants...

Then I urge you to view this eye-opening video to learn a amazing little secret that has the potential to get you your very own harem of beautiful women: