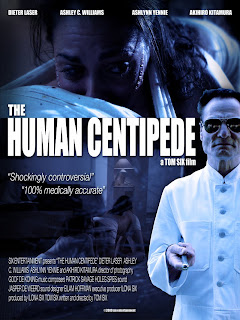 It goes without saying that the Toronto International Film Festival is one of the big fests of the year. It ranks up there with Cannes, Sundance and Trebecca. It's also big for horror... because, in conjunction with TIFF, we get Toronto After Dark. Toronto After Dark is now in its 5th year and they bring attention to new, innovative, independent and international horror, sci-fi, action and cult films and they JUST released their 2010 lineup. What I like about it is that festivals like this are a good gauge for what's going to be hot over the next year or so. Festivals like this not only break films, but they break new sub-genres and film styles. So, as a writer or emerging filmmaker, it's good to look at what's coming out and it may even give you some ideas. Here's a link to the announcement, but I'm going to look at and discuss a few of the films that are screening.

"The Last Lovecraft" is a monster comedy where a group of social misfits battle an assortment of sea monsters that are trying to take over the earth. Now, I'm bullish on monster and creature films... and if you're a regular reader, you probably know that. It's interesting to see that the formula for zombie films is being taken to monster films, which is a new twist. I mean, there are so many zombie comedies that it's spawned a whole new sub-genre called the zombedy. These days, if it's not a comedy about social misfits fighting zombies, it's against the grain. So, I think this is big for the monster and creature sub-genres. Maybe not this particular film, but the fact that films like this are getting made and getting out there. Watch for more creature features and monster films... I think they're going to be big over the next year or so.

"Doghouse" and "Evil in the Time of Heroes" are both part of Toronto After Dark's Zombie Appreciation Night. Truthfully, how much gas is left in the zombie tank? It's unbelievable. But, people still love them and they still sell... so, guess what that means? They're going to keep making them. I mean, "Zombieland" was a big hit last year and Romero seems to be back on track, making a new dead film every couple years. I wouldn't venture this path, personally, but... it's interesting to see the legs that the genre has. Zombies seem to always sell.

"Human Centipede" and "Rubber" are both, simply, bizarre. I haven't seen "Rubber", but I've heard about it. It's about a killer tire with feelings and it screened at Cannes. "Human Centipede", I have seen and, well... it's about a scientist that wants to create just that - a human centipede. He wants to sew humans together, ass to mouth. You've gotta see it, it doesn't disappoint. The interesting thing is that these bizarre films are getting their due. I mean, the ideas are way out there, but people talk about them, they get a ton of buzz and people watch because they're intrigued. If you wrote a script called "Human Centipede" and submitted it to screenwriting competitions or to agents or managers, you're damn right it's going to get read. Why? Because it's called "Human Centipede". Writing or making bizarre films is a great way to get noticed, just make sure you can deliver when they get past the title.

Anyhow, I suggest you go through their site and check out all the films that are screening. Have a great weekend!
Posted by Dead Harvey at 9:55 AM

I enjoy looking through an article that will make men and
women think. Also, many thanks for permitting me to comment!

Ahaa, its nice discussion regarding this paragraph here at this web site, I have read all that, so now me also
commenting at this place.

Here is my blog workouts to increase vertical jump

Thank you for the auspicious writeup. It if truth be told
was a enjoyment account it. Glance advanced to more brought agreeable from you!
However, how could we keep up a correspondence?

Wow, that's what I was exploring for, what a material! present here at this website, thanks admin of this web page.

Here is my web-site ... reputation management