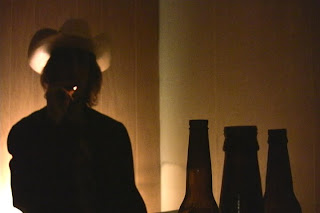 You know how when you think about something, you see it everywhere? Like, for example, say you're in the market for a new car and you want a convertible. Prior to wanting a convertible, you don't take notice of them... so, you don't see many. However, once you make the decision to get a convertible and you put it in your mind, you see them everywhere. Not only that, you start to take notice of different things, you analyze them, you research them... before long, you're an expert on convertibles. I feel I'm getting to that point with short films.

Not that I'm an expert on short films, but I'm becoming an expert on where to find them, what's good about them and what they can do for filmmakers. I truly believe that short films are going to be what spec scripts were... sort of. Everyone had a spec script, not everyone has a short film. Short films are an easy entry into the game. A short film or a webisode that has tons of hits and views online will get noticed and, if it has enough hits, will get picked up. Hollywood likes anything that people watch, anything that gets eyeballs or readers or gets people talking. The fact that "Shit My Dad Says" is one of the most talked about TV shows coming up this Fall proves that. So, because I believe that a good short film can act as a calling card, I'm going to keep talking to filmmakers that are out there making short films. I want to know about their motivation. I want to know how they made them and what their plans are... and maybe, just maybe, I can motivate a few of you other guys to get off your asses and go make one yourself!

Today, we talk with Duncan Meece, who's put a few shorts out there. We're going to talk about two of them, "First Time" and "Cough".

Tell us about your short films, “Cough” and “First Time”

Both films are dark walks through troubled minds. “First Time” is about a young man’s dilemma when trying something new. Cough is about a smoker trying to hide from his troubled past. Unfortunately, since the films are so short, I can’t say much more without giving away their endings.

If you don’t mind us asking, what was the budget for your films?

There was no real budget for the films. All the props and equipment we used were things I'd already owned. I had the camera for a couple years before, which was about 600 bucks at the time I bought it. I lit everything with a couple clamp lights my dad had lying around his shop, which is also where we shot “First Time.” We shot “Cough” in my uncle’s abandoned house which had been made unlivable by a hurricane. And the actors are friends of mine and worked for free, of course. 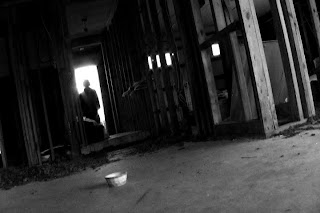 You did a great job on the cinematography. What camera did you use and talk about how you accomplished some your favorite shots.

The camera I used was the Canon VIXIA HV 30. It’s a great camera for the price. In fact, it’s probably my favorite camera I’ve used. And no, Canon is not paying me to say that. After writing a script, I’ll make out a list of every shot I need. I very rarely storyboard because I’ll often modify my shots once I get on location anyway. The list works well for me because it tells me the essential shots I’ll need to tell my story and still leaves me room to improvise on set. The look of my films is more a result of the low key lighting rather than the camerawork as far as I’m concerned. Also, I think the video look gives it a strange feeling. It was shot in standard definition on mini DV tapes. So many people shooting on mini DV go to ridiculous lengths to try and make their videos look like film. I’ve even heard of people stretching pantyhose over the lens, whatever the fuck that’s supposed to do. It all seems pointless to me. People who draw with a pencil don’t try to make their drawings look like paint. Video is its own medium and it shouldn’t have to be ashamed of that.

I thought you did a great job on the sound, as well. What did you cut the film on and how did you score the films?

All the dialogue from the cowboy and the sound effects in “First Time” were recorded after shooting was completed. The only bit of dialogue that was recorded during shooting was the young man’s one line, “Can I have another beer?” which took about twenty takes to get due to microphone issues. The dialogue was recorded directly into the camera with a lavalier microphone, and split into two tracks. It was then run through a continuous noise filter to remove any extraneous sounds. The music is all electric guitar, recorded on a freeware audio recorder and processed into electronic sounds old school with various filters, ring modulators and assorted effects. It was edited with DC Art Millennium. All the audio work and the music was done by my father, Tim Meece. After I got the polished sounds back, I edited the film in Adobe Premiere Pro.

This is going to sound really strange but I remember the exact film that got me into filmmaking and the exact moment it happened. Believe it or not, it was the animated film “The Great Mouse Detective.” Particularly, the scene at the end where the rat falls from Big Ben. That really affected me for some reason. I remember going into the kitchen after it ended and telling my mom “I want to make movies when I grow up.” A couple years later I got my first camera and I’ve been making them ever since. As far as influences go, the top of the list has got to be Takashi Miike. I also like David Lynch, Kubrick, David Cronenberg, Gaspar Noe, Scooter McCrae, who did Sixteen Tongues and of course, Tarantino.

Well, it definitely wasn’t for me. I’m proud to say I’m a film school dropout. There are some good things about film school. You can get criticism from your teachers and classmates and it makes getting a job much easier. However, they teach you a lot of pointless bullshit in school. And they make you pay for it. If you’ve got the determination, you can make it without school. Anything they teach you there, you can learn for free on your own.

Talk about your goals behind making “Cough” and “First Time” and did you accomplish them?

My goals for making these shorts were primarily to learn filmmaking techniques and to develop my visual style. Also, since I didn’t go to school, I figured shorts would be an easy way to make a name for myself. I did learn some things that will hopefully make my next films better and I suppose this interview is evidence of me making a name for myself so I suppose I did accomplish my goals.

There are a lot of interesting films being made now. With all these fucking remakes coming out and polluting the mainstream horror world, the indie films are really the only good horror films but I suppose that’s always been true. Films like Paranormal Activity have proven that indie films can still make a lot of money, although I thought that film was extremely overrated. With the internet now, filmmakers that would never even get a second glance in Hollywood are starting to emerge. There’s as much shit on the internet as there is anywhere else, but if you sift through it, you can find something amazing every now and then. I think the future of horror and of cinema in general is with the internet.

Where can people check your films out?

You can see my films and hear my father’s music, at our website dissonantaberration.com

I’m currently working on a script for what I plan to be my first feature. It will most likely be several years before I get around to making it unless someone reading this interview decides to give me a big pile of money (fingers crossed). When I do decide to make another short, it will be something different from what you’ve seen in my previous work. Also, I plan to start doing music videos. If you subscribe at dissonantaberration.com, you’ll be kept up to date on everything.
Posted by Dead Harvey at 9:44 AM