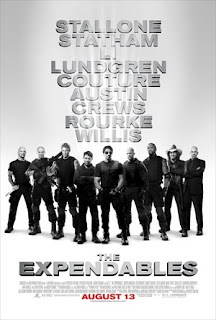 I was hopeful, but I didn't really think it would happen... but it did. "The Expendables" won the weekend at the box office. Unbelievable. A throwback action film, written and directed by Sly Stallone, beat out "Eat Pray Love" and "Scott Pilgrim". Further to that, it beat out "Rambo", which was awesome, and gave Stallone his biggest opening ever... although, that's not in terms of actual audience. In any case, a big day for the action genre. Does this mean that 80's style action movies are going to make a comeback? I doubt it, but... it does suggest that (a) put together properly, there's still a market for these films and (b) that guys like Stallone and Dolph Lundgren still have some fuel in their tanks. The way I look at it, it boils down to concepts. Twenty Five years ago, the concepts didn't need to be that big... or smart. Ex-Colonel has his daughter kidnapped by terrorists, Ex-Colonel kills all the terrorists. Reanimated dead soldiers do evil deeds, one with a good heart turns on them. Bad dudes hunt humans for fun, but accidentally pick on an ex-marine. Psycho Ex-Marine gets sent back in to Vietnam to finish the job... you get the picture. These days, those ideas may not fly when that's all it is, just a premise. However, big concepts wrapped around a simple premise will. Highly skilled mercenaries are commissioned to assassinate the dictator of a small South American island... and the group of mercenaries are played by ten of the biggest action stars of the last twenty five years. Layers, big concepts, clean ideas, solid and simple plot - easy sell. I think that a lot of screenwriters think that they need to over complicate things to make it more saleable in today's market... it's not complexity that they're looking for, it's clean, simple ideas with a good concept. That's why this is a success. Anyhow, let's move on to the DVD's of the week. It's not a great week for horror, but it'll do. As usual, you can go to our Youtube Page to see all the trailers and you can click on the titles to be taken to their page on Amazon, where you can read more and/or buy the film.

" and "Dark And Stormy Night

" both come out this week and they were both written and directed by Larry Blamire. Blamire's films are more like cult comedy, but they're definitely in the horror realm. His directorial debut was the predecessor to "Lost Skeleten", called "The Lost Skeleton of Cadavra". He followed that up with "Meet the Mobsters" and "Trail of the Screaming Forehead", before making these two. His films are throwbacks to old, old-school horror films from the 40's or 50's.

Quite frankly, based on the premise, I can't believe that "Burning Bright

" got made. I mean, this film has some serious budget and the plot is utterly ludicrous. A young girl and her autistic brother are in the care of their stepfather, after the death of their mother, and he just pilfered her college fund to buy a tiger for his safari park... and now a hurricane hits them and the tiger gets loose in their home. I think I'm going to have to check this one out, just to see it.

If you want to pad your horror collection with some cheap, quality Roger Corman films, this week is your week. There's both the "Roger Corman Creature Collection

" and the "Roger Corman Horror Collection 2

" coming out and they're going for $6.98 each. The Creature Collection comes with "Attack of the Giant Leeches", "The Wasp Woman", "Creature From the Haunted Sea", "A Bucket of Blood" and "Last Woman on Earth". The Horror Collection comes with "The Little Shop of Horrors", "The Terror", "Dementia 13", "She Gods of Shark Reef" and "Swamp Women".
Posted by Dead Harvey at 9:36 AM