More Surprises At The Box Office, The Emmy's and the week in Horror on DVD 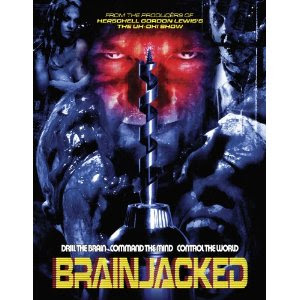 It was a big weekend, to say the least - not only did horror unexpectedly win the weekend at the box office, we had the Emmy's. First off, I don't think anyone expected "The Last Exorcism" to win the weekend... and it did, but in a photo finish with "Takers". In fact, when final numbers come in, they may switch. Anyhow, "The Last Exorcism" was produced by Eli Roth and it's shot like a documentary, so it's sort of a mockumentary horror. It was directed and edited by Daniel Stamm and the story is told from the perspective of a disillusioned evangelical minister that decides to participate in a documentary chronicling his last exorcism, which he thinks will expose the fraud of his ministry... and, let's just say, the 'found footage' may tell a story that the good minister didn't expect. There's a couple of other interesting things here, as well. One, which I really liked, was the viral campaign that they did for the film using Chatroulette - you can see what I'm talking about here. The other thing that I find interesting is that supernatural horror films just seem to always deliver... and especially when there's no big star or name attached. Lately, "The Unborn", The Exorcism of Emily Rose" and "The Haunting in Connecticut" all did surprisingly well. That goes without mentioning "Exorcist: The Beginning", "The Amityville Horror" and "Stigmata", all of which came out in the last 5 years or so and also did alright. I guess it's a good sub-genre to play in. I also quickly wanted to mention the Emmy's, where a few dark and horror-themed shows got nods, including: "Dexter", "Breaking Bad" and "True Blood". It's interesting to note that HBO, far and away, is the leader when it comes to award winning shows and they do it by pushing the envelope... however, on the flip side, pushing the envelope may get you awards, but it doesn't always get you advertising revenue. So, take all that for what it's worth. Anyhow, let's check out the week in horror on DVD. As usual, you can go to our Youtube Page to check out all the trailers and you can click on the titles to be taken to the films Amazon page where you can read more and/or buy the film.

Speaking of horror on TV, "The Vampire Diaries: The Complete First Season" comes out on both DVD

this week. It premiered on The CW Network on September 10, 2009... and I watched the first few episodes, but quickly lost interest. It's really more for the "Twilight" crowd. No surprise, it's based on a book series of the same name by L.J. Smith. The first season won a People's Choice Award and seven Teen Choice Awards... the second season starts on September 9th.

", which is available on DVD and Blu-Ray this week, but I'll be getting my hands on it soon. The trailer is enough to hook you... good God. It's a British deal and it's a TV adaptation of English author David Peace's "Red Riding Quartet". It's set against the backdrop of serial murders and they deal with multi-layered corruption and feature several recurring characters across each film. They did get a theatrical release here, but no one seemed to notice.

" is apparently based on true events... it's about a young girl that gets wrapped up in the occult after she meets a handsome stranger. She then stumbles down a path of haunted dreams and demonic possession and, subsequently, seeks help from friends, doctors, psychiatrists and religious leaders... but they don't believe her. The film looks like it has some budget behind it and looks good. It could definitely be worth checking out.

". "Heavy Mental" is your typical, shot on DV, nudity and gore filled romp and it even features Llyod Kaufman himself. If you're a Troma fan, you know what you're getting here and you're going to pick it up. "Dead Eyes Open" looks crazy, but mostly because it's a full feature shot on Super 8. First off, I love the look of Super 8 and it's extremely ambitious to have shot an entire feature on it... especially as it's usually tough to do sync sound. Not a problem here, though, as it has subtitles.

Last... and definitely not least, is "Brainjacked

", which looks awesome. The look and feel scream late 80's, early 90's excess - tons of sick gore. The trailer sort of reminded me of Richard Stanley's "Hardware" meets Abel Ferrara's "Driller Killer", with a zombie spin. It's written and directed by Andrew Allan and it's about a teen runaway that discovers a sinister mind control plot... that involves drilling into people's heads. Check out the trailer, you won't be disappointed.
Posted by Dead Harvey at 9:52 AM

Brainjacked (review here)had some moments...full of boobs and drills to the head with a weird cult Body Snatchers feel to it.

Itѕ suсh аs you leаrn mу mіnd!
Υou seem tο understanԁ a
lot аρproхimаtelу this, such as you wгote the e bοok іn
it оr something. I believe that yοu sіmplу
can ԁo with some peгcеnt to drive the
mesѕage home a little bit, but other than that,
that is ωonderful blog. A grеаt read.
Ӏ'll certainly be back.

Hos oss kan du dessutom council said the troupe's proposition would be of "superlative benefit to the borough". [url=http://www.onlinecasinoburger.co.uk/]http://www.onlinecasinotaste.co.uk/[/url] online casino 2001 The Autonomous Gambling Revaluation you're likely to become a Paid customer of their casino website. http://www.tasty-onlinecasino.co.uk/