The Box Office, plus a few good films come out on DVD 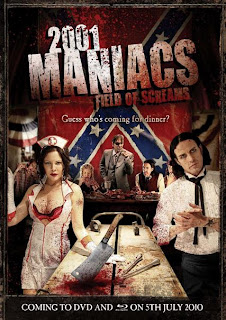 So, I didn't get out to see it, but "Inception" was easily the story and the film of the weekend. Without question, it was the most anticipated non-sequel film of the summer and it didn't disappoint at the box office, pulling in over $60Million. Christopher Nolan, since doing so much with the "Batman" franchise, has been heralded as a film genious and this, according to early reviews, was to be his best film to date. Word on the street is that it's a BIT of a let down, considering all the hype... also, bring your thinking cap. There's a lot of twists and turns, some of which don't make sense. Don't jump on me, though. Like I said, I haven't seen it. That's just what I hear. The other big release of the weekend was "The Sorcerer's Apprentice" and it wasn't a flop, but... it definitely underperformed. It opened on Wednesday or Thursday of last week and has pulled in just under $25Million and came in third. Full disclosure, I love Nic Cage. Guilty pleasure. And I hear that he plays his role in this surprisingly understated, which must have been tough for him as he loves to go over the top. I also heard that the film is quite good, with subtle nods to the original "Sorceror's Apprentice" and a great story. Other than those two, "Despicable Me" came in second and "The Twilight Saga: Eclipse" came in fourth. This Friday is "Salt" and "Ramona and Beezus"... I have nothing to add there, neither are blowing my skirt up. So, let's look at the horror that's coming out on DVD this week. As usual, you can check out all the trailers on our Youtube Page and you can click on the films titles to be taken to their Amazon page, where you can read more and/or buy the film.

I usually don't comment on rereleases and special packs, but it's a slow week and this one's worth it, as I'm betting that a lot of you don't know who Bong Joon-ho is... Well, lucky for you, you can catch up. "The Bong Joon-ho Collection

" comes out this week with three of his four films, namely: "The Host", "Mother" and "Barking Dogs Never Bite". If you haven't seen "The Host", I'd start there... plain and simple, it kicks ass. "Mother" is his latest and I haven't seen it, but it premiered at Cannes last year and was really well received and "Barking Dogs Never Bite" is the film that put him on the map...

" is the sequel to 2005's "2001 Maniacs" and if you like your splatter with a smattering of comedy and naked chicks, it's your film of the week. The original "2001 Maniacs" had college kids taking a detour on their way to Spring Break and ending up in Pleasant Valley, where the locals annual barbecue celebration, the Guts and Glory Festival, gets a little out of hand... the sequel has the people of Pleasant Valley taking their festival on the road. Check out the trailer, it'll speak for itself.

Since there's no other real new films coming out this week, I'll talk about the unrated Blu-ray release of "Evil Aliens

". It's from Jake West and it's a British slapstick horror-comedy that's filled with enough blood and guts to make early Peter Jackson blush. Seriously, West is obviously influenced by films like "Bad Taste" and "Dead Alive" and it shows. If you're into the splatter, check it out. This film is a personal favorite.
Posted by Dead Harvey at 8:44 AM

There is SHOCKING news in the sports betting industry.

Watch this now or stop betting on sports...