Summer Drinks, A New Horror Site and A Film Festival 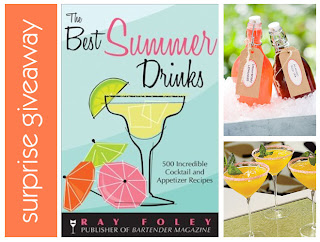 Well, it's Friday and I ain't got shit to do. Well, actually... that's not true. I've got a lot of shit to do and I want to get it done quickly, so I can hit a patio for some afternoon, summer drinks. I just said that because I like quoting movies. Anyhow, to take you into the weekend, I'll unload a couple of interesting emails that I received this week...

The first one is a little strange... and you'll see what I mean. I received and email from "Scary or Die Inc" and they're "proud to announce the launch of their new website dedicated to helping fellow filmmakers in the horror community." They offered up a link to their new site, which is NewHorrorSiteLaunch.com. Once there, they tell you that they apologize for not telling you the actual name of the site, but you can register and you'll be informed when it does goes live. Now, call me stupid, but... by any chance is it going to be called "ScaryOrDie.com?" I mean, that's where the email came from... and you incorporated the name. So, it seems a little silly to keep it a big secret at all, let alone send an email from "Scary or Die Inc" that directs you to a site called "newhorrorsitelaunch.com", then tells you the name is a secret. Anyone else think that's strange? Anyhow, the site sounds like it's exactly like funnyordie.com, which is going to be great for up and coming indie horror filmmakers. According to the email, you'll get "up to the minute horror news, events and contests (and it's) a place where independent filmmakers can upload their horror shorts, have them rated by viewers and get international exposure from fans around the world." In any case, it sounds like a great deal. Make sure you head over to NewHorrorSiteLaunch.com and register!

I also got on email from one George L. Ortiz, the owner of a film festival in San Antonio, TX called "The Horrific Film Fest". It runs from August 25 - 29 and they do it every year. Well, that was news to me, as I hadn't heard of it. So, I'll be adding it to our list. According to him, the "film fest is pro-filmmakers. As a filmmaker (himself, he) wanted to create something different and help (his) fellow filmmakers from around the world." They work with Celebrity Video Distribution as their agent and they look to create deals for the filmmakers that enter the festival. By the way, here's the cool thing... they show every film that gets submitted, as long as it's not X-rated. Go check out their website at HorrificFilmFest.com.
That's all I've got for this week. Enjoy the weekend, see you next week!
Posted by Dead Harvey at 9:08 AM

Hi. I came across your blog and wanted to offer you to be listed on our giveaway blog network: Giveaway Scout

(http://www.giveawayscout.com). Have a look and use our online form to add your blog