Dead Harvey's Academy Award Preview - Who We're Rooting For and Why 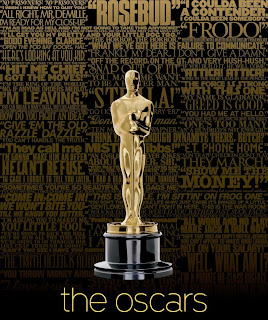 Alright, well... let's acknowledge the 500 pound monkey that's sitting on my couch, drinking my beer and throwing his shit on my walls - this Sunday, March 7th, at the Kodak Theatre in Hollywood, is the 82nd Annual Academy Awards. I know, I know... we're indie guys, and indie horror guys at that, we shouldn't care that much about all these elitists who are just stroking each other, but we do. Why? Well, I could say it's because they nominate the best of the best in the very industry that we strive to be a part of. That is true. I could also say that, at the heart, we're film fans and a lot of the films nominated are just great films and we like to see them honored. That is also true. However, one of the main reasons I like to watch the Oscars is because I think it's a gauge of what Hollywood likes and would buy into. Granted, you never see horror acknowledged, but "Inglourious Basterds" is graphically violent, "District 9" is sci-fi, "The Lovely Bones" deals with horror-like themes, "The Hurt Locker" is gory and "Avatar" is, well... you know what "Avatar" is. Point is, if you're an aspiring screenwriter, get a copy of "The Hurt Locker" or one of the other nominated screenplays and read it. If you're a filmmaker, check out some of the short films and lower budget features. Analyze them. Not like, shot for shot or anything, but why was it nominated? What did they do? Remember... yes, we are trying to blaze new trails in entertainment by creating new distribution models and all that, but this is an industry that dates back hundreds of years and doesn't exactly corner like it's on rails. Also, at the end of the day, don't we all dream of standing up there on that podium and accepting an award? Just a little bit? Whatever the reason, I want to take a bit of a look at the history of the Oscars and also let you know who we're rooting for... Also, I really want to know who you're rooting for and why.

So, what about these Oscars? Well, the first Academy Awards ceremony was held on Thursday, May 16th, 1929 at the Hotel Roosevelt in Hollywood. It was hosted by actor Douglas Fairbanks and director William C. deMille. What's funny is, for 81 years, they were they only duo to host the awards. The second duo? Steve Martin and Alec Baldwin, who will be hosting on Sunday. It's the oldest award ceremony in media and most other ceremonies, including The Grammy's, The Golden Globes, etc... are all basically modelled after it. It's presented by the Academy of Motion Picture Arts and Sciences, which is composed of over 6,000 motion picture professionals. The Academy was originally conceived by the legendary Louis B. Mayer, head of MGM at the time, and it was created to mediate labor disputes and improve the industry's image. Really, the first Academy Awards ceremony was created just to give artistic legitimacy to a business that was really just about money... how times have changed, huh? Yeah, it's vain. Yeah, it's about self-promotion. Yeah, it's just marketing. But, come on, we love it.
Now, I'm going to go through a few of the nominated films that I give a shit about and tell you why...
The big film for me is "The Hurt Locker". I'd like to see it get Best Film, Best Director for Kathryn Bigelow and Best Actor for Jeremy Renner. The film was low-budget, by Hollywood standards, only $11Million and a lot of the budget was because it was shot in the Middle East, mostly in Jordan, just miles from the Iraq border. The film is gritty, it's authentic and, really, it kicks ass. Renner's portrayal of Sergeant First Class William James in the film was unreal and is worthy of the statue. However, I do think that the award will go to Jeff Bridges and he does deserve it, but if I could just draw your attention to the fact that Renner played Doyle in "28 Weeks Later" and Jeffrey Dahmer in "Dahmer", maybe that'll sway some of you. As for Bigelow, you probably know that she's James Cameron's ex-wife and that they're going head to head in the Best Director category. Cameron's already got one of these on his mantle and Bigelow also directed "Near Dark", "Point Break" and "Strange Days", three wicked films that received ZERO Oscars... think about that.
Quickly, I'm pulling for Woody Harrelson to get Best Supporting Actor in "The Messenger", not because of "The Messenger", but because it's Woody. He deserves it and he's played so many quirky roles that we love, from Tallahassee in "Zombieland" to Mickey Knox in "Natural Born Killers". Go Woody.
I'm also putting my weight behind "District 9" for a couple of awards. I'd like to see it get Visual Effects and Best Adapted Screenplay. Let's not kid ourselves, it's highly unlikely to get Visual Effects... "Avatar" is a lock. I just want it duly noted that I got drunk with the CEO of Image Engine, the Vancouver-based visual effects company that did the bulk of the effects for "District 9" and that should be worth something. On the other hand, however, I really do think it has a long-shot chance at adapted screenplay. It was a great script...
Also, I should mention that I am pulling for "Avatar", but I don't think it needs my support. Like I said, I'd like to see Best Picture and Best Director go to "The Hurt Locker", then "Avatar" can win everything else that it's nominated for... seems fair.
Now, who are you rooting for and why? Fill up that comments section!
Posted by Dead Harvey at 10:18 AM

District 9 for anything. Seeing it nominated was a surprise in itself. It was such a surprise movie for me as I expected something decent but came out loving it