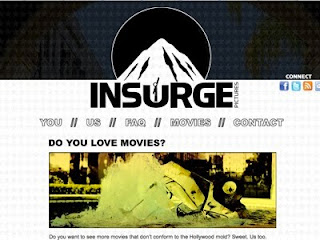 A month or so ago, we wrote a post called "What I Would Say To Adam Goodman, Production Chief of Paramount", in response to hearing that Paramount was planning to open up a micro-budget film division. Well, I'm happy to say, there's been developments...

I would like to add that I actually did reach out to Adam Goodman. I took a wild stab at guessing his email address and I got it right... after a few tries. Then, low and behold, I got a response. It was brief, concise, but he said that, yes, there was going to be a micro-budget filmmaking division and that I should stay tuned. I was quite impressed. Now, I didn't really get the chance to mention all the things that I wanted to in that first email, so I laid them out in my second email... which I didn't get a response to. In any case, I did stay tuned. And I just found out that Paramount's micro-budget division has a name, a site and a leader.

The division is called Insurge Pictures. The tagline is, "Do you want to see more movies that don't conform to the Hollywood mold? Sweet. Us too." I heard that the website, insurgepictures.com, was actually live, but every time I try to go to the site, I'm forwarded to Paramount's main site. Do me a favor, click on that link there and let me know if you get through to it. If you do, I'd love to know what it says, as far as what they're about and all that. As mentioned before, the division does have $1million to finance its slate of films - 10 movies on tap in the first year, budgeted at approximately $100,000 each. The division hasn't been formally announced yet, but it should be soon. In fact, it may have already been announced and I just don't know it. It's going to be headed up by Amy Powell, who's currently the studio's SVP of Interactive Marketing. Interesting choice, obviously they see these micro-budgeted films closely tied to social marketing, the web, mobile, etc. The micro-budget division will also develop an online community to fuel the initiative and they're expected to support their goals with additional elements, yet to be announced. So, that's what I got, so far.

Somewhere on the Insurge site that I can't log on to, you'll find this quote, "Aren't you tired of being fed the same movies wrapped in different paper? We want to find and distribute crazy, unpredictable, and hopefully awesome movies - movies that make you want to line up to see at your local theater with all your friends (and us). Movies that a big studio would never release because they're too risky, too silly, and they don't star Sandra Bullock." Sandy, don't listen to them. "Blind Side" was good, but "Speed", "Demolition Man"? Classics. I also liked that movie where you played a drunk, "28 Days".

Anyhow, the same worries and trepidations that I illustrated in the last post persist. I hope they reach out to the right teams of filmmakers, I hope they involve the micro-budget filmmaking community and I also I hope that they make the right films. However, what I hope most is that their 'difference making' doesn't end at the conclusion of the filmmaking process. You see, they also need to come up with "crazy, unpredictable, and hopefully awesome" ways of distributing these films. Pave the way... please. The fact that they say, "movies that make you want to line up to see at your local theater", makes me weary. When's the last time you saw a micro-budget film at the theater? Okay, besides "Paranormal Activity"? We need new and revolutionary ways to get these films out there. That's the key. And I hope they put as much thought into that as they do in finding and making these films.

In any case, the whole thing can do nothing but good for the rest of us. It shines a spotlight on micro-budget filmmaking and, hopefully, a little bit of that light actually falls on to the micro-budget filmmaking community. Now, if you'll excuse me, I'm going to try and guess Amy Powell's email address and see if she'll get back to me... I've got some things to say, but I'll save them for my second email.
Posted by Dead Harvey at 8:57 AM