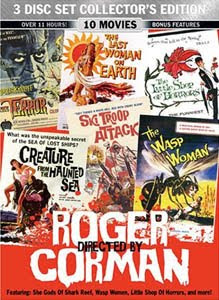 Okay, I'll bite... what was with that horror montage in the middle of the Oscar's ceremonies last night? Don't get me wrong, I loved it... I thought it was great, but why did they do it? It seemed so out of the blue. They should have given some horror pioneer a lifetime achievement award right after... or something like that. Didn't it seem out of place? "We know there's a lot of horror fans out there and... we never really acknowledge horror films as actual films, but here's a montage for you. Enjoy!" Roger Corman, the Godfather of low-budget filmmaking and one of the pioneers of schlock horror, received an honorary award at the Governors Awards ceremony - they easily could've tied it in with that. Corman deserves way more than just a wink and a nod, you know? Otherwise, how about acknowledging Romero or someone similar with a lifetime achievement award? I don't know, it just seemed so random. Otherwise, I'm glad that "The Hurt Locker" trumped "Avatar" when it was supposed to. That's not because I didn't like "Avatar", I loved it... it's because "The Hurt Locker" was awesome, low-budget and really deserved it. Really, a lot of low-budget films, and I say that in 'relative to Hollywood' terms, did well. "Precious" was made for around $10Million, "The Hurt Locker" was done for around $11Million and "District 9", made for around $30Million, was well talked about and was, really, an indie film. Anyhow, I'd love to hear your thoughts on how the Oscars went, just leave some comments. Otherwise, let's look at the week in horror on DVD. As usual, you can head to our Youtube Page, where you can see all the trailers and you can click on the titles to be taken to their page on Amazon, where you can read more and/or buy them.

First off, let's just say it's a slow week in horror. I think that's mainly because they're avoiding releasing films right after the Oscars. Also, two of the big Oscar films come out this week, "Up in the Air

" also comes out, so... it's a good week for the indies to avoid. Having said that, there are a few releases.

If you're hellbent on getting a horror film this week and it has to have some sort of budget behind it, the film for you is "Nine Dead

". It has an alright cast, topped with Melissa Joan Hart - AKA Sabrina The Teenage Witch. It's basically a "Saw" rip-off, where a killer kidnaps nine people, who wake up to find themselves all handcuffed to nine separate poles and they have to figure out exactly why they're all there. The film was actually completed in the summer of 2008 and spent several months without a distributor, before being picked up by Fabrication Films. It had a limited theatrical release back in November, but is basically a straight to DVD film. The trailer looks alright, so it could be worth the rental.

", but I'm not afraid to push it again. I'll always support Full Moon and Charles Band. The original "Demonic Toys" came out in 1992 and is, obviously, from Charles Band and Full Moon Entertainment. It was basically a new franchise, building off the success of the "Puppet Master" series. Then, Charles Band start mixing all the titles up, we got "Dollman vs Demonic Toys", "Puppet Master vs Demonic Toys" and the characters from the films actually made it into other Full Moon titles, such as "Gingerdead Man" and "Doll Graveyard". This film was originally called "Demonic Toys: Personal Demons" and was released solely via VOD by Amazon last year and it completely ignored any of the afore mentioned sequels. They dropped the "Personal Demons" part of the title and are now releasing it on DVD as, simply, "Demonic Toys 2".

", which is a Japanese film about a kid's ability to dream about and predict the evil intentions of men. He has a dream about a guy reading a book to his bedridden daughter, but the book is a self-made book about barbarously murdered girls. The nightmare shocks the boy awake and causes blood to pour from his neck. Now, slowly dying, it's up to his sister to track down the man and solve the mystery...

" and "Night of the Living Dead

" and that's about all I know. Read up on them by clicking on the titles. Also, if you're into vampires, for $15, you can't go wrong with "Undead: The Vampire Collection 20 Movie Pack

". For less than a dollar a movie, you get a bunch of old vampire films. To be honest, there's some decent films in the collection, such as the original "The Last Man on Earth" (remade as "I Am Legend") and "Nosferatu" (probably the most classic vampire film of all time), to name a couple.
Posted by Dead Harvey at 9:22 AM

Nice blog thanks for postiing