"Twilight", "Bad Lieutenant" or "Driller Killer"? Hmmm.... what to see this weekend. 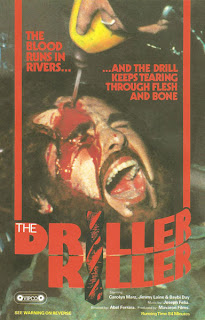 So, any big movies coming out this weekend? I can't think of anything of note... Maybe you're going to see that new Sandra Bullock film, "The Blind Side"? No? "Planet 51"? Okay... I'll acknowledge the elephant in the room - "Twilight: New Moon" comes out today and, really, no joke, I think it's a good thing for the horror genre. I do. Sure, it's PG-13. Sure, it's a romance. Sure, it's for kids. However, it does have werewolves and vampires in it. I say that's it's good for the genre because "Twilight" may act as a gateway film for these kids... weed can lead to coke and "Twilight" could lead to f'ed up, unrated slasher flicks. Also, on a more believable note, it keeps the viability of horror characters alive. If werewolves and vampires can make money in these films, they should be able to make money in other films. Right? Regardless, I did see the first one and I'll probably see this one, but I won't be rushing out or waiting in line or anything. If I do hit the theaters this weekend, it'll be to see "Bad Lieutenant: Port of Call New Orleans". Two reasons, I like Nicolas Cage and I've heard it's one of his best performances in years AND because the film garnered one of the best comments of the year when Abel Ferrara, director of 1992's "Bad Lieutenant", said, "As far as remakes go... I wish these people die in Hell. I hope they're all in the same streetcar and it blows up". So, go check out this Nic Cage version, then do Ferrara a favor and rent "The Driller Killer" and the original "Bad Lieutenant"... both ARE classics.

So, to take you in to the weekend, I've come across a few other things that I wanted to share...

First off, as you know, a lot of filmmakers think of the theatrical release as the pinnacle of filmmaking and we urge people to think of alternative distribution methods. Sometimes I feel like writing a book about all the different things that I've come across, but... well, I'm not really a success story, so who would care? Regardless, now I don't have to write the book because someone else has... and that someone is Jon Reiss. He wrote a book called "Think Outside The Box Office: The Ultimate Guide To Film Distribution And Marketing For The Digital Era". I haven't read it, but it has been recommended to me and I've read various reviews, all of which are good. If you're interested, he's got a site together and you can read more about it... and the book's only $20. Click on this to go to his site.

I'd also like to mention that the deadline for the 2nd annual Paranoia Horror and Sci-Fi Convention and Film Festival, which is coming up. We talked with Shane Russeck, the festival director, last year, and he offered up a great interview. You can check that out here. The coolest part about the festival is that it takes place on the haunted Queen Mary in Long Beach... just awesome. The actual festival is March 12 - 14, but the deadline for entry is November 30th, so get on it!

Lastly, I'm VERY happy to share a not-so-exclusive clip from indie horror legend, Bill Zebub. He JUST sent out this clip from his upcoming film, "Night of the Pumpkin". He's in the beginning stages of post on it and won't have a rough cut for another month or so... he just pumped this out to show people, just got it last night. Enjoy... and have a great weekend.

Okay, seriously... what is with these Russian links? I don't get it. Vrotmnenogi, enough already.