Interview with Brian Wimer, the writer/director of "Mantra" and "Eat Me: The Musical" 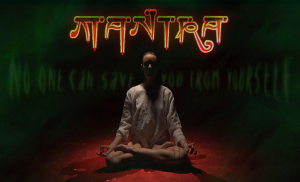 Considering that 75% of you are taking the next two days off, this could be my last post of the week... maybe. Well, I may just go through my inbox and pass some stuff on to you on Friday. We'll see, stay tuned...

In any case, we're going to take you in to the holidays with one of the better interviews that we've done in a while. It's with Brian Wimer, the writer and director of the yet-to-be-released, "Mantra". It screened at a few festals, it won a few awards and you'll probably be seeing it on store shelves and on Amazon soon enough. As for the film, it's an indie horror... obviously. We wouldn't be covering it, if it wasn't. However, I've gotta say, it's a different kind of indie horror. The production value is fantastic and it's got a great look and feel, but so do a lot of films... in fact, you better have a great look and feel if you want to compete in this market. What makes "Mantra" stand out is that it truly is a unique voice in the genre... it's highly stylized, it's psychedelic and it revolves around Buddhist themes... and it has a naked blue girl with great breasts in it.

Personally, I think that the indie world is about having an independent voice and being able to do unique and daring things. Hollywood is not. Hollywood is about groups of people trying to emulate each other for market share. To succeed in the indie world, I would urge you to write about unique characters, new stories and intriguing situations... do things that haven't been done or tell stories that people are too afraid to tell. Push that envelope. Brian Wimer does all of that in "Mantra", plus some... and, lucky for you, he offers up a very entertaining and informative interview about it here. It's a great read. Enjoy... and have a great holidays!

Tell us a bit about “Mantra”

Mantra is a Buddhist horror film. (Yes, Buddhist.) Buddhism is largely a meditation on desire and suffering. So are horror films. The marketing pitch is: ten minutes of nudity, twenty pints of blood, Four Noble Truths.

Six strangers on a spiritual retreat find themselves hunted by their lives’ transgressions. No one saves them. The story was inspired by my experiences studying “bardo” death-state meditations with monks in Dharmsala, India.

It’s all very psychedelic. Nude, six armed, blue goddesses. Death state trance tunnels. And a woman giving birth to herself. Carl Jung would have had a field day with this film.

If you don’t mind us asking, what was the budget and how did you go about securing financing?

Let’s just say the budget was below $100k. A lot of it was out of pocket (mine). Some was secured through what I like to call “Enlightened Micro-Financing”– small good-karma investments with no guaranteed returns.

One thing that really stood out for me about the film was the acting. Talk a bit about the casting process and your directing style.

Method Acting … or manufactured authenticity. Subjecting my cast to hypothermia, malnutrition and sleep deprivation at a shadowy, deserted sleepaway camp helped me conjure up those rare, raw performances. The trembling, goose-bumped, wide-eyed freaky stuff - all 100% real. (So are the pig brains.) We edited out the part where my nude, freezing, blood-soaked actresses started screaming obscenities at me.

The only significant casting obstacle was Kali, the naked blue goddess. After failing to persuade several actress to do full nudity – I trucked on down to Richmond’s adults-only Club Velvet and was treated to a dare-we-say inspiring audition by the beautiful, talented Lara Blake. 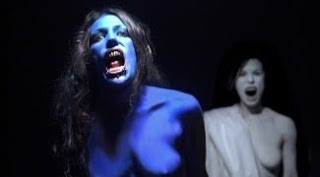 The other thing that really stood out for me was the location. Did you write “Mantra” with this location in mind or did you find the location after writing it?

Fall Appalachian foliage and the perfect 70’s Y-camp atmosphere basically landed in our laps (exactly as it was written). Bunk beds. Graffiti. We named it Camp Waywayanda – which is the actual name of a place in the Poconos I went as a kid. Coincidentally, I was there just one week before shooting, “journeying” with a Peruvian shaman while vomiting bitter, green ayahuaska in a plastic bucket. Quite inspiring.

Tell us a bit about yourself. What are your influences and what got you into indie film?

I studied Drama at Yale alongside Ed Norton and (briefly) Jennifer Connelly. Ended up in advertising, writing for Taco Bell Chihuahua commercials. Worked on two indies in NY. Then launched my own studio Amoeba Films, which went on to win a shelf-full of indie film awards. Low-budget, guerilla shorts. But always good writing. Eat Me: The Musical was the first feature-length endeavor. Mantra was Amoeba stretching its artistic legs … and licenses. Influences? Everything from Dario Argento to Tobe Hooper to Russ Meyers (still carry a Faster Pussycat Kill Kill lunchbox). And I did a lot of Bertolt Brecht in college, so I’m comfortable alienating audiences.

Nope. Learned it all on set and in front of the computer – especially compositing. Mantra has numerous visual effects adding up to quite a bit of eye candy. Much of it owes to an old copy of Tom Savini’s gore makeup bible Grande Illusions, which I’ve kept since I was a teenager. The rest is Final Cut Pro, Motion and After Effects.

Mantra won Best Feature Film at the Fright Night in Kentucky and Best Soundtrack at Dark Carnival in Indiana. The circuit’s a trip – meeting the original Leatherface and multiple Jasons. Linda Blair took a copy of Mantra – which I assured her was: “about the gore level of childbirth.” The highlight was Michael Berryman (The Hills Have Eyes) tracking us down and taking his hat off to my cinematographer Sallah Baloch.

The press has been fantastic. The Denver Daily News called it: “Scary yet thought-provoking … Defiantly different from anything else on the horror market.” The Richmond Times-Dispatch said Mantra was: “A new genre of art-house horror.” Another critic even went so far as to say it was, beyond the breasts and gore, “As horrific an art film as I've seen, and as artful a horror film as I've seen.”

Talk about distribution. What lessons have you learned and if you could pass on any words of advice to other indie filmmakers, what would that be?

We’ve been approached by three distributors (and I’m not at liberty yet to talk details, since nothing’s been signed). My advice: be wary. I know a few people who penned deals and haven’t seen a penny. Just because you’re on the shelves in Best Buy doesn’t mean you can quit your day job. I’m a big believer in the “Long Tail” of self-distribution – because I come from a marketing background. Create Space and Film Baby will one day be the bread and butter of all indie filmmakers.

I wrote Mantra to be a graphic, mind-altering meditation on desire, delusion, death and the origins of suffering – resolving in rebirth and redemption. To my mind, that would be a first for a horror flick. As I look at our projects in development, it won’t be the last.

We also had the chance to check out another one of your films, “Eat Me: A Zombie Musical”. Tell us a bit about that project.

Eat Me is an epic collaboration of hallucinogenic creativity between Amoeba Films and absurdist rockers The Falsies. An interactive rock odyssey, it straddles somewhere between Tommy and Rocky Horror. There’s no definition for it. A French critic tried to nail it down to a “cinemusical experience.” Satanic chickens, Buddhists dogs, preppy Scientologists and demonic dominatrixes with cameos by Jesus, Xenu, Mussolini, an entourage of redneck cannibals … and zombies. “Eat Me has the good taste not to be appealing to everyone.” - Gotta love the French.

Where can people find out more about “Mantra” and “Eat Me” or, better yet, buy copies?