New Horror Out On DVD This Week: News On Twilight AND Slaughtered Vomit Dolls 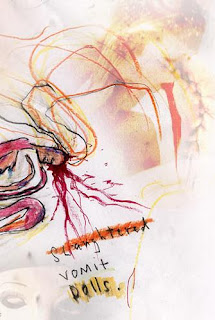 Well, all the box office numbers for "Twilight: New Moon" are rolling in and it looks like it had the third highest opening weekend of all time, right behind "The Dark Knight" and "Spiderman 3", grossing over $142Million. What I find particularly interesting about the "Twilight" films is, they don't really have huge budgets... "New Moon" had a budget of $50Million and the original one had a budget of only $37Million, which means that Summit is really doing something right here... having said that, the marketing budgets for both of them must have eclipsed the production budgets. In any case, I was listening to some commentary on the "Twilight" series, where they were breaking down the make-up of the film and going through why it's so successful... it was pretty interesting. Like, how they're pushing the envelope on how cute and cuddly vampires can get and the way they designed the love triangle. It really is horror lite, mixed with the love story from "Titanic". In any case, we rarely delve into horror lite here... in fact, this week is not one for the mainstream crowd. As usual, you can click on the titles and go to each films page on Amazon, where you can read more and/or buy it... and you can go to our Youtube page, where you can see all the trailers... just click on that link.

Okay, well... just because it rules, I have to start with the rerelease of "The Monster Squad

". This is the 20th Anniversary Edition and it's out on Blu-ray. Quite honestly, I can't believe it's been 20 years since this came out. Actually, it's been almost 22 years, as it came out in the summer of 1987. To be honest, I'm not sure how it did theatrically... it was no "Goonies" or anything, but it did inform us that Wolfman, in fact, did have nards and that's invaluable knowledge. The film gained a big following when it came out on VHS and there are definitely a lot of life-long fans of the film and it's great to see it come out... again. If you haven't seen it in a while, it's probably worth it.

" in the same sentence, but here it goes... if you're looking for the complete opposite of the horror lite that is "Twilight", let me direct your attention to Lucifer Valentine's "Slaughtered Vomit Dolls". The film does it's best to answer the question, how deranged, demented and depraved can one person's existence be? Personally, I don't know the answer. However, I do know that the trailer is barely watchable... it wasn't the nudity (there was a lot and the film apparently gets very porn-like) or the blood and gore (in fact, that looked pretty good)... it was the vomiting. Lots and lots of vomiting. Go over to our Youtube page and check it out. Let me know what you think. Is this too much? Anyone seen this?

" actually came out a few years back... it's a low-budget British film that's been gaining a bit of cult status. It first screened at Cannes on May 22, 2006 and then had its theatrical debut in Japan on December 22, 2006. The film also received a nomination for "Best Feature Film" at the 2008 Swansea Film Festival. As for the plot, it's sort of like "La Femme Nikita", but with vampires. After being bitten by a vampire, she's brought back from the brink of death by a secret government agency called Project 571 and trained to be a vampire assassin. I love the low-budget CG effects...

I've covered "Philosophy of a Knife

" before, I think. It's about the true history of Japanese Unit 731, from its beginnings in the 1930's to its demise in 1945. The film is actually more of a documentary than a fiction piece, but it's a cool film, regardless. Unit 731 basically used humans as guinea pigs in an array of useless experiments... many of which they give snippets in, in the trailer. The story is told from the perspectives of a nurse who witnesses the horrors and a doctor who's falling in love with an imprisoned Russian girl.

". It is adapted from an old anime and manga series that originally came out in the 70's. The series spawned video games, novels, music, lunch boxes, tv series', etc, etc... it was big. REAL big. Then, in October of 2004, they released this very film, directed by Hiroyuki Nasu, and... it was universally hated in Japan, even by the hard-core Devilman fans. It then went on to win the Grand Prize in Japan's Bunshun Kiichigo Awards (the Japanese version of the Razzie Awards, which are given to the worst movie of the year). Now, here it is, for North American audiences...

" isn't actually a Spanish film, although it deals with Spanish... horror-like ghosts and stuff. Not sure why I had to mention that, but it is in English and it's currently not available and is out of stock on Amazon, which leads me to believe that there is no stock. I've got the trailer up AND you can click on that link to it on Amazon to see if it is, in fact, now available.

I couldn't find a trailer for "This Hollow Sacrament

" on Youtube and that's a bit of a pet-peeve for me. For me, there's a bare minimum that you have to do to market your film and putting your trailer up, so that people can share it and embed it is one of those minimums. How long does that take? A minute? Anyhow, in silent protest, I'll just cut and paste the description from Amazon... Based on true events, the story revolves around the murder of four young women in Northern California in the late 1990s and the subsequent criminal investigation. The film follows the story of a tortured ex-soldier, now police detective, as he and his partner attempt to track down a bizarre series of disappearances, and the brutal slaying of the young women.
Posted by Dead Harvey at 9:09 AM