What "Paranormal Activity" Has Done To AFM and Positioning Your Film 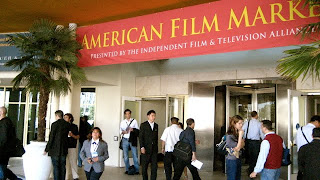 Well, this is kinda lame... I was telling you about this great article called "Paranormal Fever at AFM" and it was the whole basis of this post and now it's not available. (Ted's note: just as I was about to post this, it came back live. Here's a link to the article)

Anyhow, horror tends to be a big thing at AFM because it's the best genre for international audiences. Things like dramas and comedies don't sell well, as what's funny in Des Moines, may not be funny in Saigon. However, a guy with a chainsaw is scary everywhere. Having said that, no one's buying at AFM this year because everyone's tauting their film as the next "Paranormal Activity" and they're clogging the pipeline. Basically, since everyone's claiming to have the next version of that one movie, AFM is oversaturated with one type of film, which drives prices down and leaves the distributors weary.

So, Brad was actually at AFM last weekend. I told him to write up a post on the experience, as he had a suppliers pass and talked to a few people about both Dead Harvey and another project that he's working on... hopefully we get to see that post soon. He said it was a bit of a gong show and that, really, AFM is all about low-budget horror. People are pitching ideas based on poster art and a name, people are pitching on having certain actors, they're pitching on just a logline. Everyone who's in the low-budget horror scene is there and it's a big, sleazy, sweaty pitch and sales fest. Just the brief conversation that Brad and I had about it made me want to have some project ready for next years AFM and attend. It sounds crazy... long and short, from his perspective, there was a lot going on and there was no shortage of projects.

Okay, so where are we at, then? There were tons of low-budget horror projects there, but no one was buying because everyone was saying that they had the next "Paranormal Activity". Now, I think I know why no one was buying. Remember, I come from the marketing and advertising world and what all these guys are not doing, and what you should always keep in mind, is something called positioning. Or, how you can position your film to stand out in a crowded marketplace like that. There's a whole book on this, called "Positioning - The Battle for Your Mind" by Al Ries and Jack Trout, and it's considered to be a bit of a classic marketing book. The long and short is, when someone's already positioned as the best no-budget film, you can't try to position yourself as the same and that's what all these guys are doing. You're going to fail. You need to position yourself differently. "Paranormal Activity" is a low-budget, first person, mock-documentary on ghosts... we're an alien abduction mock-doc. We're a first-person slasher film. They were confined to the home, we take the haunting on the road. Here's a better example, say you were selling me a car and you said to me, "I know you want a Mazda, but take a look at this Hyundai... it's basically a Mazda" I probably wouldn't buy the Hyundai, I probably wouldn't even give it a second look. However, if you said, "I know you're looking for a Mazda, but let me show you this Hyundai... it's the cheapest and most fuel efficient car in its class, plus it has a great record of dependability". Well, now I may take a look at it. You've positioned it differently and given me a reason to think about it.

This positioning thing is one of the main principles in marketing and advertising and if you're interested in reading more on it, I found a page that summarizes it all up, you can find it here. I think it's important stuff... stuff you should be thinking about when you're in the pre-prodution or writing stage, even. If there's a market leader out there, don't try to position yourself as the same. Figure out a way to position yourself differently, it'll make you stand out and, therefore, help you get noticed... which is really what you want.

Anyhow, that's all we got for this week. Have a great weekend and we'll see you on Monday!
Posted by Dead Harvey at 9:33 AM