New Horror Out On DVD This Week: Where Is Dead Snow? 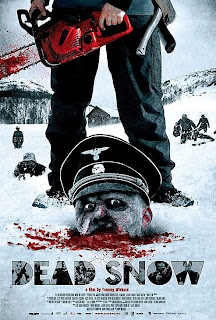 This last weekend at the box office wasn't exactly lighting the world on fire... however, there's a few interesting things of note. First up, after being well represented over the last month or so, horror birthed a couple of shit babies this last weekend. Two genre movies were released, "The Box" and "The Fourth Kind". "The Fourth Kind" fared a little better than "The Box", grossing $12.5Million as compared to $8Million... but both would be considered disappointments, both box office-wise and critically. On the other hand, the success story du jour is "This Is It", the documentary / concert film on Michael Jackson. The micro-hit "Paranormal Activity" is finally slowing down and the now the "never was supposed to be made into an actual film", "This is It", is storming the box office. It's in its second week of release and has now grossed close to $60Million. There's a story and/or a lesson to be learned here, as the two biggest successes of late are a film that was made for $15,000 and another one that was cut from footage that was never meant to be seen, but I'm not sure what it is. Crazy... anyhow, let's look at the horror DVD's that are coming out this week and, as usual, you can go to our Youtube Page and see all the trailers and/or click on the titles and go to their Amazon page, where you can read more about them and/or buy them.

", a film that we had the privilege of checking out a while ago and discussing with the filmmaker. It's a vampire, gangster-horror and it's definitely one for the Dead Harvey crowd. The acting is great and it's really well put together. If you're interested in reading our interview with DiNunzio's, click here. Definitely a good read...

" comes from Lionsgate and it's about a girl that's travelling across the country, but ends up captive in some guy's basement and has to make a choice: whether she wants to join up with this guy's family and do some killing... or if she wants to die. The film actually looks alright, but they're really hanging their hat on the fact that the lead is played by Ashley Greene, who plays Alice Cullen in the "Twilight" series. Hey, if you're in to "Twilight", maybe you want to see Alice Cullen in a more, well... compromising position. The trailer has her chained up in short shorts.

Speaking of films that are hanging their hats on, not only actors, but "Twilight", "Hurt

" stars "Medium"'s Sofia Vassilieva... and "Twilight"'s Jackson Rathbone and it was obviously done a while ago. The film is described as a dark, Gothic tale that slowly unwinds into... something. I don't know, quite honestly, the trailer bored me. Having said that, the reviews are alright and the production quality looks good.

I don't know where "The Echo

" went wrong, but I think the trailer looks pretty good and it was produced by the guys who remade "The Grudge" and "The Ring". It's a remake from a Filipino Film, originally titled "Sigaw" and Yam Laranas, who co-wrote and directed the original film, directs this remake. As for the story, it revolves around a young ex-con who moves into an old apartment building, only to learn his neighbor is an abusive police officer who savagely beats his wife and daughter. When the ex-con tries to intervene, he becomes trapped in a curse.

" is a micro-cinema horror that looks really well done... it's from first time director Gregory Caiafa and it looks like it's a classic slasher film, where the slasher is a creepy dude wearing a very creepy clown mask. May have to check this one out.

" comes from writer/director Howie Askins and I really want to know more about this film. It looks awesome... sort of like a Rob Zombie wet dream or something. I can't tell what it's shot on, probably 16mm with some other mediums mixed in? Very intriguing, really want to see this now...

I don't know what the deal is with "Dead Snow", but I'm going to find out. It's a Danish film, I believe, and it's about a bunch of snowmobilers that run in to a herd of Nazi zombies... or would it be a flock of zombie Nazi's? Group of undead Nazi's? Whatever. It played Sundance and is, apparently, gorier than all hell. It popped up on Amazon, but now says it's discontinued by the manufacturer. I'll get to the bottom of it and figure it all out... then report back. If you care, I've got the trailer up on our Youtube page.

Lastly, there's a few new Blu-ray releases of interest, including the all-time classic, which is being remade, "Near Dark

" and Robert Rodriguez's foray into horror, "The Faculty