New Horror Out On DVD This Week, including VAMPIRO! 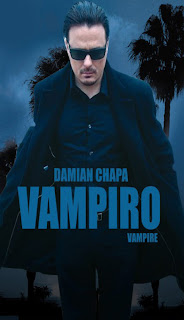 I got back from my week-long farm visit on Sunday night and Monday morning was a complete shit show... Life was firing turds at me and I managed to start this post, but never finished it. So, if you were wondering why I didn't post anything yesterday, there you go. Now, before we get to the DVD releases, can I just talk about TV-Land for a moment? Are you looking forward to "V" tonight? I remember the original "V", from 1983... and I was in the 3rd grade. It was a huge deal and I really have to say I'm pumped about this reimagining. They're only airing four episodes in this month, then will resume the series in March, so... make sure you check them out.

Anyhow, on to the DVD releases. I don't know if it's just a Halloween hangover, but it's a strange week in releases. There's nothing that had a theatrical release, but there's a few with some budget behind them, then a few low-budget gems. You can check out all the trailers on our Youtube page and you can click on the titles to go to their page on Amazon, where you can read more and/or buy them.

Well, you should know what you're getting in to with "Sand Serpents

", it's a SyFy original and it's Desert Storm meets "Tremors". You have a small group of Marines that are stranded in the Afghan desert and the Taliban ain't their biggest threat... massive worms are. Actually, if you've dreamed of Taliban-killing Tremor-like worms, this film will bring your dreams to reality, as, throughout most of the film, the worms do better against the Taliban than the marines do.

I couldn't find the trailer for Will Gordh's "Night Watcher

" on youtube, but I did find it over on its distributors site, FabricationFilms.com - link. I'm assuming that it had a fairly low budget, but it does have great production value... it appears to be about some sort of stalker that video tapes his victims, but I really can't find out too much about it.

" looks to be one of the better films out this week and it looks like it's also his feature film debut. The film is about a photographer that moves her family into a home that's filled with mirrors, all which seem to reflect an alternate reality. It's not a blood and guts film, but word around the campfire says you're in for a lot of tension and unsettling visuals. I believe it was released by IFC Films, which is kinda cool. I don't recall a theatrical release, but here it is on DVD.

So, when I first tried to research the film "Gravestoned

", I couldn't find shit. Then, after a bit of googling, I found information on marketwire and reuters - a press release site and a news site. IMDB, Amazon and Youtube all produced nothing. Who does your marketing and PR? Seriously? Anyhow, the film looks alright and it's being billed as 'the comedy horror flick for stoners'. It's an indie flick, with a bit of budget behind it, that was filmed completely in Texas with a Texan cast and crew. It's about hot cheerleaders, guys, stoners and a Scottish Terrier that are in a graveyard, being hunted by a zombie.

" is from composer/director Wolf Wolff... yes, that's what he calls himself. Most of his work is in German and I can't find much on this because it shares a name with one of my favorite horror films from when I was a kid, 1982's "The Beast Within" - a film that I haven't seen in 20 years and a film that probably wouldn't hold up to what it is in my head. I think I'll never see it again and just try to remember it as a classic. Anyhow, do me a favor and check this one out, then report back.

Okay, I think I want to see this... "Mutants

" has one of films best bad-asses, Michael Ironside, and Steven Bauer, from "Scarface", starring in it. It had the meagre budget of $4Million and it looks pretty f'ing good. It's from Amir Valinia, who's the same guy that brought you "Lockjaw: Rise of the Kulev Serpent" (AKA "Carnivorous") and a few other hip-hop, gangster related films, like "Jump Out Boys" and "Hood Hostages". When watching the trailer, at first I thought it was basically a zombie film, then they started showing a few mutants... I like mutants. Okay, yeah... I want to see it.

Now, the films get a bit more low budget...

I could be missing something, but doesn't "Contagio

", from Jorge Ramirez Rivera, looks SO low-budget that it's officially skyrocketed to the top of my must see list. PLEASE go over to our Youtube page and watch the trailer for this. Please. Spanish daytime drama meets low-budget vampire horror...

Lastly, and I'll just rush through these, but urge you to look into them further, we have "Stragglers

", from Damian Chapa; and "The Legend of Vipers Hill

" from David A. Lloyd. All of them have their trailers up on Youtube and can be found on our Youtube page and all would be considered micro-budget films. These are the films that Dead Harvey is all about, please watch their trailers, click on the titles to read more about them on Amazon and/or pick up a copy and support indie film!
Posted by Dead Harvey at 8:55 AM