More Horror On The Interwebs... 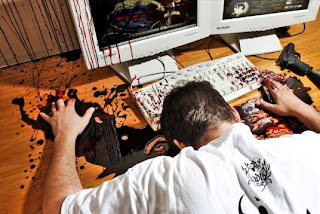 Once again, I've got a loaded inbox and I'm going to throw some links and info at you. As long as I keep getting this stuff, I'll keep passing it on... and, like I said last week, if you have a Myspace page, a website or some sort of online deal that you want us to promote, let me know about it. I'll mention it.

So, I was looking into this new film, "Silent But Deadly", which comes out... I don't know. Some time in 2009. Anyhow, it's a horror/comedy from Michael Patrick Entertainment, directed by Stephen Scott and written by Erin Berry, David Pluscauskas, Lori Kelly and Joel Plue and it's about an unconventional and mysterious serial killer who takes aim at a Hollywood film set by unleashing his own brand of retribution on the cast and crew. Jason Mewes, of Kevin Smith fame, plays the killer and it's also got Will.I.Am Sadler and Kim Poirier in it, plus a bunch of other fairly notable names. Anyhow, check out the Myspace Page here... it looks like it's going to be pretty good.

So, I was reading this article on the Bit Torrent client, Vuze, a couple days ago. I even mentioned them in my post yesterday because of that article. Anyhow, I downloaded it and checked it out, as they were saying that you could stream to your PS3 through it now. Now, you can already stream from your PC to your PS3, but this just takes out a few steps and makes it easier, so it's not exactly the second coming of Christ or anything. Anyhow, that's not the point. The point is that most Bit Torrent clients are just that, stripped down ways for you to pirate shit. Vuze, which you can find at Vuze.com, is trying to be a lot more. They're trying to be more like Hulu or Youtube with their Vuze HD Network. It's actually a pretty cool way to search through torrents, but that's not all! They also have lots of legal content, like trailers, music videos and indie films, uploaded by the filmmakers. You read that right, you can upload your content. Not only that, you can charge people to download it or you can have it ad supported. Either way, it's a way to monetize what you've made and you don't have to deal with distributors or anything like that. Anyhow, if you've currently self-distributing your film, there's no reason NOT to check this out and use it. Click here to be taken right to their "publish" page. I'm so intrigued by this that I might contact them... I'll let you know how it goes.

Speaking of uploading and selling content through web portals, I think I told you about Eyesoda.com before. They want to build social networks around thought provoking indie films and music. You can go to the site, sign up and look around... you can also upload your film and build an online business. Hey, no reason not to use all of these, right? Who says you can't put your film on Vuze, put it on here, fuck... put it everywhere. Anyhow, they sent me a code to get a free movie download and I figure it's the same code that they sent to everyone. So, click HERE and it should take you to Eyesoda.com and you should be able to get a free movie download...

I was reading the "The Wrap" and came across this article from Eric Kohn called, "Niche Marketing Guru Has Recipe for Success". You can find it here. It doesn't mention horror at all, but it's an interesting little article on how marketing guys try to reach their target demographic for particular films.

Lastly, I'm sorry... I'm NOT a Tarantino fan. For me, he's got a pretty f'ing bad track record, really. Working backwards, I thought "Death Proof" was a disaster, I couldn't stand "Kill Bill" and "Jackie Brown" was not just awful, it was God awful. That leaves "Sin City", which I liked, but didn't love, "Pulp Fiction" and "Reservoir Dogs". He writes great dialogue, really has a knack for producing and nailed his role as Richard Gecko in "From Dusk Till Dawn". He's definitely a talent, I just think he's GROSSLY over-rated. Having said all that, head on over to The Weinstein Company's site, here, click on "coming soon", click on "read more" on that "Inglourious Basterds" tab... and you can check out the trailer for it, which looks f'ing good, I gotta say. Also, right below it, you can find out some more info on "H2". What's that? Well, if you didn't hear, it's Rob Zombie's sequel to "Halloween"... yup.
Posted by Dead Harvey at 9:00 AM

Sometimes people don't believe me when I tell them about how much money you can earn by taking paid surveys at home...

So I took a video of myself getting paid over $500 for participating in paid surveys to finally set the record straight.