Interview with Nigel Hartwell, writer/director of "Dead by Dawn" and the brains behind New Blood Entertainment 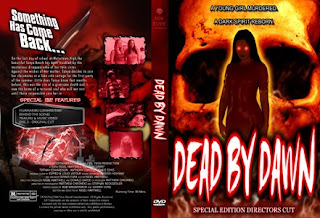 These days, it's hard to remember that film is an art. Sure, the way Hollywood does it, it's a business. I mean, they pay a lot of money for market research, they go through an army of writers (a lot of which go uncredited), they work with lawyers, agents and bean-counters to put everything in place and by the time they get to the part where you actually roll the cameras, they're just mailing it in. For example, I was on the set of a big budget TV show and was shocked to see that the director doesn't even deal with the actors in person... he was way back in another room, sitting back in a chair, sipping coffee and watching a monitor. With images like that, it's tough to see it as art, but it is... and it's just like any other art. Take music, for example. How much art is behind 'artists' like Britney Spears, Beyonce or any of these big pop bands? Not much, they're very produced. However, with music, it's a bit easier to see the 'art' and you don't have to dig very far. I'm not into bands like Coldplay or U2 or stuff like that, but you can see that there's substance there. There's art. Personally, my music interests are diverse, but I've never been into that over-produced sound. I like metal, I was into hip-hop and rap when it first broke out, I like some alt-rock, I like punk... shit like that.

Actually, when you look at punk rock and where it came from, I think there are striking similarities between it and indie horror film. Punk has run its course, died and came back, but indie horror is just gaining steam. If you think about it, punk embraced a DIY ethic, with many of the bands self-producing and self-distributing. They were fast, hard-edged artists that started in garages and dingy bars. Punk was anti-mainstream and a big subculture emerged that was all about rebellion. Now, look at indie horror... they tend to be anti-mainstream films, in that they go where Hollywood won't. They have a distinct DIY ethic and, for the most part, they're self-produced and self-distributed. There's a growing subculture around them and, although slightly nerdier than their punk-counterparts, they tend to be all about rebellion.

Punk rose up in popularity in the mid-70's with bands like The Ramones, The Sex Pistols and The Clash. It had it's ups and downs, but spawned bands like Nirvana, Green Day and The Offspring and you can still see its influence today... now, indie horror is where punk was right before it burst open and hit the mainstream in the 70's. Further, I think that those who help push this sub-genre forward and embrace the scene for what it is will be the ones to reap the benefits in the long run.

There's lots of guys doing their part and Nigel Hartwell, the writer and director of the "Dead by Dawn" series and the brains behind New Blood Entertainment is one of those people. Not only did it take him two years to make his first film, he persevered and has now gone on to make two more films in that series, plus another film AND set up his own distribution company. It's people like Hartwell who drive the indie scene forward, adding to it and helping push it in a positive way and for that, we have utmost respect and gratitude. We had the chance to discuss "Dead by Dawn" with him and get a bit of his insight into the industry...

First off, tell us a bit about yourself. What are your influences and what got you into indie filmmaking?

I'm now 30 years old and I've been working in the film business doing various jobs in Toronto, Ontario for the last 10 years. In that time I have independently made 4 horror feature films entitled (The Expedition, Dead by Dawn 1,2,3). All the films were self funded and made with basically nothing.

Where did you get the idea for “Dead by Dawn”?

What was the approx budget and how did you secure financing?

Arri SR2, and the shoot its self was spread out over a couple years but total days that we shot for was 18. We ran out of money several times, so I had to go save up again.

One of the things that impressed me the most was the amount of characters, the storylines between them all and how it was all tied together. Talk about creating and managing a story like that.

It took alot of time developing this story, as it was my first script, and I got lots of people to read it and give me there opinion and for the most part everyone liked it but minor changes had to be made to involve all the characters with the main plot.. I didn't want to make a horror film where people were getting killed for no reason.

Another thing that stood out was the performances that you got out of the actors. Talk about your directing style.

Two of main actors had a great deal of experience and as for the other actors I tried to find people who were like the characters in real life so they could relate to them better. This was my directorial debut for a feature, and great learning experience on how to deal with certain type of actors. I'm not sure on my style for this film, because it is still a blur to me as we were shooting 18 to 20 hour days.

You used a few computer generated effects. They’re quite tough to pull off on a low-budget, but you managed to do it. They’re not over the top, but just enough. How did you create them? …and talk about the decision to use them.

I had a graduate student create them for me for a credit in the film. It would have cost a small fortune to pay someone to do it.

Tell us about some of the hurdles you overcame to get the film done. What advice can you pass on to other indie filmmakers who are just setting out to make a film?

Well girlfriends came and went, I was always broke because of this passion for filmmaking, a great deal of time and energy was spent on something that may never turn a profit. I make films because I like doing it, and if I could choose one thing to do in this life for making a living it be this.

Did you enter “Dead by Dawn” into any festivals? If so, how did it do and is the festival circuit something that every indie horror filmmaker should consider doing?

I try to bypass the festivals, because I've learned that it is an endless money pit that really doesn't help you. Yeah you might find distribution someday but in the long run, the studios are now making so many low budget horror films that surpass alot of us indy filmmakers and it has really put the crunch down on getting your product out there. And when you do get a distributor they will do to you what they have done to so many in the past, find a way to get your film and not pay you a dime.

I believe you set up your own distribution company, New Blood Entertainment, and distributed the film through there. When did you make the decision to become a distributor?

I made the decision to start distributing my films along with other indys because of this bad system they have out there of screwing the little guy. I developed New Blood to help myself and others see a little bit of there money back, because in most cases if a filmmaker gets screwed over it takes away his passion to do what he loves to do and there are so many filmmakers out there that want it so bad, they will pretty much sign a rotten deal just to get there name out there.

As both a filmmaker and a distributor, what would you tell filmmakers who’ve recently finished a film and are looking for distribution?

I can only tell them that its a very hard go out there, and no one is going to give you an advance unless you have a star or b-star in your film. It doesn't matter how great the film is, if the right person doesn't see it, it will collect dust. I would tell these filmmakers to find a company like mine that isn't out to screw them.

Where can people find out more about “Dead by Dawn” or, better yet, buy a copy?

The best place for information and to purchase a DVD or soon a Blueray disk, is at my website: newbloodentertainment.biz

It is also available on amazon and most internet retailers as well most video on demand sites.

Horror films have always been around and always will be around because people love to be scared and to see things that they don't see on daily basis, like someones head getting cut off. I'm a fan of horror films myself and I will probably never make anything outside the Horror/Thriller genres. I really only have a passion for these genres.

What’s next for you? Do you have any projects in the works?

Well, Dead by Dawn 2: The Return and Dead by Dawn 3: The Revenge will be released late this year. And I'm currently talking with a producer about shooting my fifth film, a zombie film entitled "The Epidemic".
Posted by Dead Harvey at 9:00 AM