New Horror Out on DVD this Week: A Good Week For Micro Cinema Fans 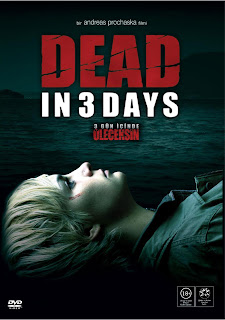 It's a fairly slow week in DVD releases, in that there's only 6 new films out. Having said that, they all look pretty good and most of it is indie, micro-cinema stuff. So, really, how many could you watch in one week? Go check 'em all out, if you can. As usual, you can click on the title and check them out on Amazon and you can also see all the trailers on our Youtube page, which you can go to by clicking here.

". It's by far the biggest budget film of this week and it's also an award winning horror in its native Austria. We're actually a little behind on this one, as it really came out in 2006 over there and they've already made the sequel and are preparing for a third installment. By North American standards, the plot seems, well, kinda standard, as it's about a group of friends, one of whom receives a text saying, "In three days you will be dead"... and then that person does, in fact, die. One of the friends figures out a clue, meanwhile the body count starts piling up, as more texts get sent. However, the trailer looks pretty creepy and those Europeans tend to take their theatrical horror to a level that we don't get over here. So, for what it's worth... it should be good.

"In Search of Lovecraft

" was written, produced, directed and edited by David J. Hohl, who's obviously a bit of a Lovecraft fan. The film is about reporter Rebecca Marsh, who, while shooting a Halloween news story, discovers that the 'fiction' that Lovecraft wrote is actually true and the creatures and cult described in his writings really exist. It was an official selection at the HP Lovecraft Film Festival, but how could they say no? It also stars Rachael Robbins, former playmate and star of such cult classics as "Bikini Bloodbath", "Vampire Lesbian Kickboxers" and "Brutal Massacre: A Comedy". Well, Rachael isn't the star, I believe Renee Sweet is the main character, but you guys may recognize Rachael's, uh... well, you'll recognize her. Also, for an indie, micro film, it looks like it has some awesome effects and some good gore. Definitely one to check out...

" is not a remake of the 1977 film from John Grissmer, although someone should think of redoing that movie, very creepy premise... This "False Face" is an in indie horror from Phil Thomas and Matt Brooks with a very interesting and, could be, timely premise... It's about a guy who needs money due to a gambling problem, then makes a deal with a shady group of mask-wearing characters. All he has to do is follow 3 simple rules, but when he can't, his girlfriend disappears, people follow him and strange phone calls coming from his own home number drive him into paranoia. I was just thinking... if you're looking for film ideas, the idea of how far people will go for money or a fear of lack of money are great places to start these days... real life is pretty scary right now and these are good, timely concepts. Anyhow...

" as an attempt to promote the band. They finally finished it in 2006 and it was released by Troma. So, the DVD has bonus features, such as concert footage and other featurettes, but the main film is about a killer that has a blood-lust for rock n roll groupies... and if you're into nudity, drugs, violence and rock n roll, this one's for you.

" is being released by Brain Damage and it's from Jen Murphy, starring Sean Holahan and Andre Dell. It actually looks quite interesting... it's about a young woman named 'Sunflower' who ends up murdered. However, those involved in the murder, covered it up... and are now finding their lives in ruin. Is one of their own responsible or has Sunflower returned from the dead for justice? You can find the trailer on the RDS Productions website, which you can find by clicking here. I couldn't bring it up on our Youtube because no matter how many different ways I typed it in, "Wet Kiss" kept bringing up pages upon pages of lesbians making out. Made for an interesting search, but... when you're making an indie film, you should really weigh stuff like that into your title selection.

" is not a remake of the 1967 film, "A Taste of Flesh", from Doris Wishman... and that's a film that really doesn't need to be remade. "Taste of Flesh" is written by Tom Whitus and directed by Christopher D. Grace and it's about a group of co-eds who head out to a rave, only to be stalked by 'The Hunter' and 'The Chef'. 'The Chef', or course, likes to cook for 'The Hunter'... who, of course, likes to eat humans. Interesting bit of trivia that's on imdb.com about it... it was originally called "Blood Feast", then was switched to "Kannibale". They later settled on "Taste of Flesh" after visiting AFM in 2007 and looking at the market. "Blood Feast" does sound a little to schlocky, but I kinda like "Kannibale". It looks like they're pulling a grindhouse vibe on the film... at least that's what I got out of the trailer. Looks really good and gory, too. This one's definitely going in my hopper, so to speak...
Posted by Dead Harvey at 9:15 AM